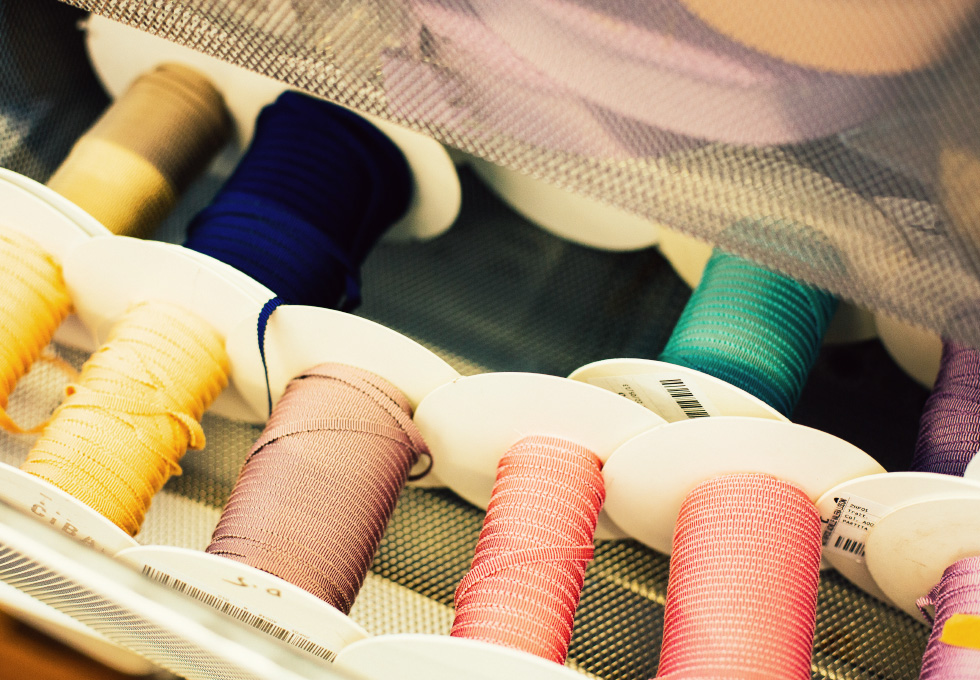 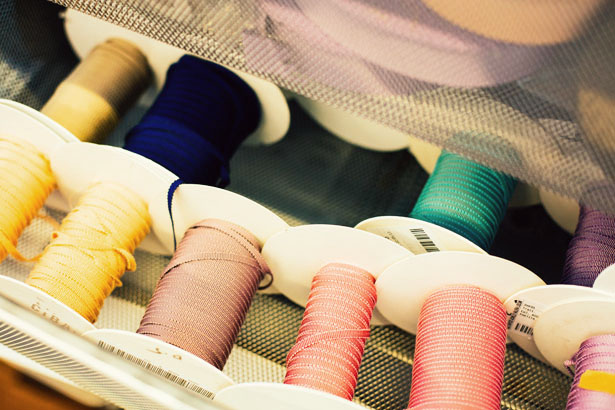 Recently I was delighted to meet designer Tia Cibani at her work studio in the Manhattan’s Meatpacking District, a lovely little corner studio that overlooks the beautiful cobblestone intersection of Gansevoort and Greenwich Streets. It was one of those beautiful spring days, the kind where, if you live in a walking city like I do, you opt to take the long walk home because it’s so beautiful out, and I was wearing (finally) my new spring dress designed by Tia. It reminded me of Audrey Hepburn dancing around Paris in Funny Face…but updated with its asymmetry and MoMA-esque quirk.

I was excited to meet the designer – having been born in North Africa then raised in Canada before living in China for a decade, I knew she had a true worldly palette to pull from. So here is a lovely afternoon spent in the design studio of Tia Cibani and her thoughts on fashion, designing, traveling and where her inspiration comes from…

PS- from her spring collection my favorite pieces are this for a cocktail party / this for a lunch date / or this for everyday forever and ever (so my new mantra). 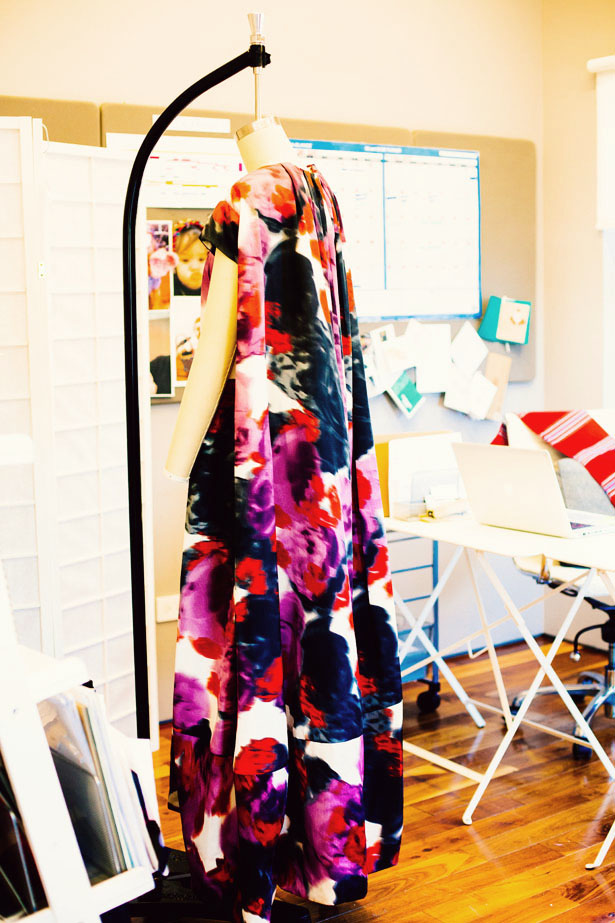 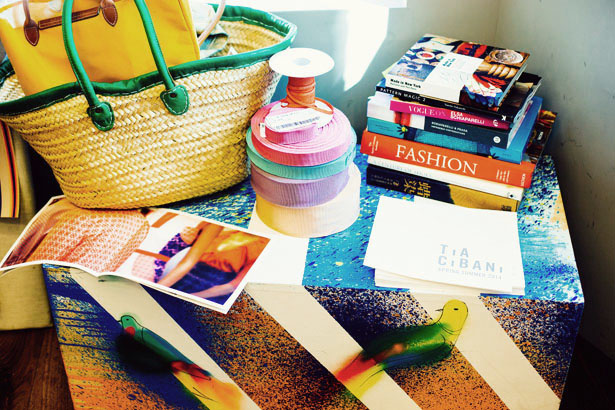 What is your background? Do you think it influences your design?

Well, I was born in Libya, but my family moved to Canada when I was 6 years old. I haven’t been back to Libya since…I’ve been to different parts of North Africa – Egypt, Tunisia, Morocco – but not to Libya. I do have some childhood memories, but they are very, very faint. 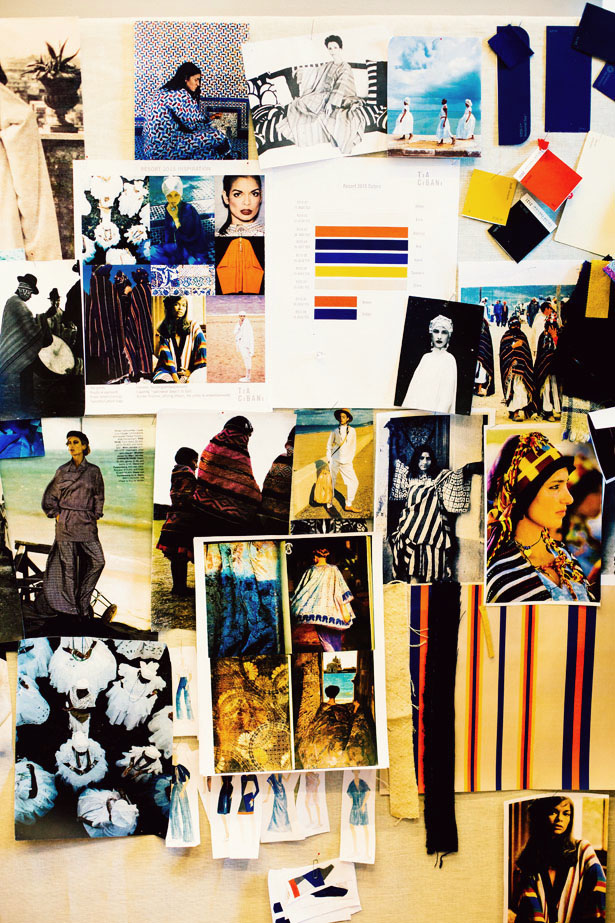 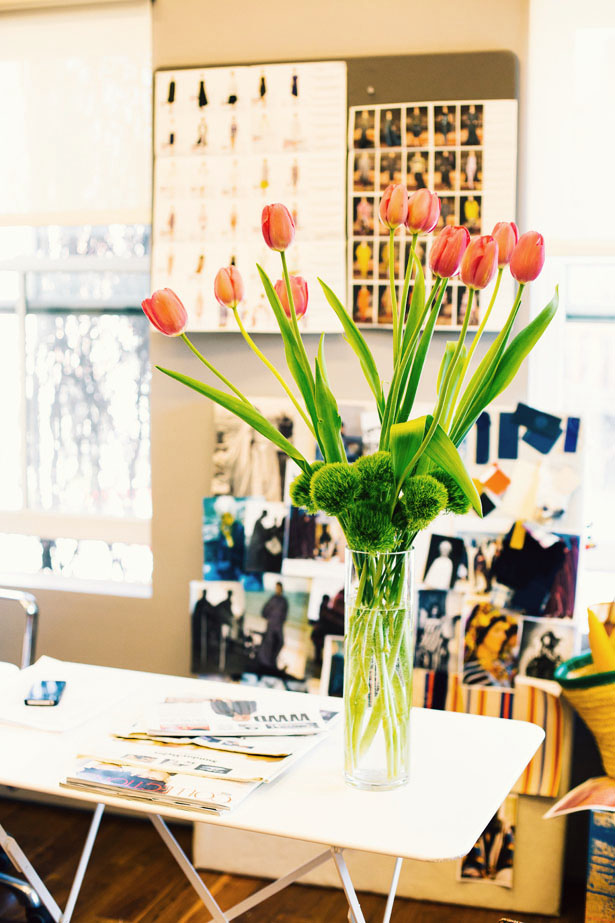 When did you know you wanted to be in fashion?

I loved fashion from the start. My mother was a fashion plate, so she was an influence. My father was a retailer of children’s wear and womenswear. I was surrounded by it from the beginning. My girlfriend and I would go to the mall after school, and our hobby was to go into Kmart and choose the worst outfit for one another. And then we’d go to the dressing room and “zhuzh” it up, make it hot, make it look great. That was the challenge. That was the after school activity. But then I was lining my walls with tears from Elle and Vogue, and following all of that at a very young age, and I just knew I wanted to do it. So I pursued it! 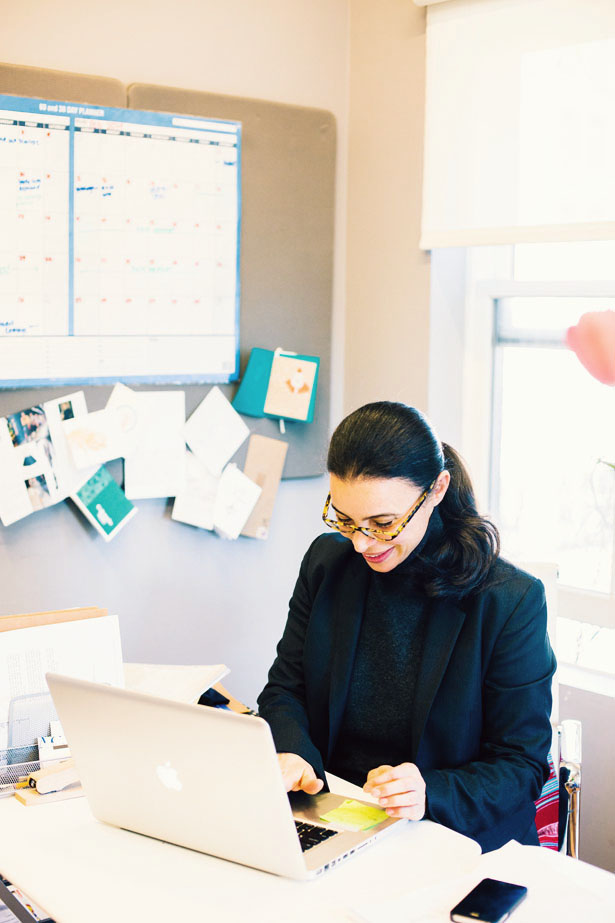 Where did you study fashion?

I came to New York to study fashion at Parsons, and before I finished my program, I moved to China – I went there for this internship and it became the job experience of my life, and I just stayed there for ten years with Ports working on a collection focusing on the China market. It was really dynamic and amazing, because it was just when China was blooming, and the customer was evolving so quickly. It was so exciting, the things you could do from one season to the next, and I learned a lot, being close to the factory and the sample room, just really learning the insides of a garment company. 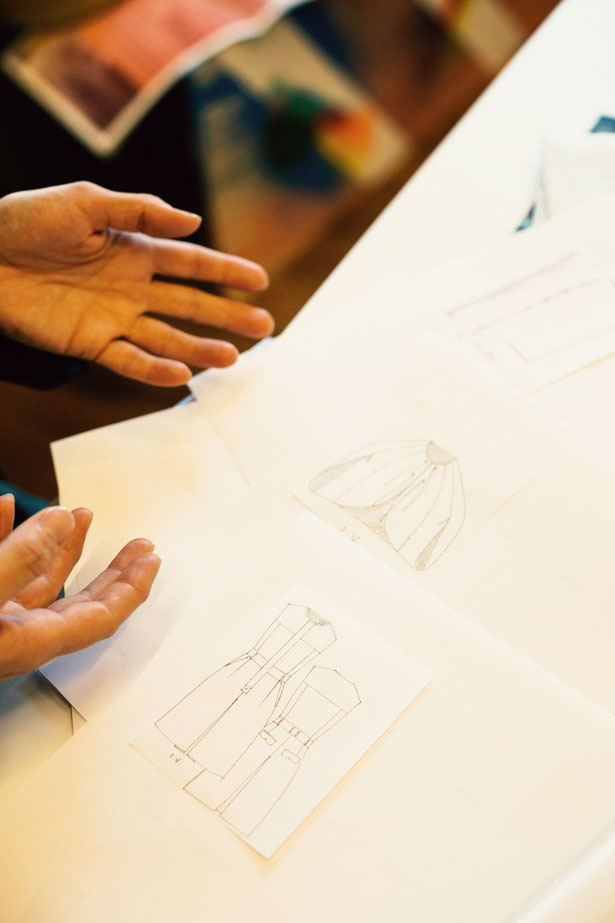 So how did you end up back in the U.S. with your own line?

After ten years with Ports, I was basically living for my job, and I thought, I want to have a family at some point, meet the right person, all that stuff. I felt like I was keeping myself in hiding in China. So I moved back. And at that time, Ports was interested in coming back to North America, so it was perfect timing – this opportunity to relaunch Ports to North America, with a brand new image, because they had been absent from the market for ten years. So it was great!

I did that for seven years – I was based out of New York, but traveling all over the world: here for fabric, and there for research, and somewhere else for a photo shoot…never in one place for more than six weeks. It was really stressful and amazing, but after seven years of doing that, I thought, Okay. I have met the right guy. If I want to have a family, I better slow down a little a bit. So I stopped my crazy travels, and now we have a toddler – she’s going to be 2 in June.

And it was when I got pregnant – my second trimester was like, Woohoo! I feel like a superhero, I can do anything! And I had missed working on womenswear. So I decided to relaunch. 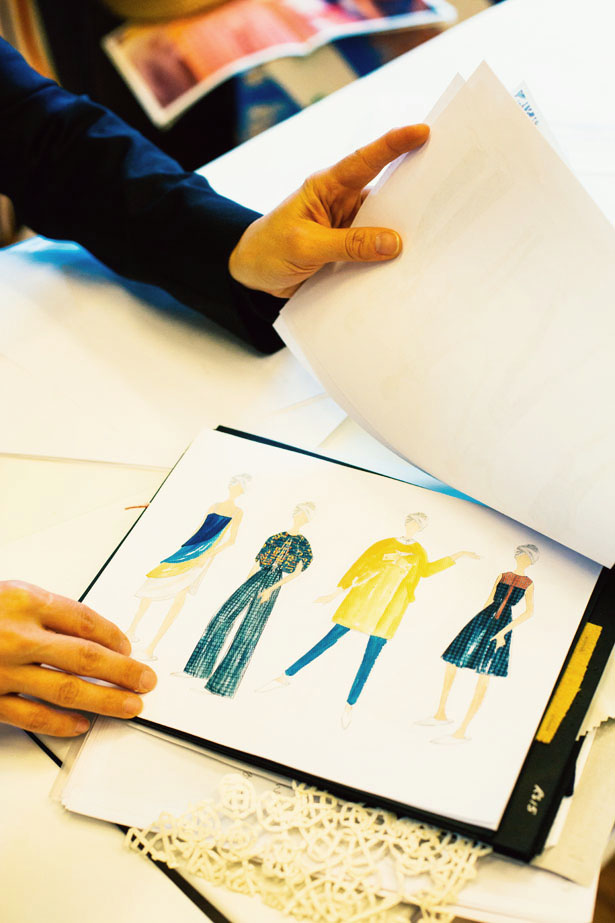 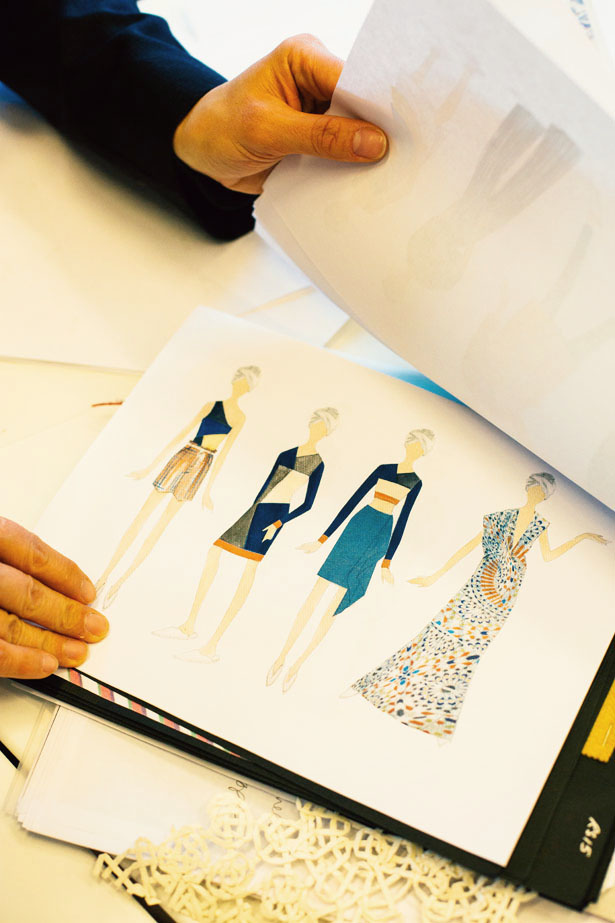 Wait, you relaunched while you were pregnant?!?

Yes! I did that while I was pregnant. Everyone was telling me I was crazy, but you know baby brain – I wasn’t thinking straight! It was real. I had two babies – the real baby and then this design baby.

In hindsight, I think it was a good thing, but it’s a lot. I did it while I was in this fog and thinking, Oh yeah, I can do it, it’s fun, I miss it, and I think if I hadn’t done it, I would have then had my baby, and been like, Oh, now I have this baby. I have to wait until she goes to preschool or kindergarten, but by then time would have really gone by and I would have settled into some other rhythm. So it’s good that I just did it. Because then they were both there and I couldn’t get away from them. 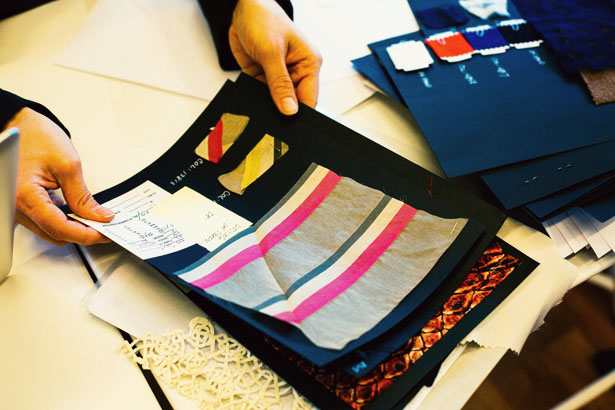 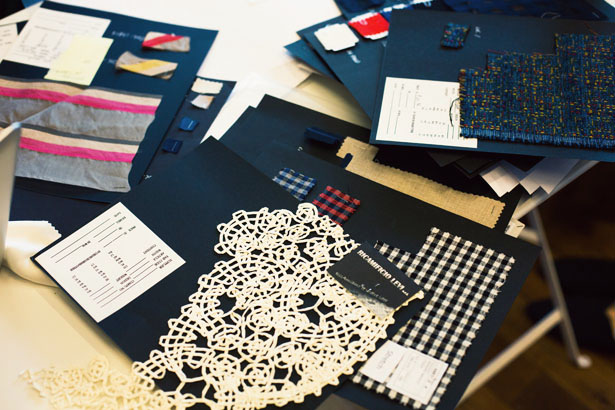 What made you decide to name the line after yourself?

I did originally think of a name that wasn’t my name…but nothing was available. The trademark was like, “Nope, sorry, taken,” or “That’s too similar to this”. So then I was like, Okay, I’ll just use my name. Then when I was working with a lawyer about the name, in the end they said, “You know what, you have a nice little history, you could maybe benefit from that, and call it your name.” So I did. It solved a lot of problems. 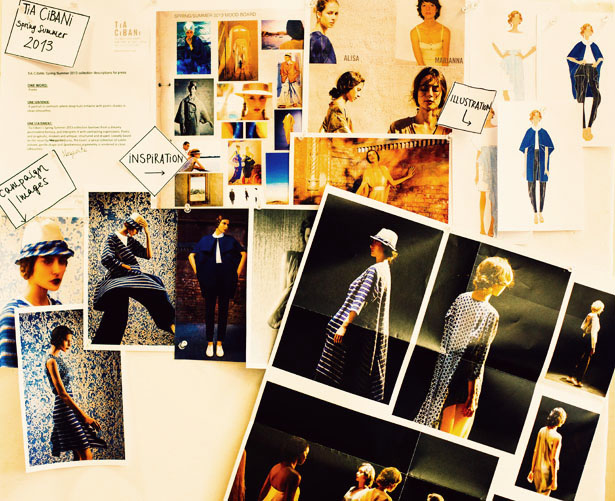 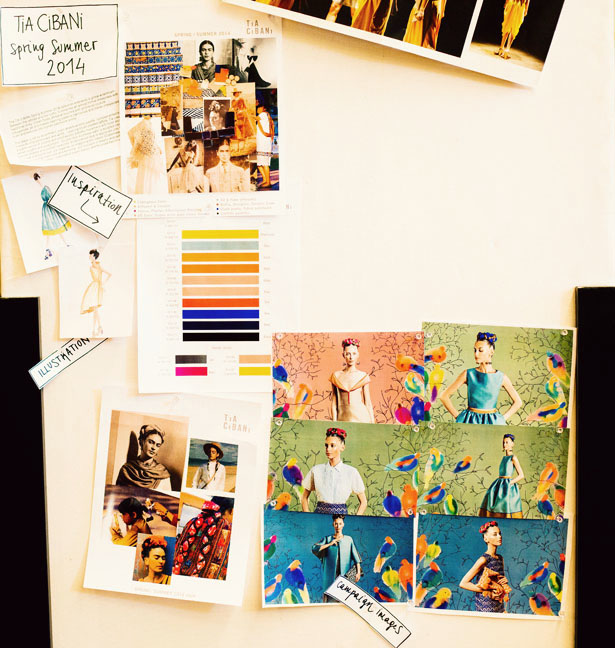 What was the inspiration behind this past season?

This season was actually inspired by fabric…it’s everything to me. I was lost in my theme – usually I have a very specific thought, I create a color palette around it, and I go look for fabrics to work with it. But this time I wasn’t feeling anything in particular and I thought, I’ll just see what jumps at me, and as I was looking at all of these fabrics, everything was jumping at me.

So I thought, Okay, maybe my girl this season loves it all, and she puts it together in such a way that it feels cohesive. I thought of the ultimate fashion magpie, and Iris Apfel is amazing. I’ve always wanted to reference her, so it made sense to pull her into the mix of what could inspire me. When I researched her story, she was committed to old-world weavers, especially weavers in the Middle East and North Africa – and that hit home. I thought of East meets West, and went to Turkey. I loved the whirling dervish, so I threw in the whirling dervish silhouette, and then it became about movement and dance. So all these easy shapes, kimono sleeves, full skirts…I had a tapestry at home that was actually from Turkey, so I pulled colors from that, pulling in the black for urban or charcoal for a neutral color that might glue everything together. And it became this. 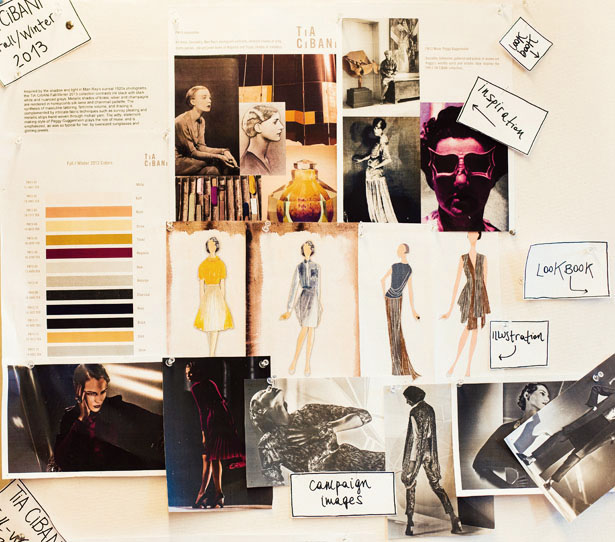 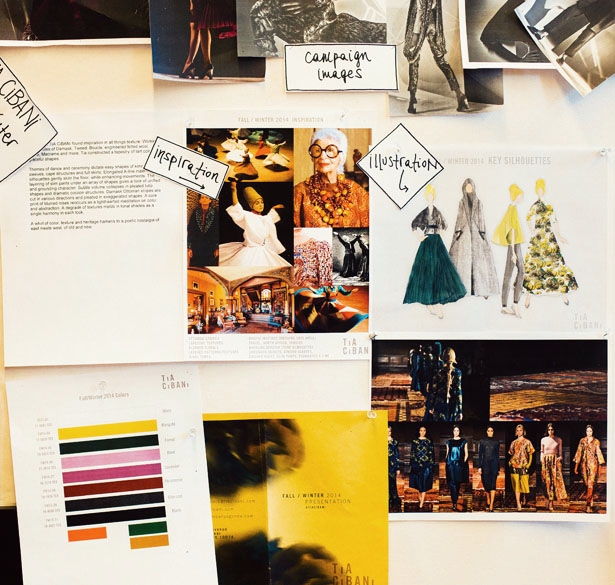 Below, Tia restyles me in her spring design show me alternative ways to tie the belt changing the look. 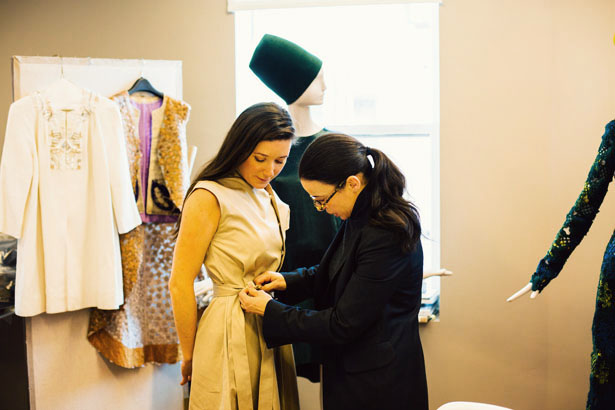 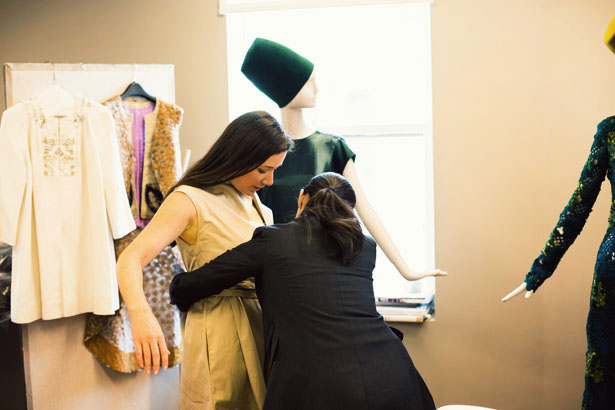 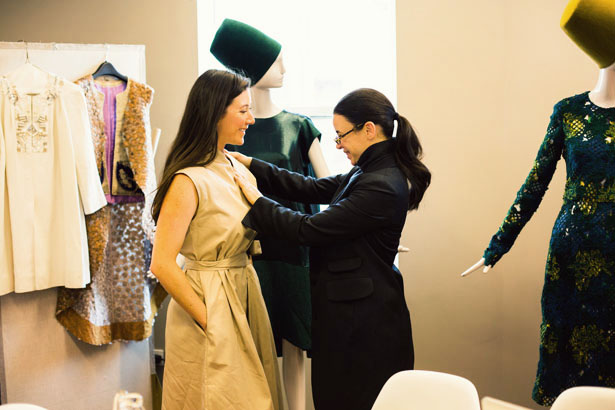 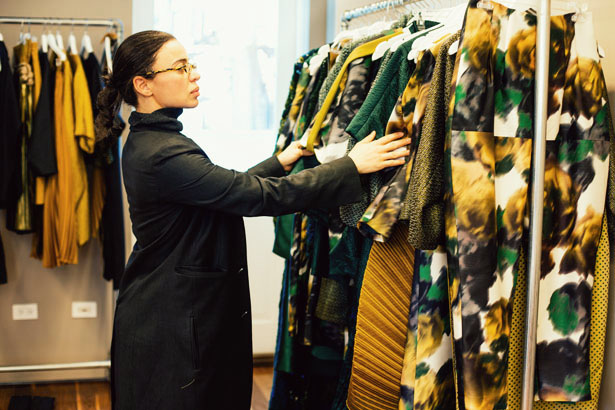 What is the most difficult part about relaunching?

I feel very comfortable with all the inner workings of putting together a collection. I feel confident in my process and I’m able to meet the deadlines with all the creative inputs that I think are important. So that’s easy. Having to relaunch something and say something different from what I was saying before was probably the challenging part for me. I was intimately involved in the Ports 1961 project, so that was a reflection of me, with a bigger team. Now I’m doing what feels right to me with a smaller team, so I think that the vision is more clear in this project to what I really believe in and feel comfortable with and confident about. 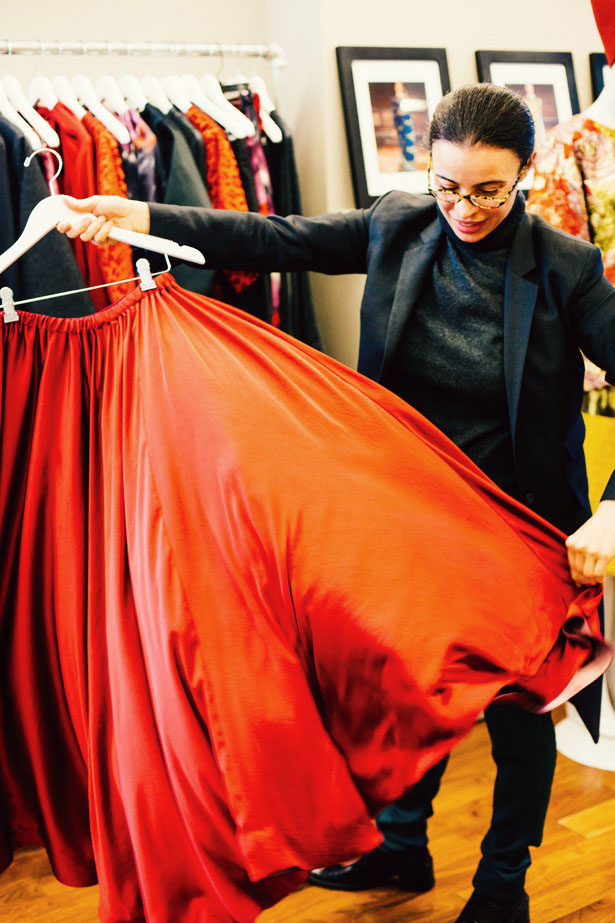 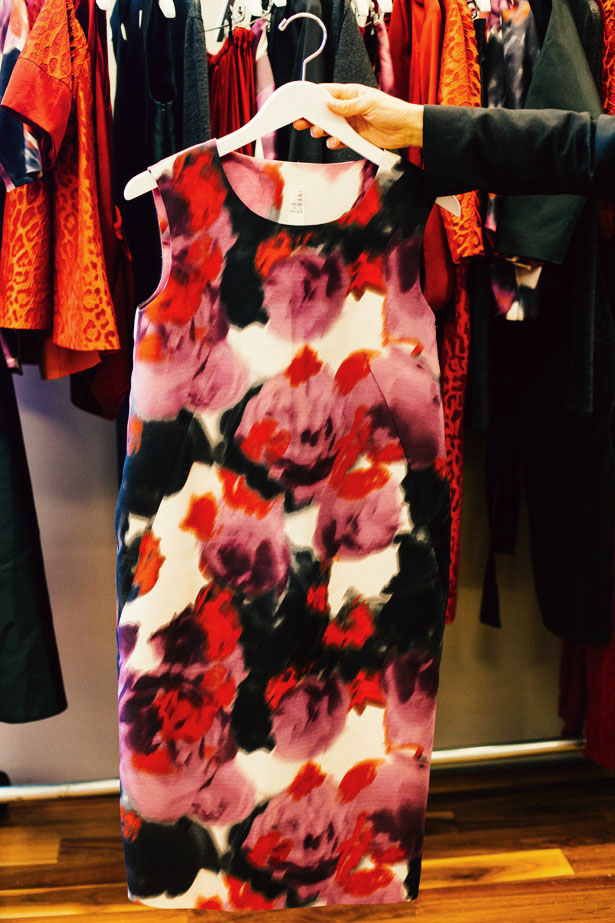 Who is the Tia Cibani woman?

I’ve always done this eclectic, global girl. I keep heading in that direction, deriving from all the sources I’ve been exposed to – my history, my background, my personal heritage, the travels I’ve done, and then what I’m doing today, the real lifestyle I have to face myself, being a mother, working in an on-the-go city.

I think she’s anywhere between 27 and 57. I really do. When I was at Ports and I was creating collections that had a diversity in them, there were two Jackies in the room. Jackie L. was 21 years old and had been the PR intern who became the PR assistant. Jacqueline W. was the president of the company, and she was a woman in her early fifties. And they were wearing the same dress from the collection, and they both looked super chic & adorable. Jackie L. had her cute little ballet flats and Jackie W. had heels and a bob – it was wearing the same dress differently, but both women rocked it out amazingly. I want my clothes to have that kind of broad range. 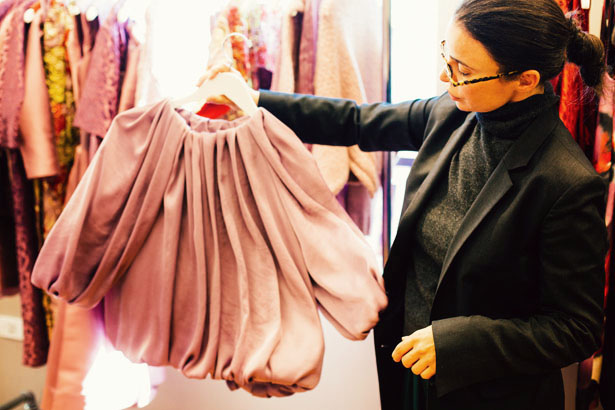 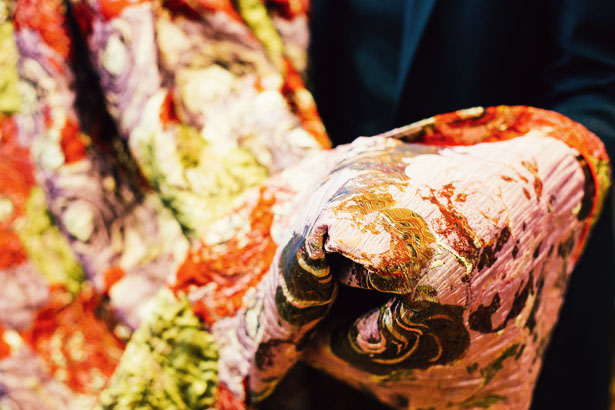 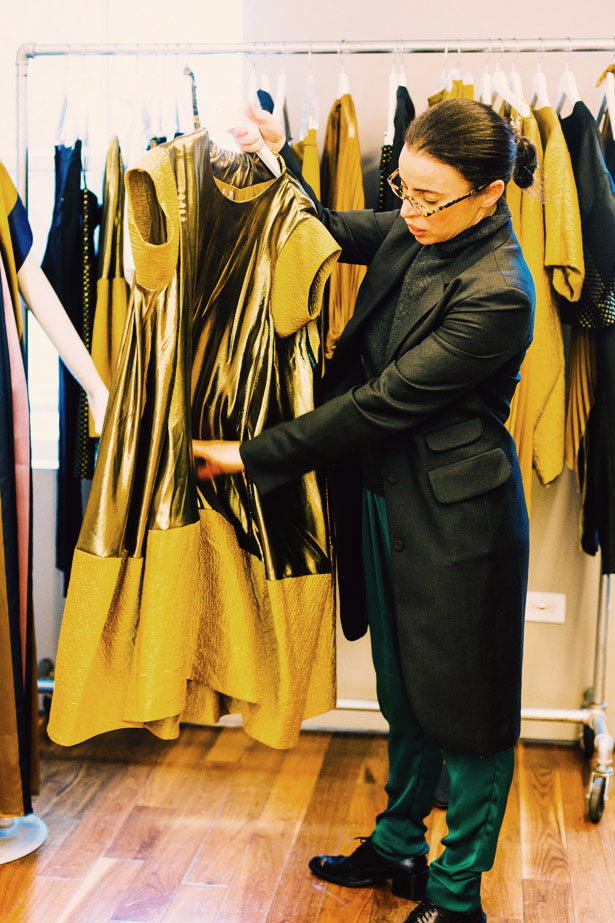 Who makes up your team?

We are all of three people. I don’t know how! We’re super crazed. We’re very ambitious. It is a small team – it’s a big challenge, but at the same time it’s really lovely. Because it’s very intimate, and we get to grow together. I do everything, and then Chelsea focuses on sales and marketing, but she’s kind of the glue in our office. She really helps to sort and organize and keep us moving. Brandon is my senior designer, and he helps me with all things creative and all things related to product development and manufacturing.

And then I have these external resources that I engage, a bookkeeper and accounting, and the factory that I work with on 38th Street. He’s also my sample maker, so I can keep it all in one place. I’m so married to him. One sample room is making every single thing that is here, and the pieces are very diverse. He’s making structured things, soft draped things, and working with all kinds of fabrications. He’s my guy. I do everything with him; he’s so capable. So he’s an important external player. 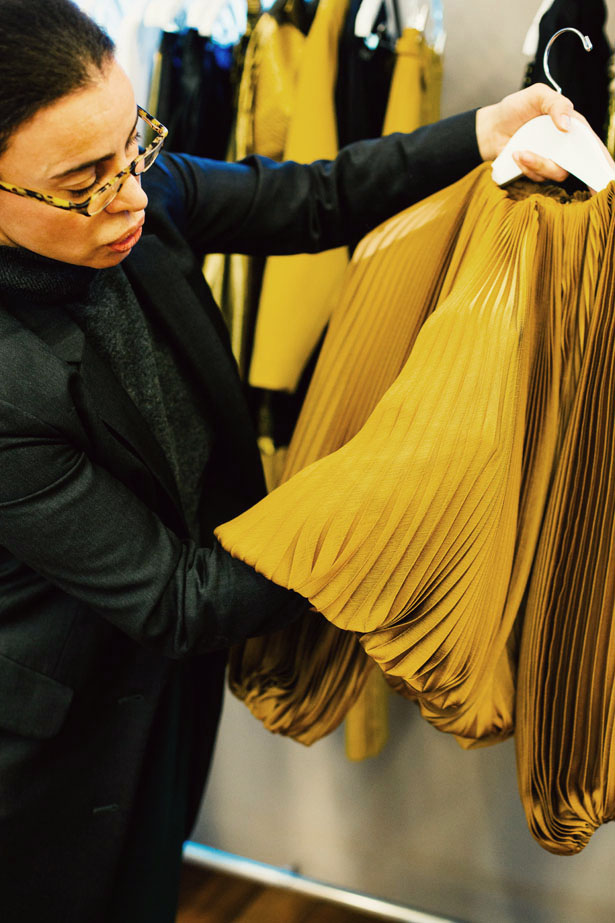 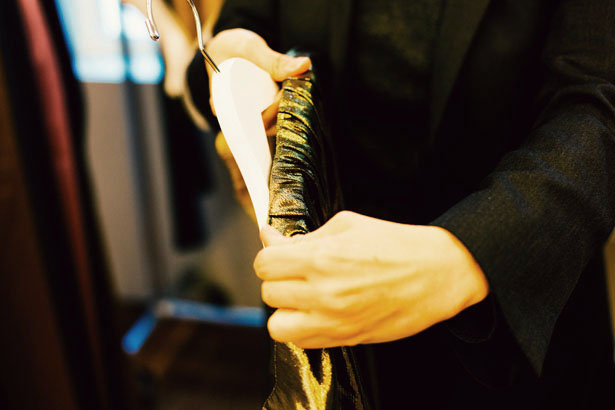 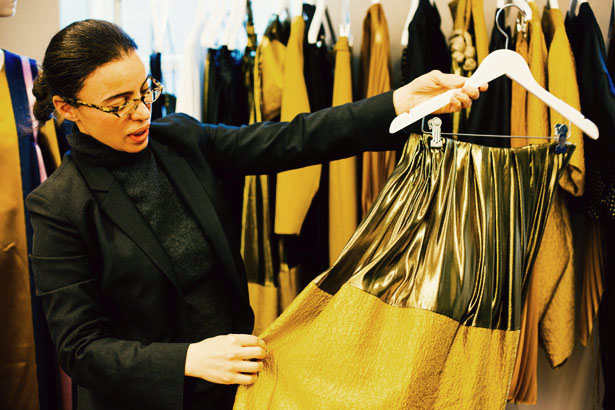 What’s the next step for you as a company?

Currently we’re sold in a handful of boutiques in America, and internationally we’re in Harvey Nichols in Hong Kong. So it’s the beginning.

I definitely want to grow my distribution. I like the idea of small boutiques, especially in the beginning. I need to build my infrastructure before I tackle delivering to the department stores and all of their very different demands. I wouldn’t mind having my own boutique at some point, which is a nice way to express my full point of view. But for now, just growing the business globally and really focusing on these intimate, small boutique locales. 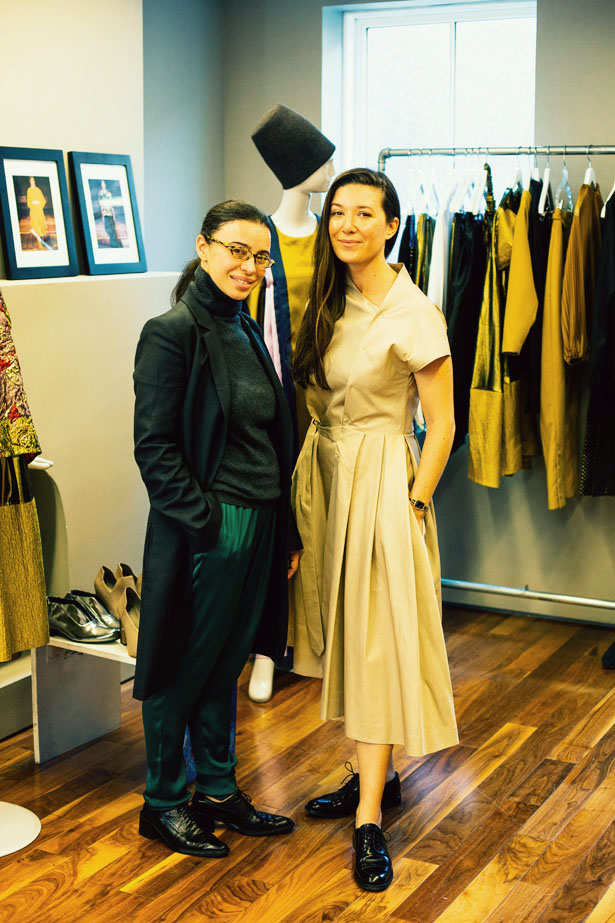 My FAV studio tours from the archives:

One thought on “Tia Cibani”