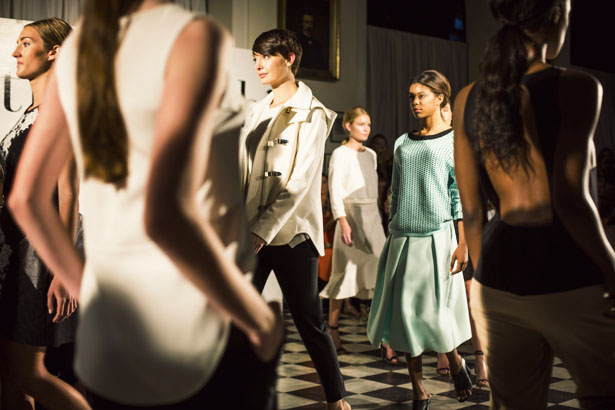 When I got the invitation to Tibi‘s pre-fall fashion show in Charleston’s historic Library Society Hall hosted by Hampden Clothing Store (more on that little gem tomorrow), I RSVP’d right away. Two of my loves coming together – fashion and the South!

I was first introduced to the fashion brand Tibi last year and lived in her pieces all of fall. Tibi is a brand that doesn’t take fashion too seriously, but instead allows you to play in interesting ways…the kind of way that makes people notice something special about you even though you’re still the girl next door…. even if you’re twirling around in RIO (!!!)

Down in Charleston I was able to meet the creator of Tibi, designer Amy Smilovic (who was born on St. Simons Island!) and ask her where it all came from, how it went from selling pieces out of suitcase to the runways of New York and now back home for the women who have seen you through it all… 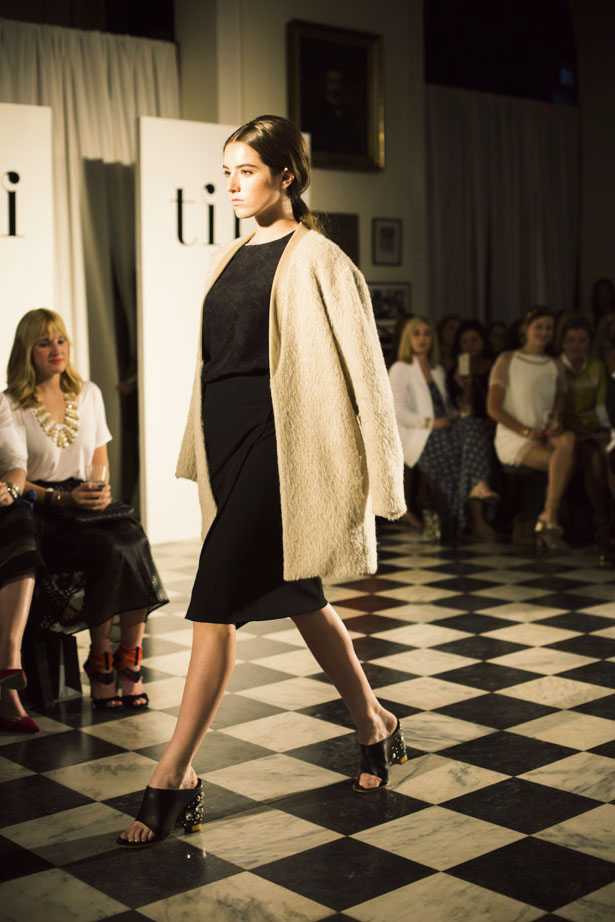 So first, what’s the connection between Tibi and Charleston?
“The first connection is that Stacy just has an amazing boutique. I don’t think her boutique defines Charleston, I think it would be a great boutique anywhere. But we do have a big southern following and I’m sure that’s because it’s where I’m from, St. Simons Island, Georgia.” 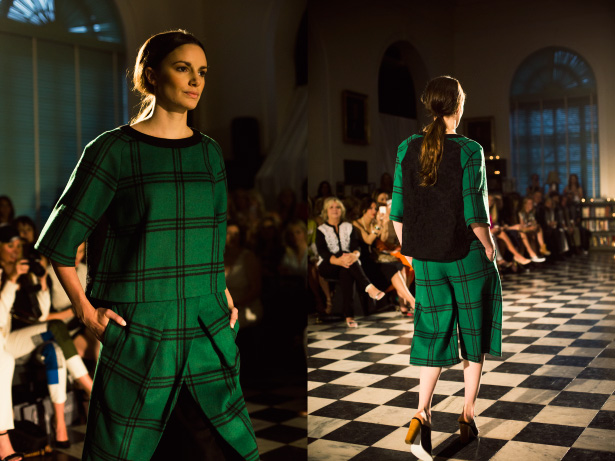 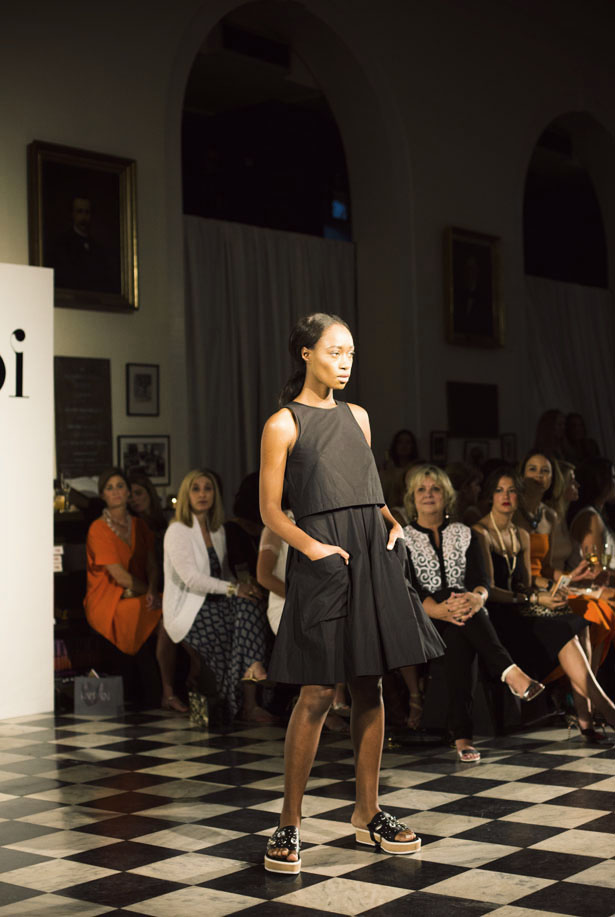 What does Charleston mean to you?
“All weekend we’ve been talking about things that are real and authentic, and this town is the real deal, you know? There’s so much authenticity here between the homes and the streets and the communal feel and the shopping. It’s really a thriving real town, which is so great to see especially when so many towns are struggling.” 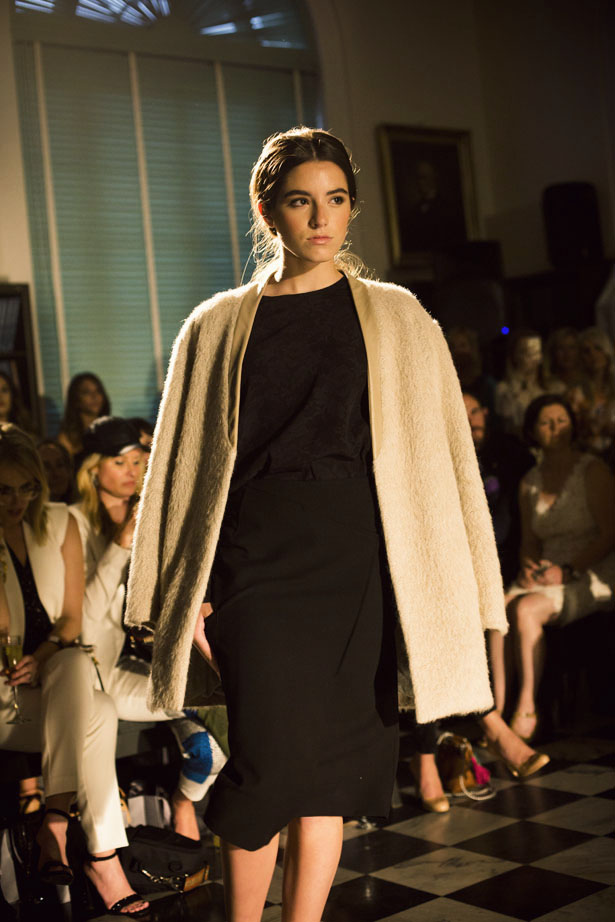 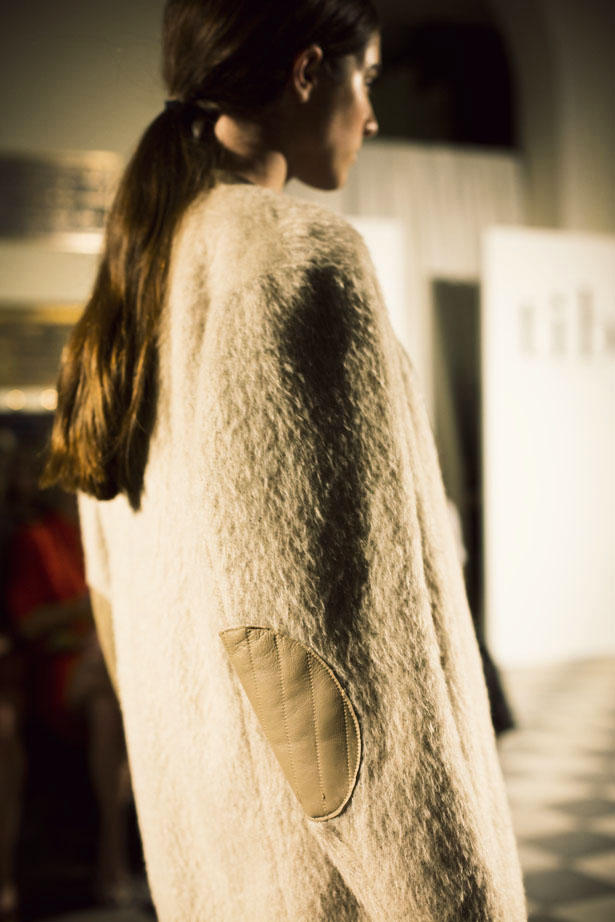 So let’s talk about the show here, pre-fall. What was your inspiration?
“Pre-fall was – for these in-between seasons, we like to be a little more lighthearted. You don’t want to take yourself so seriously in those seasons. Fall is where your meat and potatoes are, and pre-fall is like an appetizer. So we actually started with the Brawny Man…and lumberjacks, which lead to forests and squirrels, and log cabins, so it started in that kind of fun place, and then you interpret that into things that are clean and sophisticated. The thing about Tibi is that it should have a bit of lightness to it. I don’t ever like to take myself too seriously. It’s so hard at Fashion Week when the Italian editors come backstage, because they’re like, “Tell us your inspiration.” And I’m like, “Ohh, well…the Brawny man?” “ 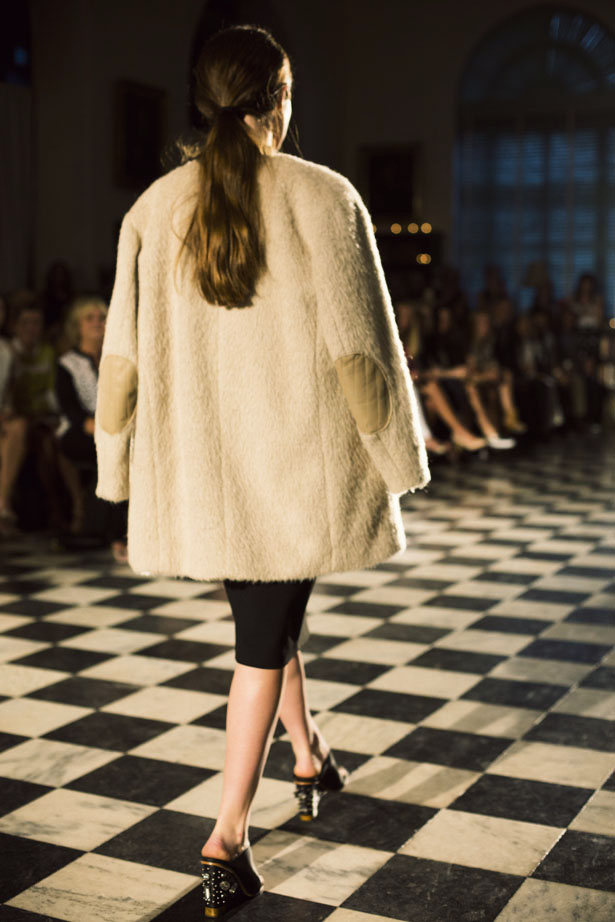 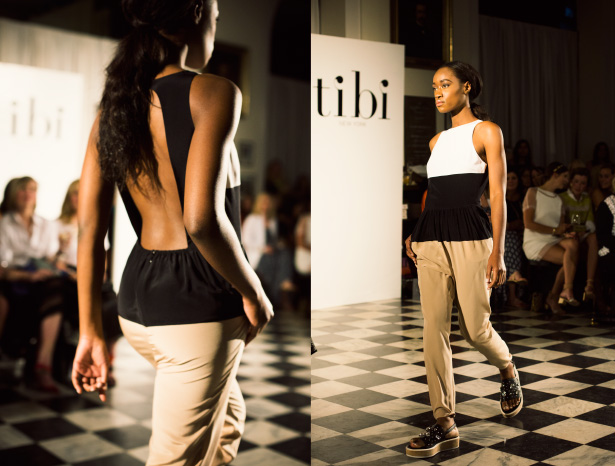 Where did the name Tibi come from?
“It was my friend’s grandmother’s name. I started the business with her, she moved on after a year, and my grandparents were Betty and Bernice. So Tibi won. Bernice was so pissed. She died a few years ago and she went to the grave angry that this Tibi grandmother won out.” 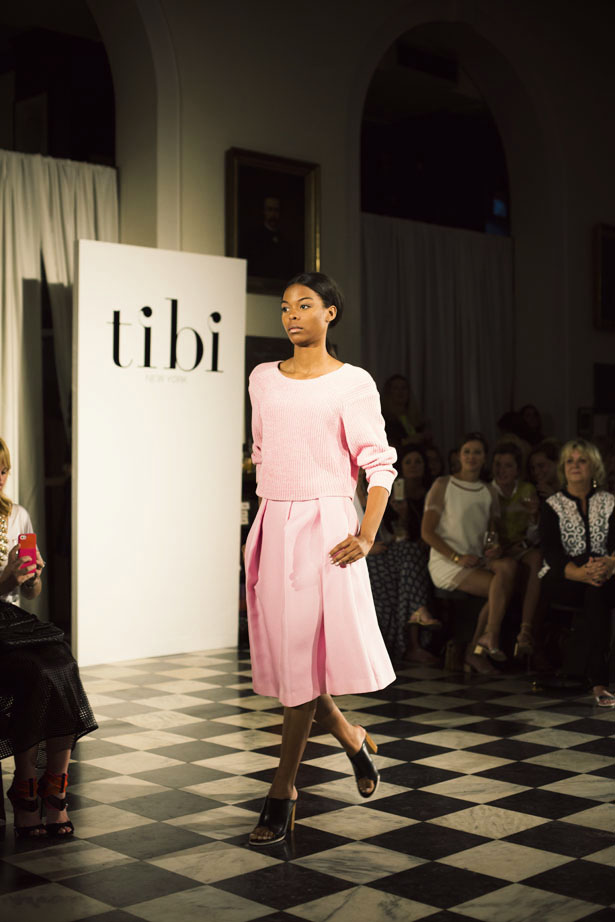 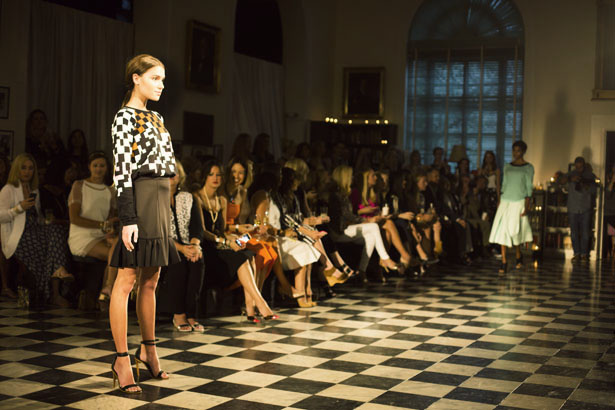 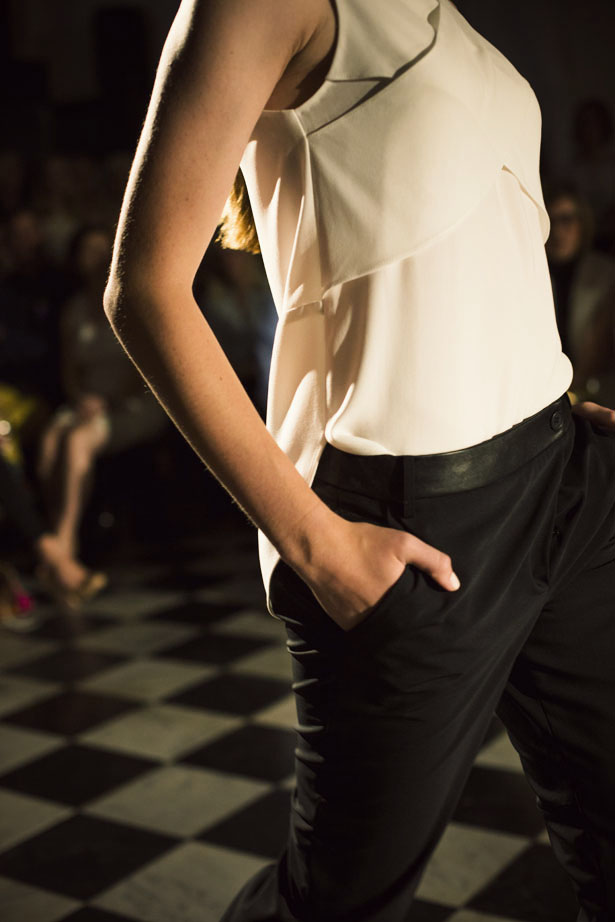 How long ago did you start the line?
“Seventeen years ago. I was living in Hong Kong, and I started it in 1997.”

Why did you start a fashion line? What was the idea?
“I wanted my own business, I had an art and business background and I wanted to use that, and I wanted to leverage what was available in Asia. From a business perspective, clothing made sense. I could draw, I knew business, I knew marketing, and I’m in China. So that’s where it started.” 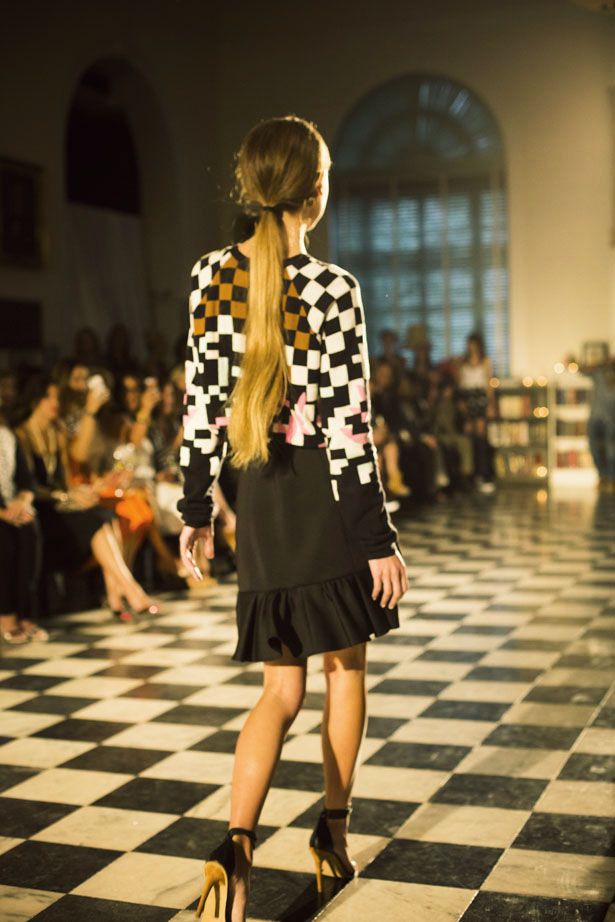 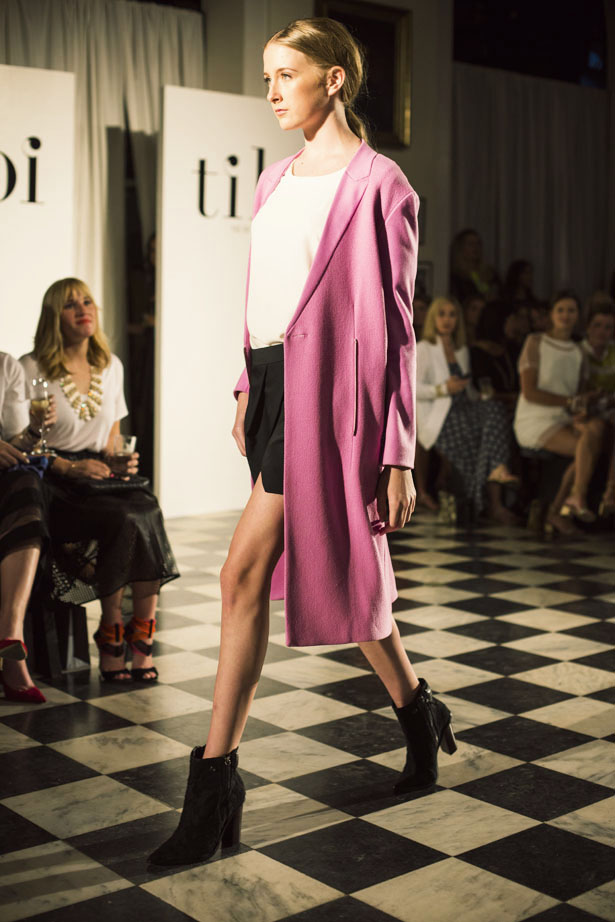 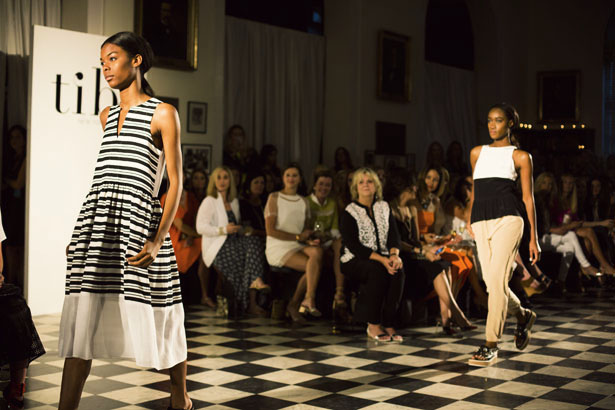 So when you had your first collection – did you go to stores? Were you selling them yourself? Because this was pre-Internet…
“Pre-Internet, yes. In my speech the other day, I gave this as my business plan: a business guy in Hong Kong told me, “If you make a product and it sells, you have a business. And if you make a product and it doesn’t sell, you do not have a business.” And I was like, all right. So we designed two dresses, a skirt and a pair of pants, and I made 400 of each, so I had 1600 items. And we sold them out of my apartment. I sold $10k worth and I paid $12k for my entire inventory. So I had 400 units left over and had almost broken even at that point. Each time I made money, I put it in the bank and put it towards the next production run, and it grew that way.” 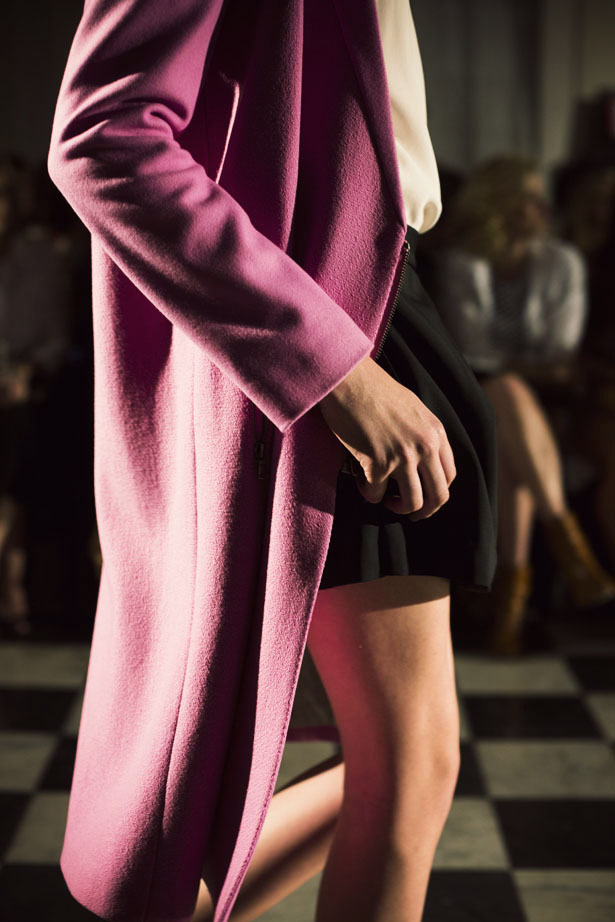 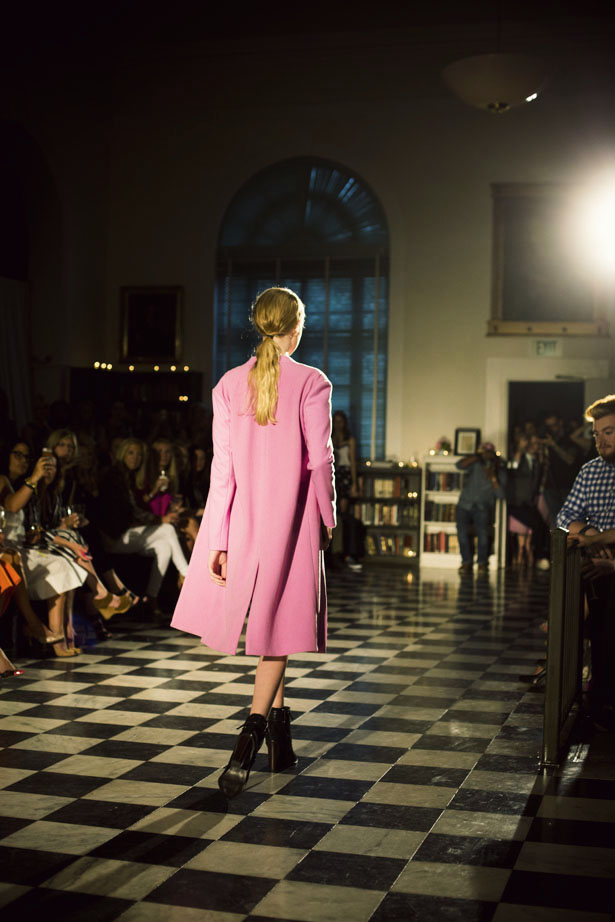 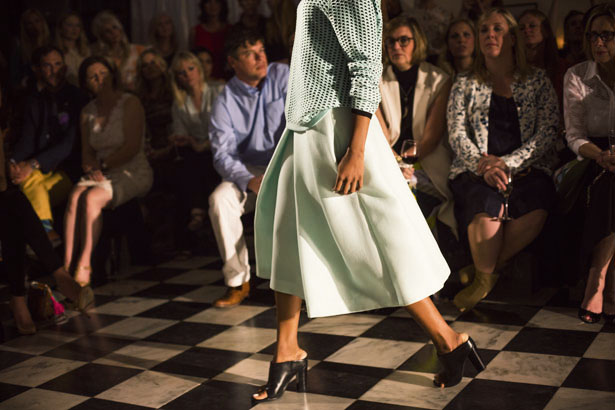 How many employees do you have now?
“Seventy in the US.”

And you’re headquartered in NYC?
“Yes, we have two offices in New York right next to each other in SoHo. And then I have all my distribution warehousing and back offices out of Georgia.” 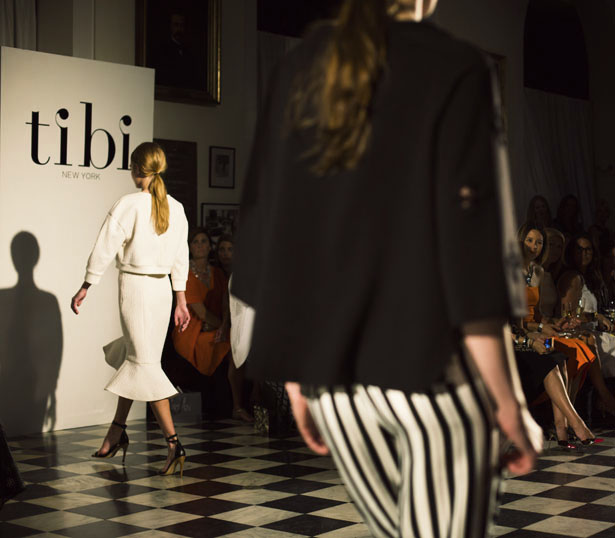 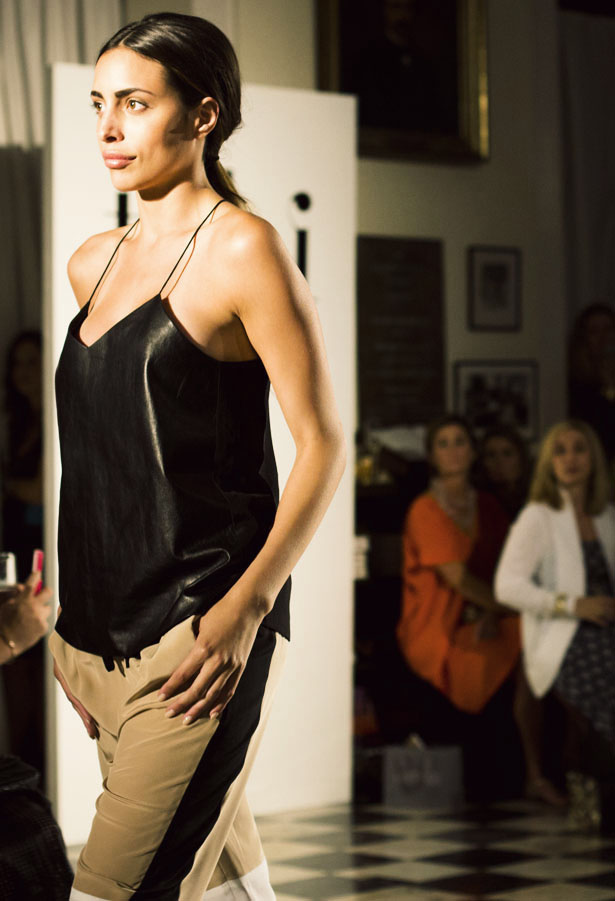 Did you have one of those “aha!” moments when, as a designer, it all became real?
“Yes, there were two turning point moments. One was at the Coterie show in New York, Jeannine Braden from Fred Segal came by and she said, “I love these skirts,” – because I started doing these little bias-cut skirts, it was when Matthew Williamson, like, late 90s, early Kate Moss, so it was this whole bias-cut skirt moment – and she said, “If you did them in crazy prints, I would buy tons from you.”

So I was staying in New York – because I was living in Hong Kong – so I was on Bleecker Street and there was this vintage store, and they had these postcard scarves. And I thought, You know, those are so tacky that it could work, in a cool way. So I bought five of them and took them back to Hong Kong and we made them into prints. And I did this series of postcard scarves. And then I had these other crazy tacky, weird knockoffs of a Versace scarf, and one of an Hermes scarf. And we made up these scarf skirts.

I went back to New York and I was wearing them around Soho, and everywhere I went, people were like, “Oh my god, where did you get that?” And I was like,” You know what, I’ve had so many compliments, I’m going to go up to Scoop and I’m going to wander around there until someone compliments me.” And I was in there for about 30 minutes when finally a salesgirl came up to me and said, “We just have to ask you, where did you get your skirt?” And I was like, “Oh. Jeannine Braden at Fred Segal, we’re kind of working together on these.” And she was like, “Let me go get Stephanie [Greenfield, who had started Scoop].” And Stephanie came out and she was like, “Oh my god, I love those skirts.” So she bought them, and then I hired a PR agency, and the PR agency got them out to every editor and on my next visit back to New York, I opened up the New York Times, and Bill Cunningham had an entire page – he didn’t realize it was one designer – and it was all the scarf skirts.

And it was the week of the Coterie, and my friend was in town, and I had said, “We don’t have to get up early for the Coterie, these shows are kind of dead.” This was about one year into my business. And we get to the Coterie, and it’s like, What’s happened? Did something happen? And it was my booth. It was so packed…it was so exciting. We did $300k at that show.” 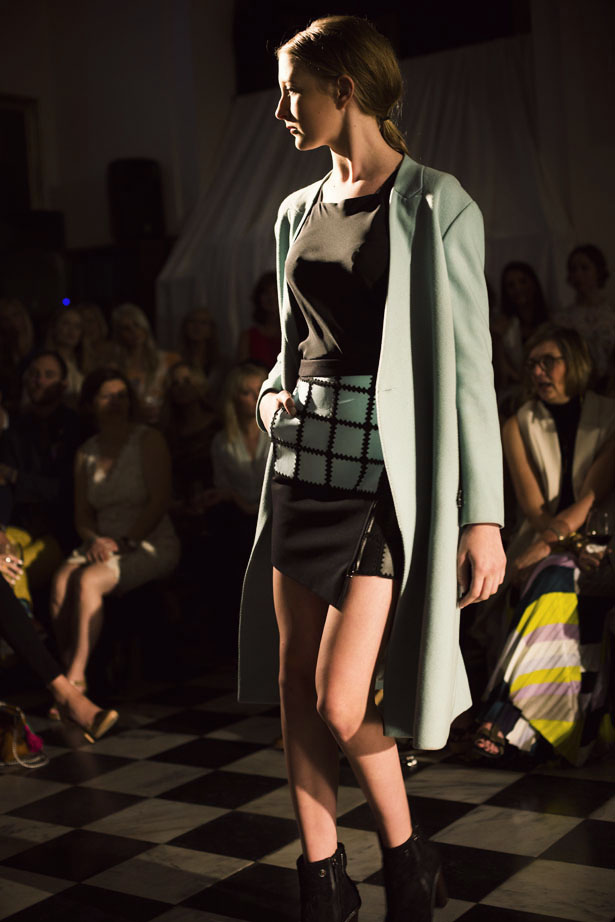 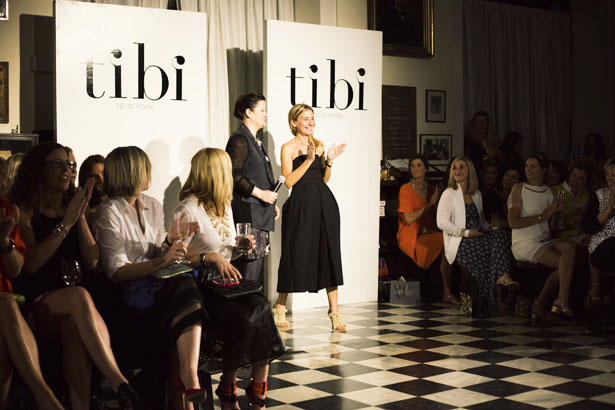 *Above, the designer after the show with Charleston’s Hampden Clothing boutique owner Stacy Smallwood // Below the southern atmosphere of the night* 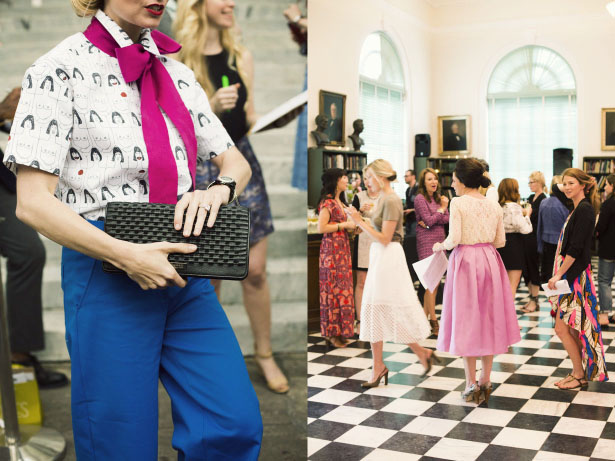 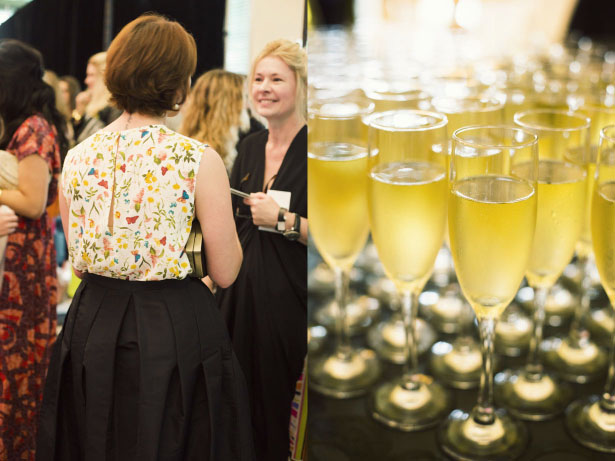 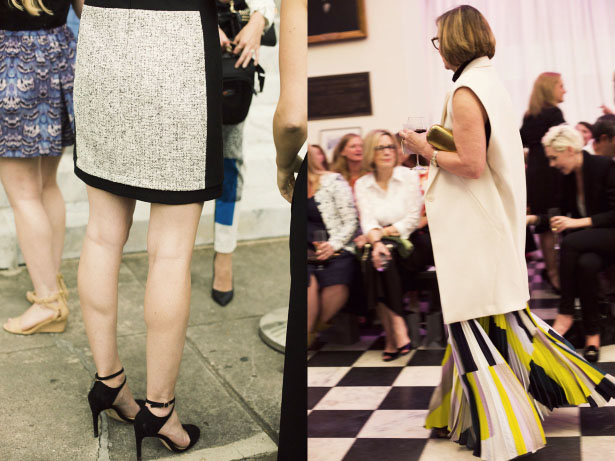 What do you want to come from Tibi?
“I just want to keep plowing forward. I mean, I would love for it to stay like it is, but you can’t just cap it. It’s like a shark – if it stops swimming, it dies. So you have to keep growing, but I want it to stay very authentic.” 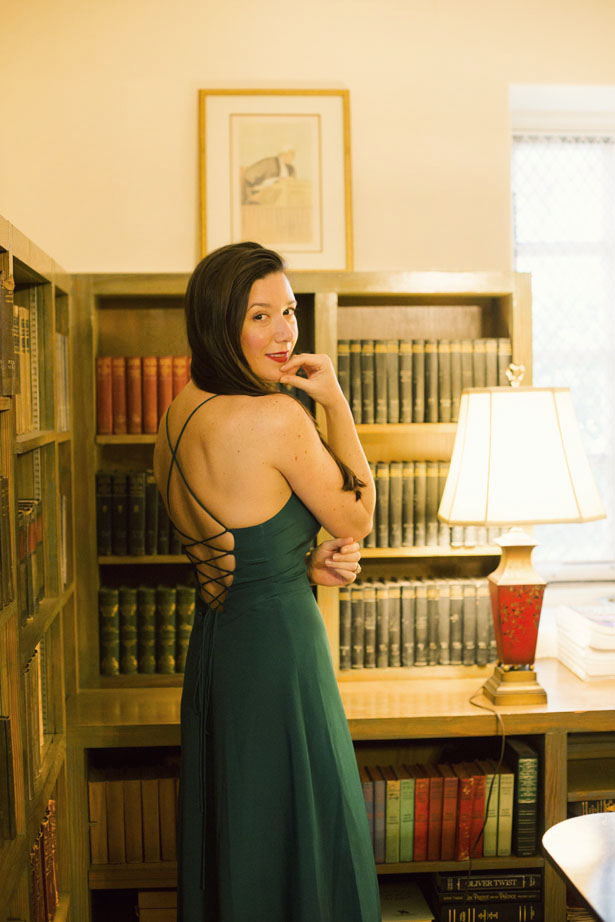 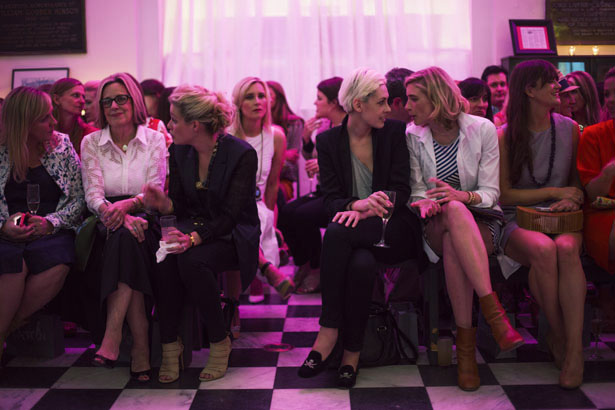 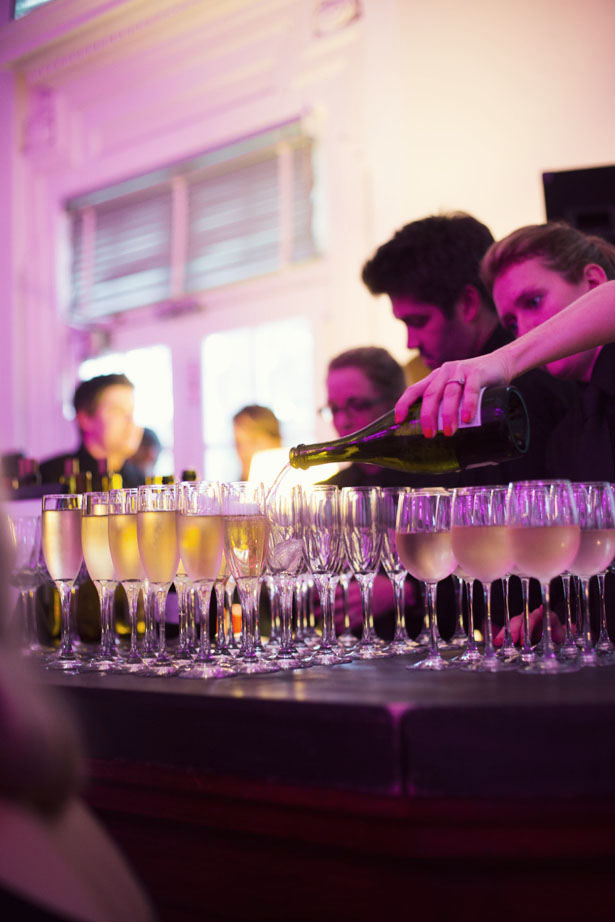 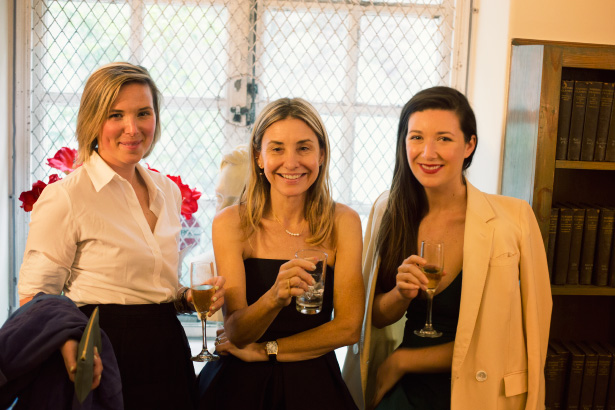 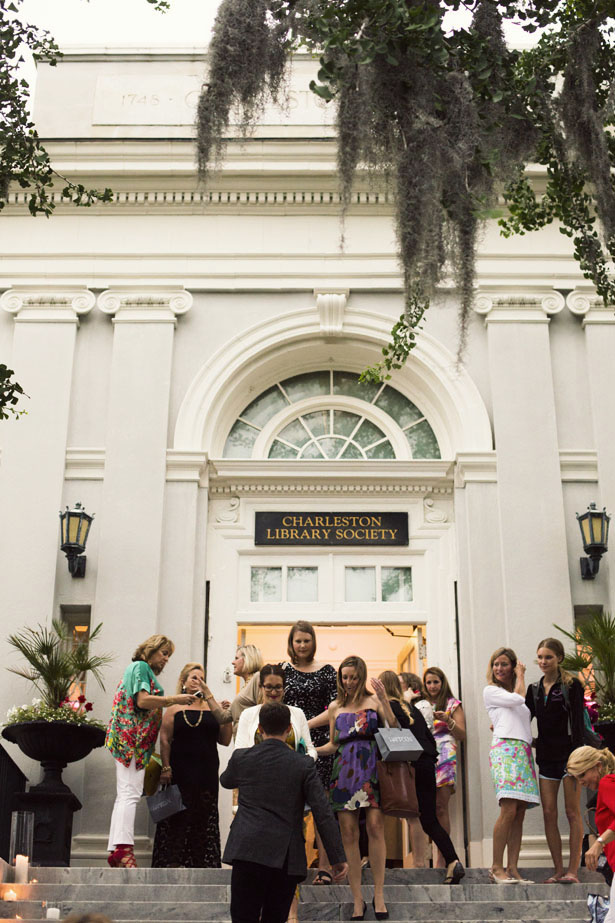