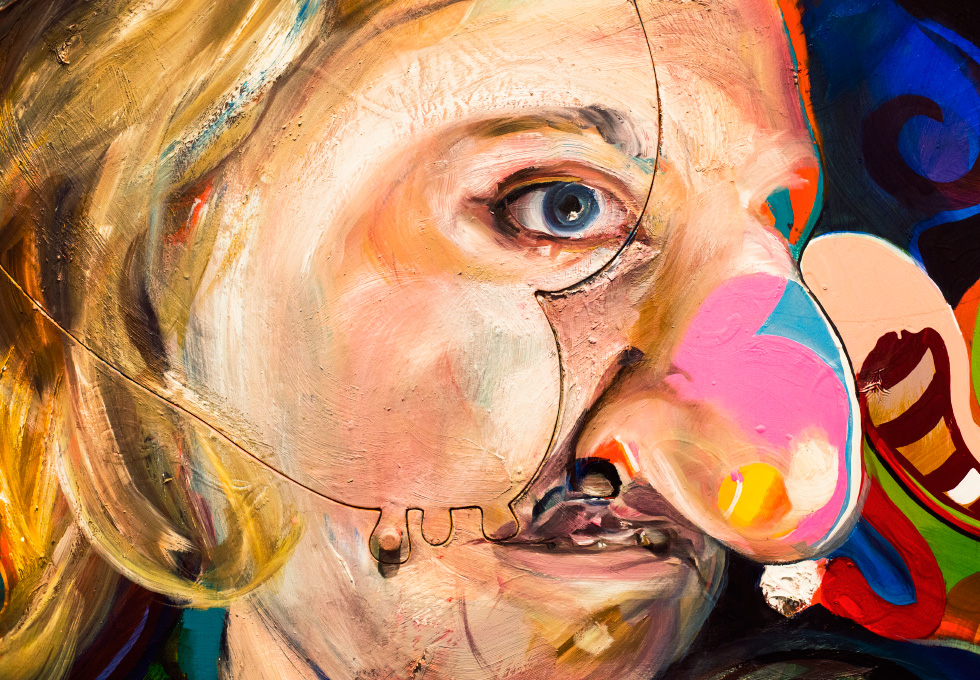 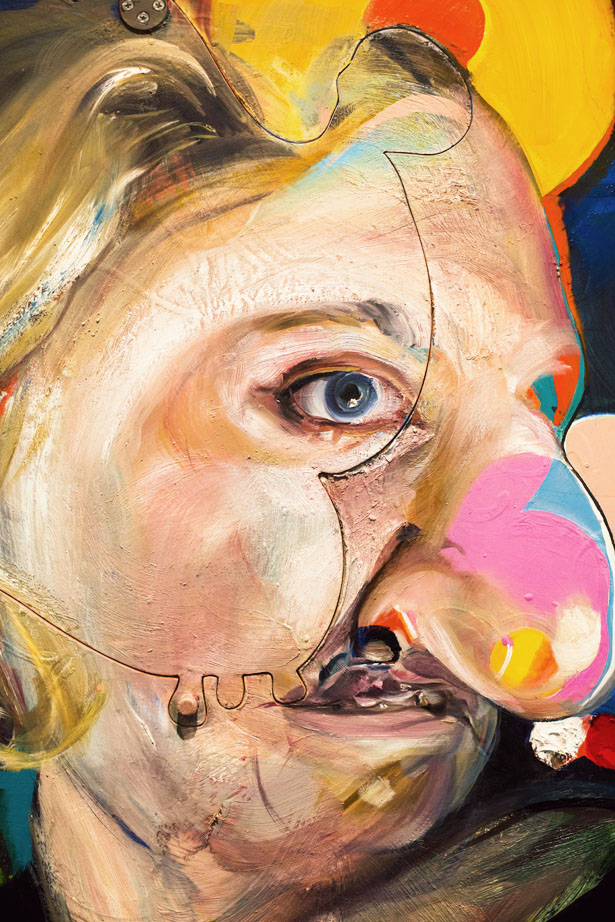 I truly love this series of studio tours we have been able to take with our friend and consultant, Maria Brito. It’s fascinating to walk into the world of another artist and, for a brief moment, see their lives, their ideas, and their passions poured out into their creations. Nowhere did we see this more than with our latest artist, Natalie Frank.

Influenced by magical realism books, the eccentric characters of her childhood, and her own fascinating imagination, Natalie creates pieces that are both striking and unsettling – images that have you waiting with bated breath for what happens next. We were able to sit down with her in her gorgeous, light-filled Bushwick studio and get a little peek to see what’s behind all these works of art… 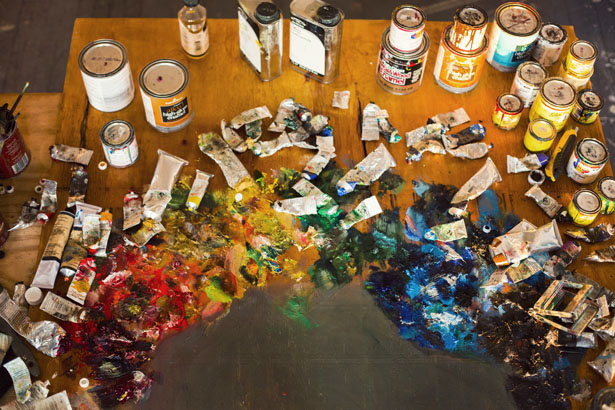 What materials do you typically work with for your pieces?

I’m working with oil and oil enamel both, which is kind of new for me – the oil enamel – I’ve kind of been traditionally an oil painter on canvas, working from life, so all of this work is a big change. Moving into the 3D and the different materials. But I have some remnants of, I guess, my traditional training, one of which is working on wood. 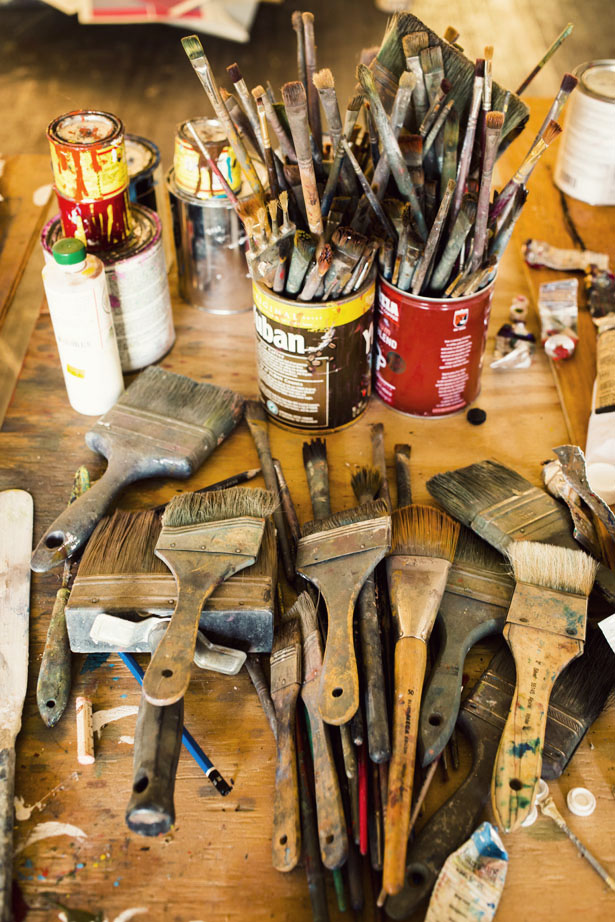 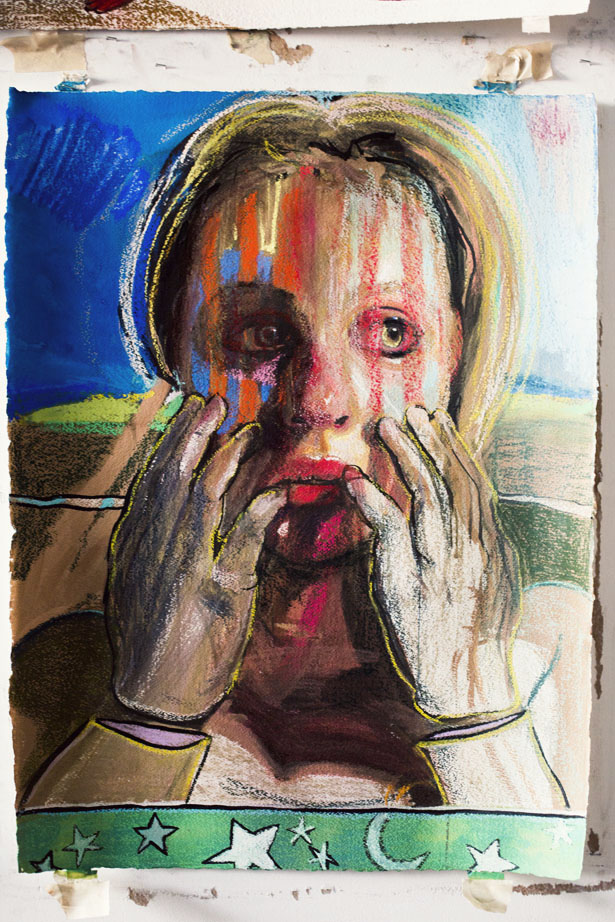 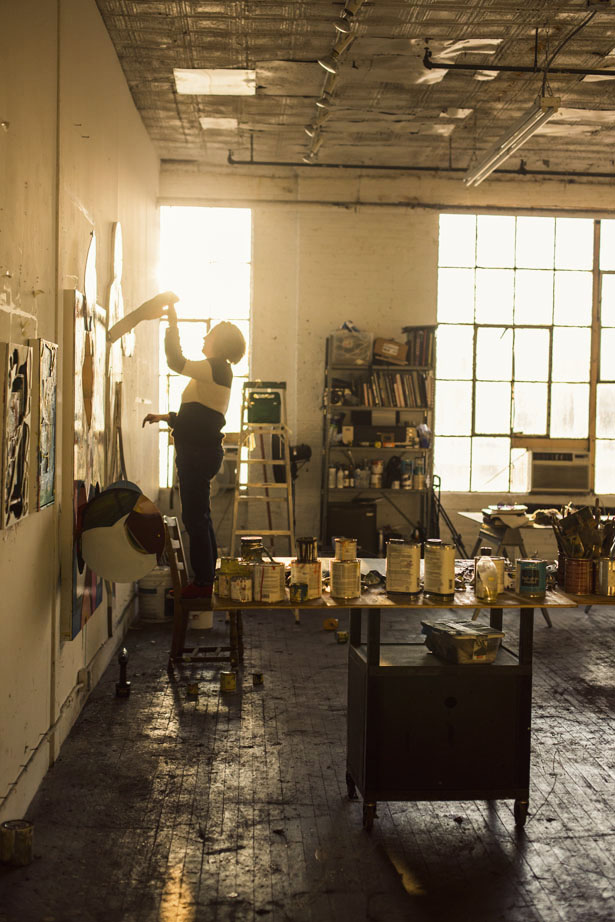 These new wood pieces you’re working on…how are they made?

It’s a panel, and I’ve been working with a fabricator who built it out and built these containers, which from the back are actually jutting out. So this is a thin panel, and then I prime everything with gesso and then oil primer. And then I’m using oil enamel, so the really shiny areas? And then oil. So this will be like, oil enamel with a thin coat of oil over it. So I like the juxtaposition of these really shiny, really rendered, and kind of mixing the two, but also this idea that figures can become other figures when you open them up. And the same with this that I’ve just started – this, almost like a marionette, and this will be for the show with Rhona in September. 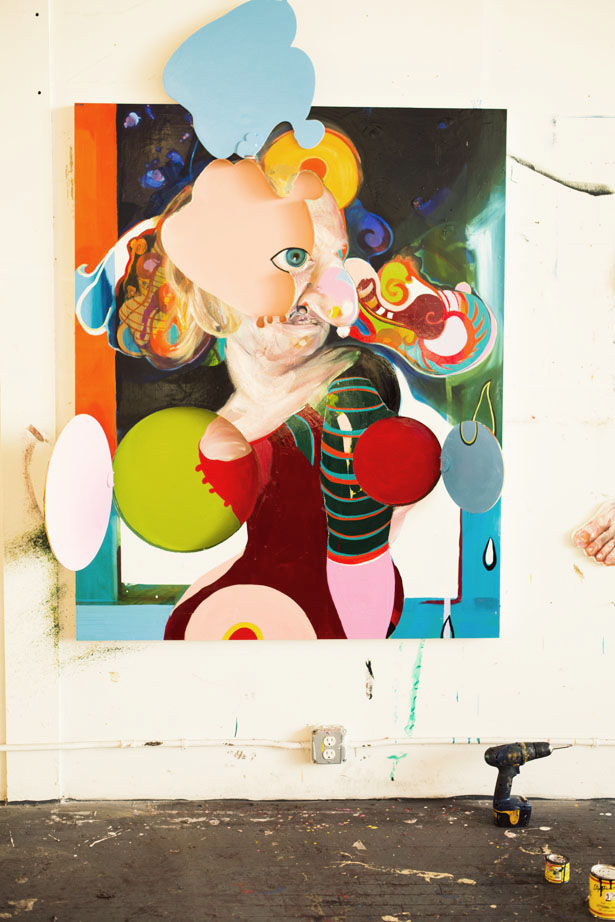 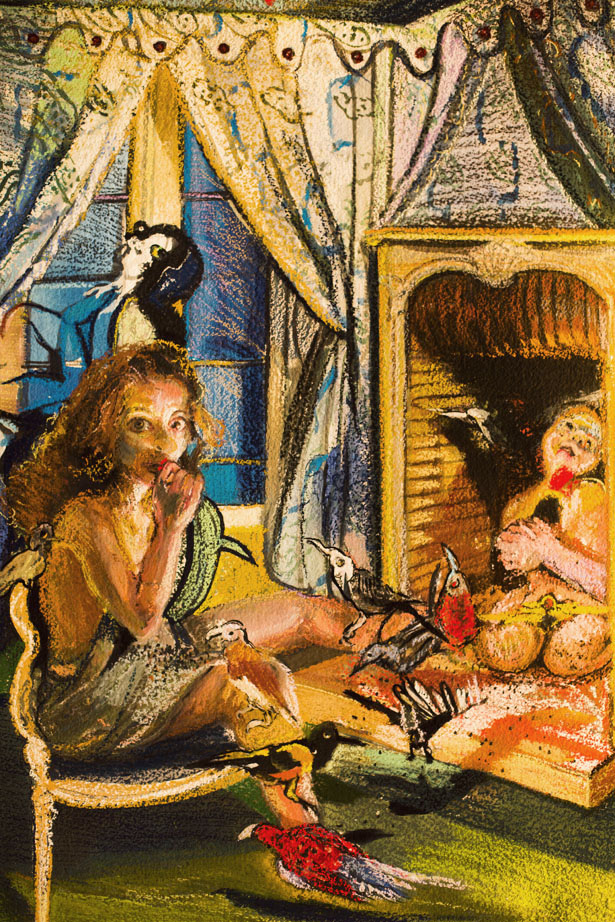 Your work contains a lot of rendered figures and abstract figures…why combine them?

I knew from the beginning, for me, that art was about telling stories, and it was always about the figure and my idea of the figure has changed dramatically from when I began. 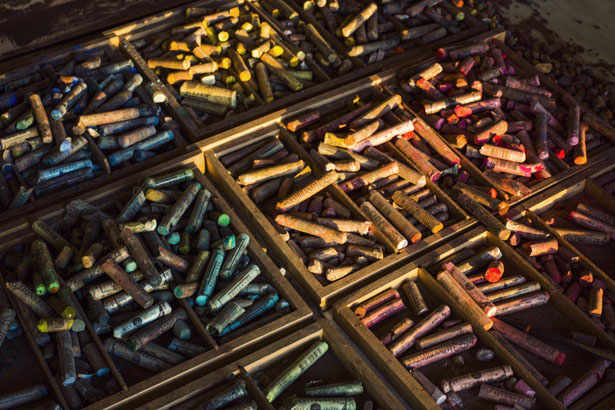 But you’ve gotten in trouble for your figures before…

Yeah, they tried to kick me out of school for being a pornographer. Because I started doing nude figure drawing when I was twelve, and my mom had to go with me to this hippie woman’s garage. I would bring my mom – who worked as a sex-change nurse, so not the usual Dallas-ite – but she would take me to this garage with these women, and then I would take the drawings back to my high school and pin them up and talk to my art teacher about them. The director of the school took me aside and said, “Here’s the thing. We can’t allow young children to see these” – they were traditional figure drawings! – “So here’s the compromise. You can do nude women, and nude self-portraits” – which I wasn’t even doing! Nice of him to suggest that… – “but no nude men.” 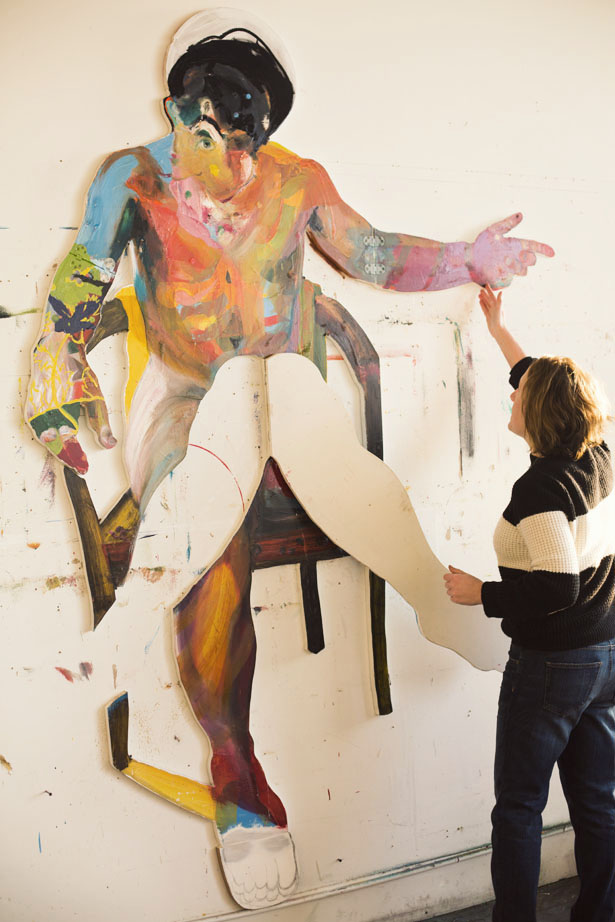 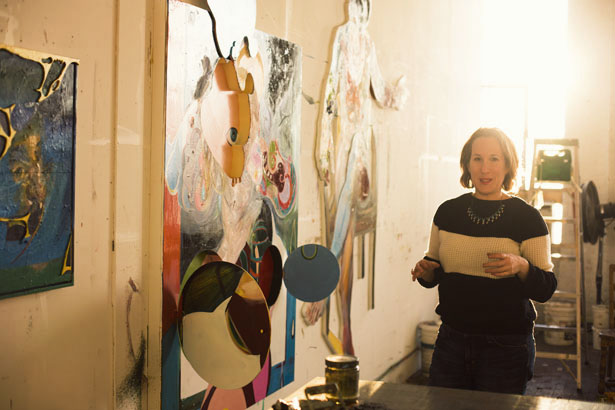 Which artists inspire you?

Chris Ofili and Mike Kelley and Robert Gober, the people who have a creepy edge with a bit of banality to it. That’s what I really respond to. But also the combination of something that’s incredibly graphic but also rendered. So it feels real but you’re always jarred back into the artificiality of the image. 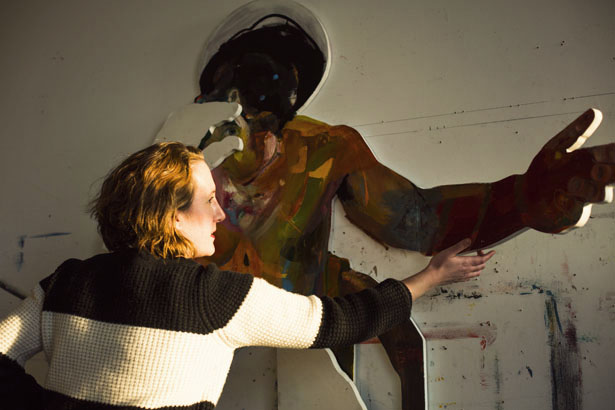 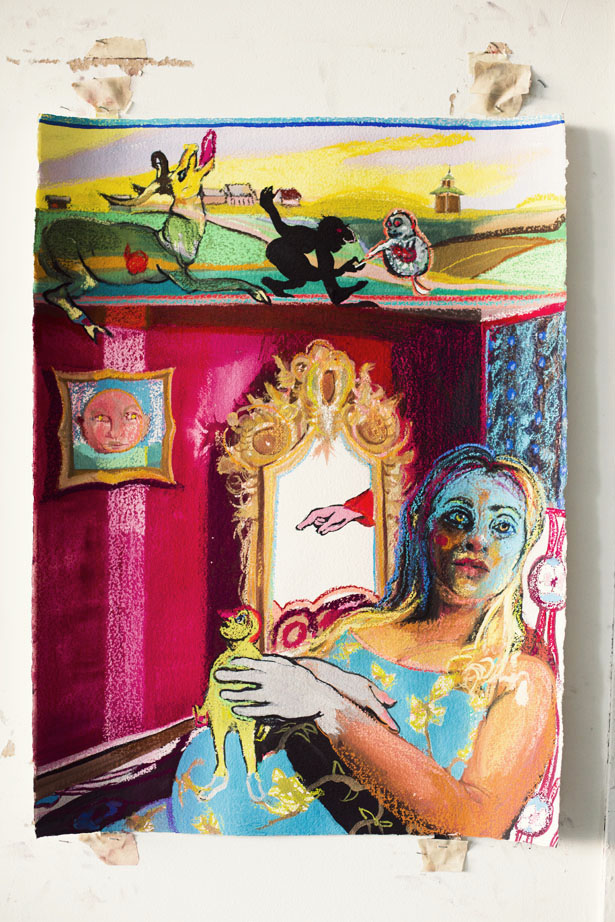 I started showing at one of the biggest galleries when I was 25, and they very much pressured me to make rendered work, and it came to a point where I knew I needed to change the work, and there wasn’t going to be the space to do that at that gallery. And so I was 28 and I had to walk away and be without a gallery and just develop my work. And for me there was never a choice, it’s always about the work. Even now to think two years ago, a year ago, I had a show of oil paintings on canvas. I can’t imagine making an oil painting on canvas now.  I always like working on panel. Panel is so different, the surface is so different…it’s better for the painting. And I’m excited to move into the 3D. My ideal would be to do an entire environment with things that move…like a Kienholz installation. That would be the ideal. 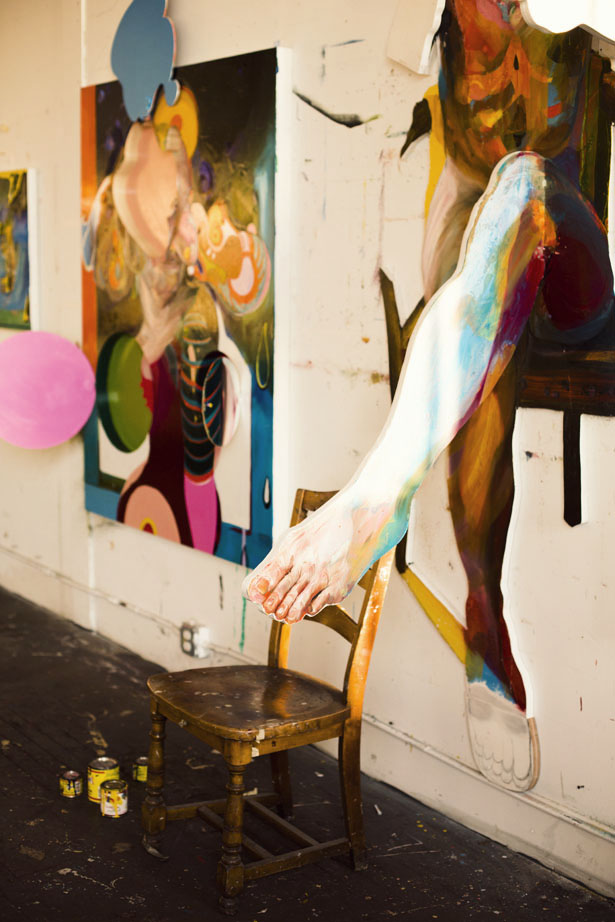 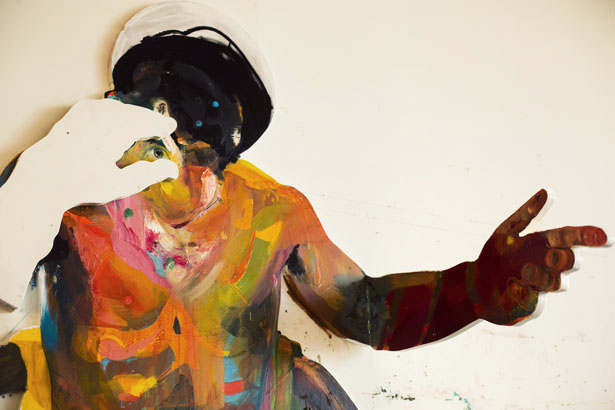 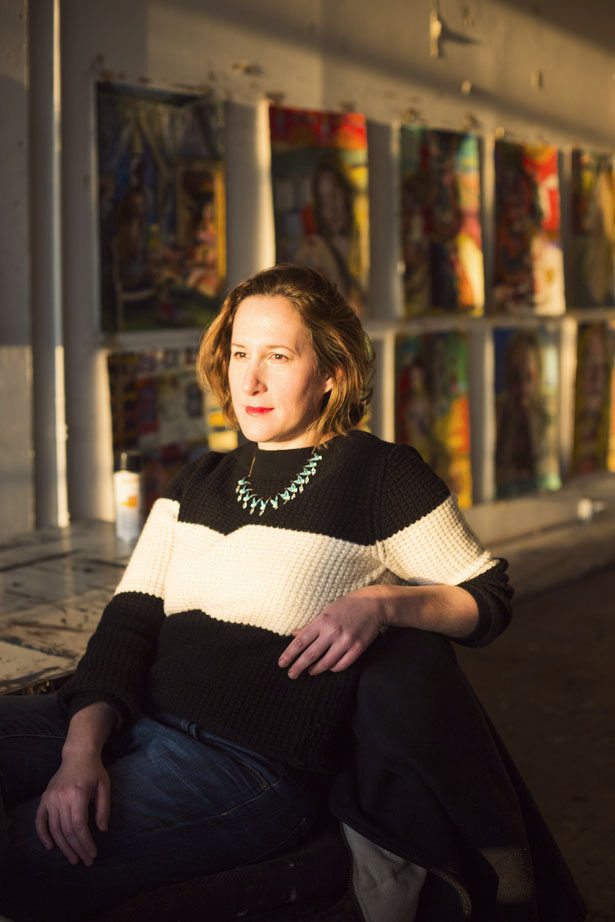 When I moved into this studio, there was a crack lab – literally! – next door, and they would play music so loud that my paintings would fall off the walls. And I’m from Texas, so I’d be like, “Excuse me…could you please turn the music down?” 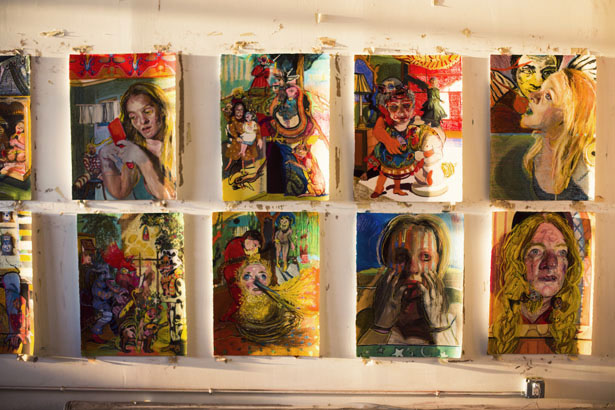 Tell us about these drawings…they’re based on the Grimm Brothers’ Fairytales?

I’m doing anywhere from one to five drawings per story that I chose, and I’m doing about 38 to 40 stories. So it’ll be actually the largest collection of stories ever illustrated by a fine artist of the Grimm’s Tales.

I’ve never really shown drawings before. But it’s the place where a lot of experimentation started…and these feel very free and they come out. I just see the colors and I put them down, they feel very natural. 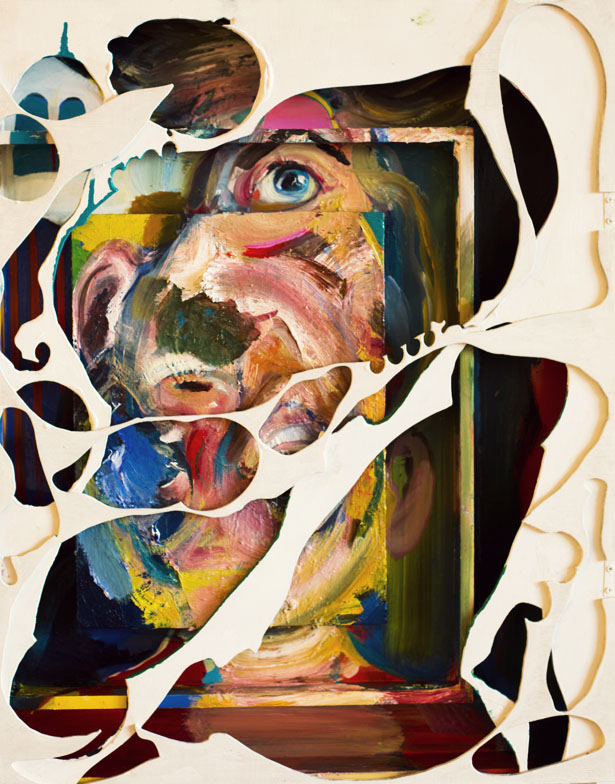 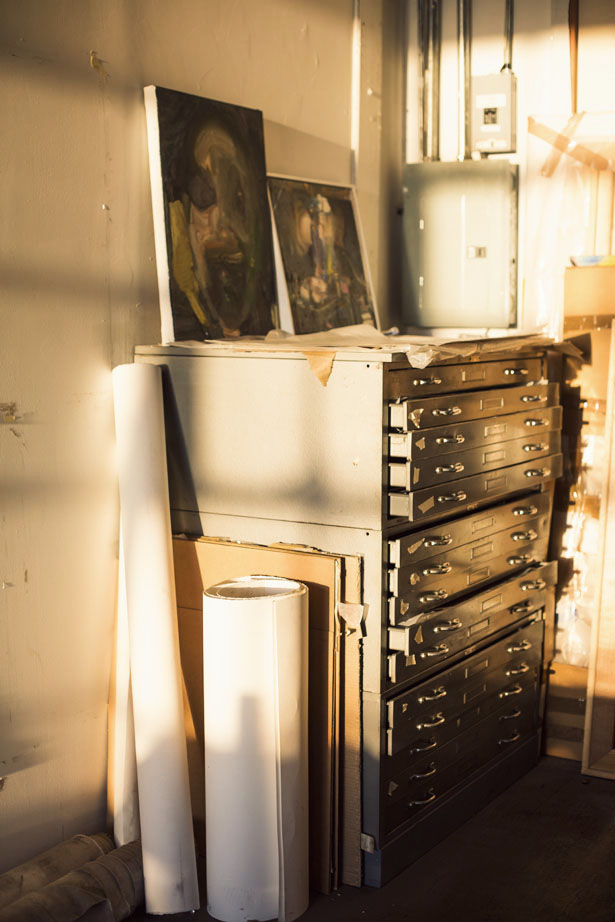 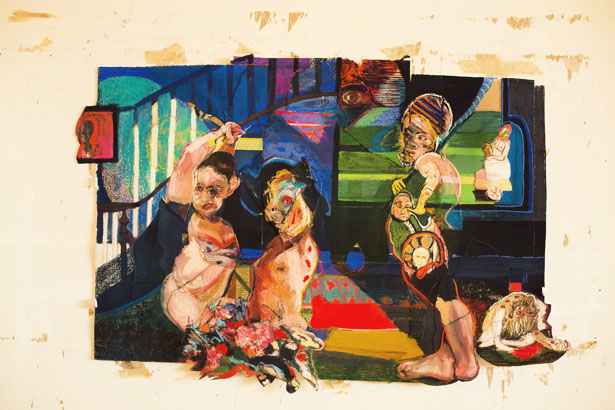 Your pieces are all very beautiful, but there is an unsettling aspect to them…why do you think there is this darkness and creepiness in your work?

Well, I think I read a lot as a child and I have a very vivid imagination…and maybe something having to do with the Southern Gothic, because I read a lot of Joyce Carol Oates and Flannery O’Connor, and magic realism too…but a lot of things with the relationships of power and sex, and women are usually at the center of them.

I think that’s just part of being a woman alive today. These are the things that we think about and we deal with and that are part of our world. So to me, it’s very natural. But I also had sort of an odd upbringing and there were a lot of characters around when I was growing up. 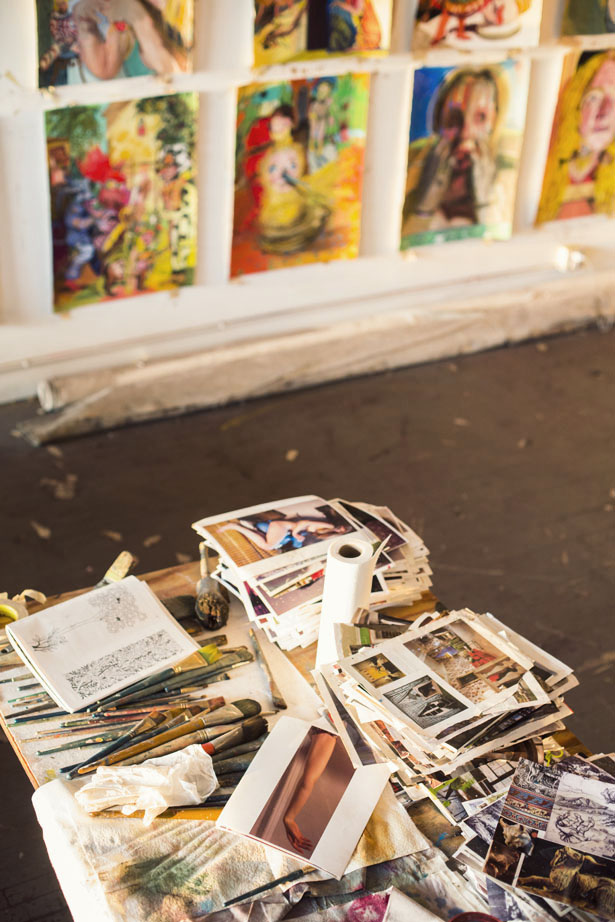 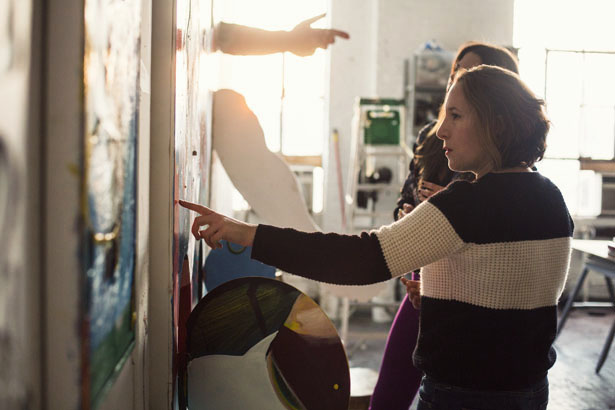 Really, I do think it’s just about life. I travel a lot, and I try to take a month, month and a half every year I can and go somewhere new, so I spent time in Rwanda…I took a bus all over the country, photographing women survivors. Last year I was in Tibet and two monks self-immolated a hundred feet from us. When you’re in the world and you engage, you see things. 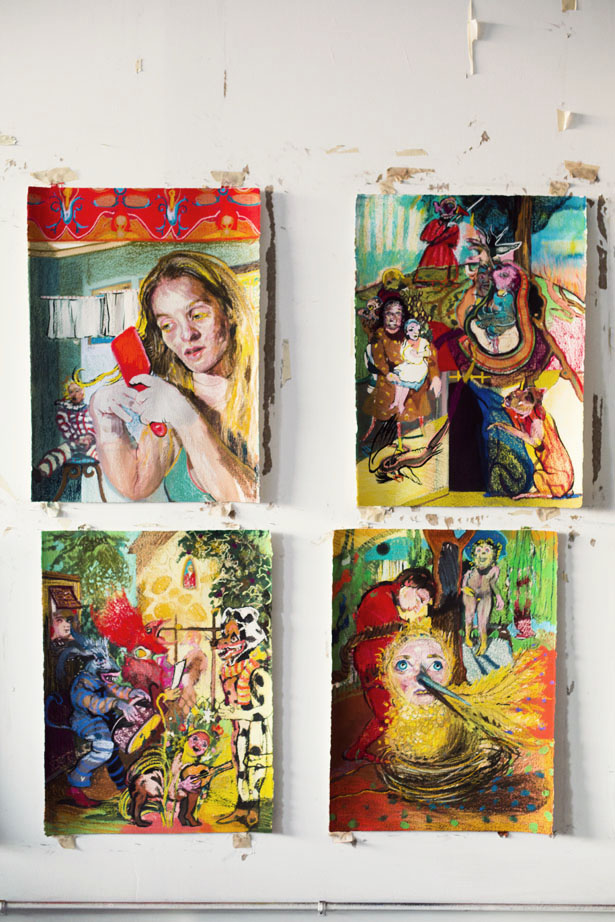 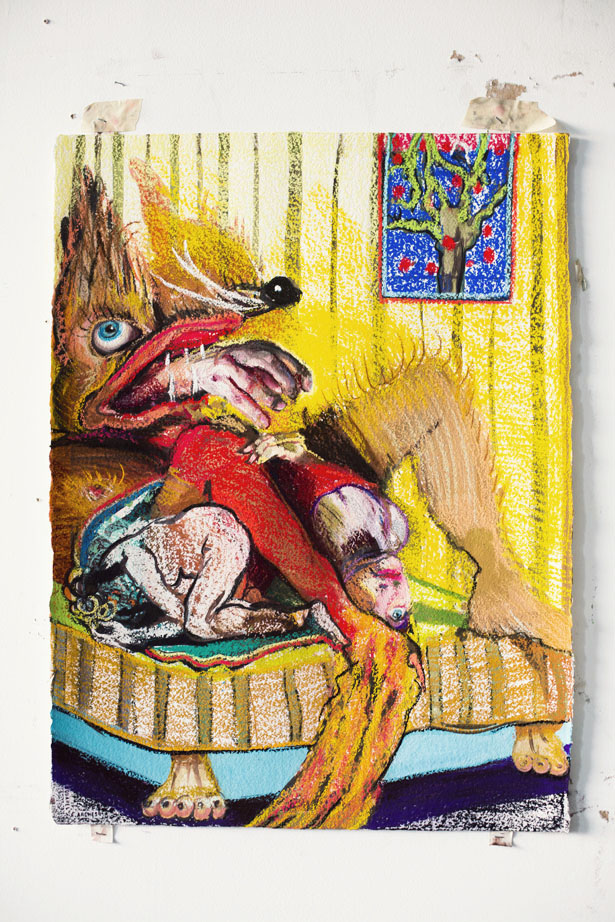 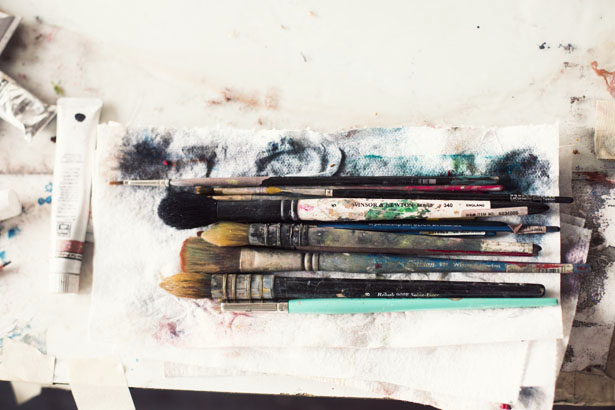 What’s the hardest part about being an artist?

As an artist, you live in your head, you’re in silence all day, in a room alone and you create these worlds…and even then when you’re with people, you feel like you belong to another world, in a way. 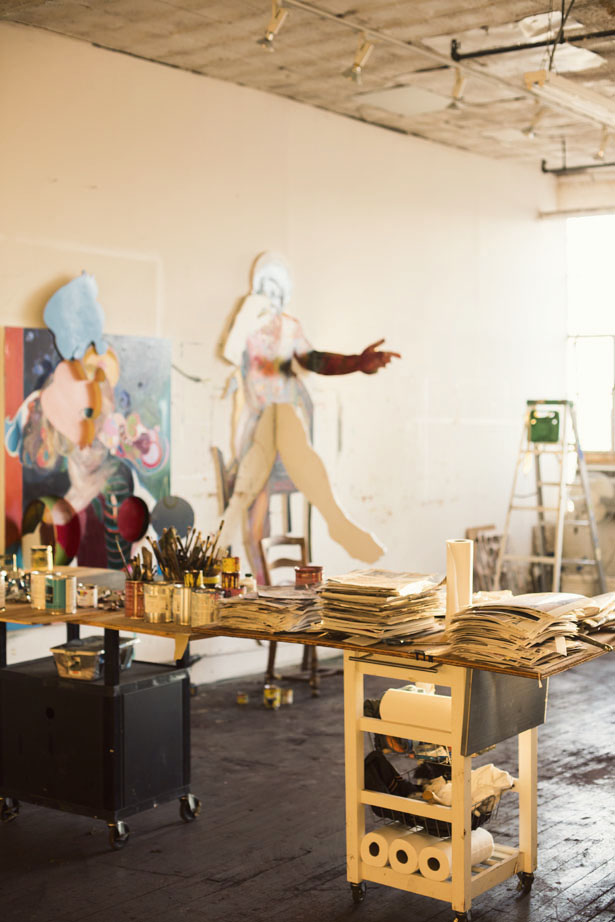