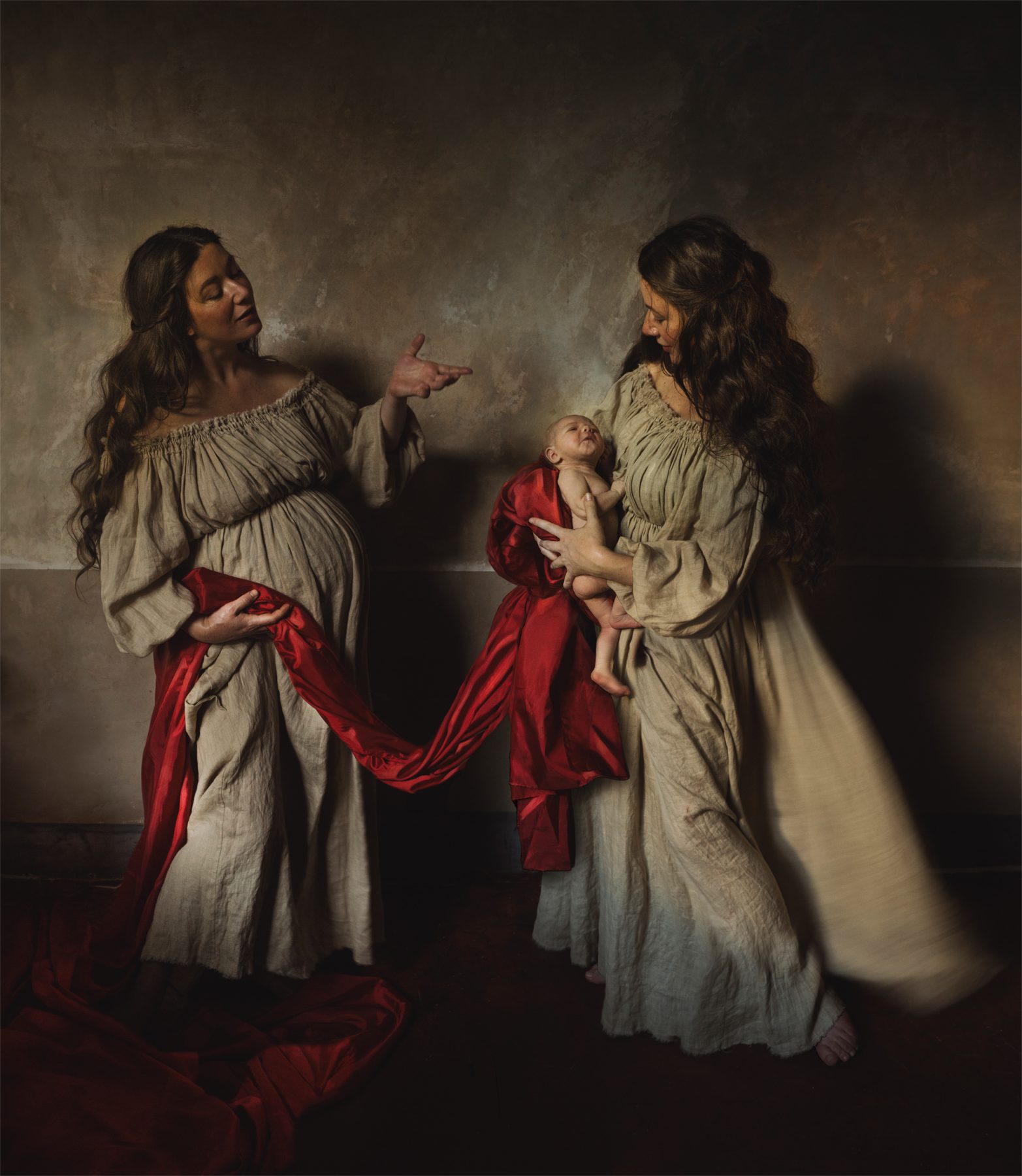 When it all goes wrong, in order to go just right…

I was one week late when my water broke and on New Year’s Eve at 11:58pm we called the maternity “Bonjour, my water broke, should we come in or wait?”… and with that we were on the dark, frosty country roads of Provence making the hour drive to Pertuis nervous and excited and filled with that sort of panic realization there is no turing back now.

We spent most of the night in the examination room hooked up to monitors tracking very faint contractions, the baby’s heart beat, my blood pressure, my cervix, which is all very unpleasant but necessary to get a gauge of what was happening. At about 5 in the morning after I declined being induced to speed along the process, they sent us to our room to wait it out. And wait and wait and wait we did.

They gave me a 48 hour deadline to have the baby from when my water broke. I tried everything from birthing ball maneuvers and stretches to deep visualization meditation for hours and lots of raspberry leaf tea but still nothing. In fact, the faint contractions I was feeling eventually stopped. At four in the afternoon the Sage Femme, which translates to wise woman in French and is their version of a highly trained midwife, came in and said it was time.

We needed to start the induction process.

Of course I cried. Why didn’t my body work? I had prepared for months mentally and physically for a natural birth and I chose one of the best maternities in France for natural birthing. My dreams of floating in a warm bath during contractions were gone. My idea of Kevin wrapped around me on an upright birthing stool were being crushed. I had chosen a natural birth because it was most in line with how I live my life. I don’t even take headache medicine! Getting me to go to the doctor for anything is almost an impossible task and I was, up until this point, proud of myself for taking the vitamins and iron they told me to and doing all the lab work on time, even though I loathed every second of it. And now, my body would be pumped full of synthetic chemicals and my mind focused on the fear of more intense pain than I had prepared for.

We negotiated and they started me out on a low drip to see if it would kick start labor. Hours began to go by with little progress. We played our music, the lights were off and we had the room filled with our faux candles (ok, not a fan of electronic candles in real life but in a hospital they were one of the best purchases EVER!). I had at this point five different cords streaming from my body to devices so I couldn’t get up and walk around or go to the toilet but I was grateful they let me bounce on the birthing ball instead of just lying on the bed which would have been sheer torture for me. Then the sage femme came in and said ok, we are past time, we have to move this along and turned the induction drip all the way up to high and it was as if the room when black and I was thrown against the wall! The pain knocked the life out of me and all I could get out of my mouth, doubled over in pain, was “GIVE ME THE EPIDURAL, GIVE ME THE EPIDURAL NOW, NOW!”  and just like that the doctor was in there and a team of nurses quickly making it happen with massive tears falling out of my eyes from the intensity. It took three people holding my hands for the doctor to be able to administer the epidural and at this point I felt as if my body didn’t even belong to me anymore. I didn’t recognize the sensations, I didn’t understand the forces and behavior I couldn’t control and at this point, to be honest, I was frightened. I had focused all my attention and research on how to have a natural birth I knew nothing about induction, epidurals, and what was later to come…

Once the epidural kicked in I melted into the table. I could relax. The induction machine was left on high and she gave me three hours to progress for a vaginal delivery. Every hour she would come in and check my cervix and for three hours in a row I stayed at 2cm. At 1:30 in the morning she took her gloves off and said, I’m sorry, I think we have to have a c-section. I laughed and said “why not, might as well experience every way to give birth possible.” “Can I still bring my cameras?” In that moment I had to let go of my ideals and just do what needed to be done for the health of the baby who, at this point, was not under distress. I woke Kevin up and said it’s time, right now. From this moment on I kind of just tried to give my body over to science and float my mind above it. It was incredible to watch everyone like a well choreographed ballet, move in perfect harmony through the process instantly. I looked at the female doctor who would be doing the procedure and I said, “just tell me what’s going to happen”. Kevin was changed into scrubs, I was transferred into the operating room and I’ll never forget the anesthesiologist leaning over me in the bright lights and saying in a thick French accent “looks like a movie set right?”, I’ll admit, that made me happy.

Laying on the operating table, strapped down in the shape of a cross, I was shaking violently from the magnitude of the moment and gravity of fear for the two things that were happening. One, I was about to be sliced in half in a major surgery. (I personally consider a teeth cleaning a major medical procedure.) And two, we were about to meet our daughter. Was she ok? Would she be ok? Is there something wrong with her, her lungs, her ability to survive? This moment of the greatest anticipation of my life was here. They brought Kevin to me, told him not to look and had him hold my hand. We stared into each others eyes, mirror reflections of the same emotions. The same thoughts swirling in our heads. Will the surgery go as planned, will our baby be OK? How are our lives about to change forever.

It got weird fast.

The sensations of people pushing and moving your body parts around. At one moment I told Kevin it felt like a waterfall was coming out of me and splashing on the floor. A visualization now represented by the pool of red fabric in the lower left of this image. When I created the first half of this self portrait, 9 months pregnant on the left, the red fabric was the symbolism of the umbilical cord, the last thing that would connect bébé to me and what provided her with life for her first 9 months. I had no idea the pooling on the end would come to represent a story I had never even considered before.

I asked Kevin to talk about something, anything, other than what was happening. I wanted out of my body. I wanted my brain to go far far away. He told me he’d take me to Geneva for really good sushi and get me a massage at the Four Seasons. We could take bébé for a walk around the lake as a new little family. I dove into the dream and held on to the image of the three of us like a warm beam of sunlight on my face… and then with tunnel vision fixated on Kevin’s eyes we both heard her first cries and our eyes went blurry with tears. I kept asking, is she ok, is she ok?… she’s “Parfait!”. They brought her around to me and put us cheek to cheek. I’ll never forget her warmth, the delicate little sound of her cry, the way she breathed in air in her first moments of life. Our energy is connected yet we’re meeting face to face for the first time. I can’t look at the photograph Kevin took without crying, every sensation purely raw with emotion; love, relief, joy, excitement, wonder, gratefulness. I have never felt pure instant love like that in my life. That moment changed me forever.

They took her away with Kevin to do skin on skin bonding while they pieced me back together. Lying there on the operating table alone was difficult but it was over quickly and I was being wheeled down the hall to my new little family. We spent the next three hours alone just the three of us, cuddling, talking, nursing, kissing, and just being in that moment. It was extraordinary.

Kevin and I were both worried about how I would emotionally feel about how our birth ended up playing out. Would I be depressed because I wasn’t a woman who could give birth naturally? Would I feel like a failure, like I hurt our baby with chemicals? Would I feel like my body betrayed me? Here is what I know now: I don’t feel any less a woman because I had an incredibly medically controlled unnatural birth. In fact; the courage you must muster for both moments comes from the same place. I feel just as empowered having made it through, just as proud as if I had been able to have a home birth. What really matters is a healthy baby and maman.

A few days after the birth and things began to settle down, our main sage femme told us her umbilical cord was wrapped around her neck twice and looped around her shoulder and arm which is possibly why she couldn’t begin her decent on her own in the world and if she had, could have ended in a lack of oxygen to her brain which might have caused brain damage or worse. When we found this out, our experience turned into a miracle, turned into a gratefulness that we live in a medically advanced era to be sitting here as we are today, all OK.

I look at this double portrait which started with a piece of raw, red fabric of symbolism and now see how significant the umbilical cord played in our story, giving life, almost losing it, and cutting her free into my arms.

The best advice I can give from my experience is to have a plan and prepare but be ready for anything. If anything comes, it’s ok to ask for a moment to process it. To let go of expectations in order to adapt and in the end reach the same goal of new life. Also, surround yourself with a team of women to support you. I want to think my friends Claire, Erica, Annie and my Doula here in France for being in constant contact with me throughout this process, and not telling me what to do or say but just making each moment ok and less scary. The support was invaluable. For example, Erica told me “every birth is a natural birth!” which helped me accept what was happening. Claire said in her own experience “the 2nd best thing to happen to me in 2018 was an epidural.” which made me not feel like a weak failure in that moment screaming for one. Annie said “you can only plan so much, sometimes stuff just happens. It’s all good, you just want a healthy baby.” … and that is what we got.

This is our birth story on January 3, 2019 at 2:09am when we welcomed our daughter into the world.