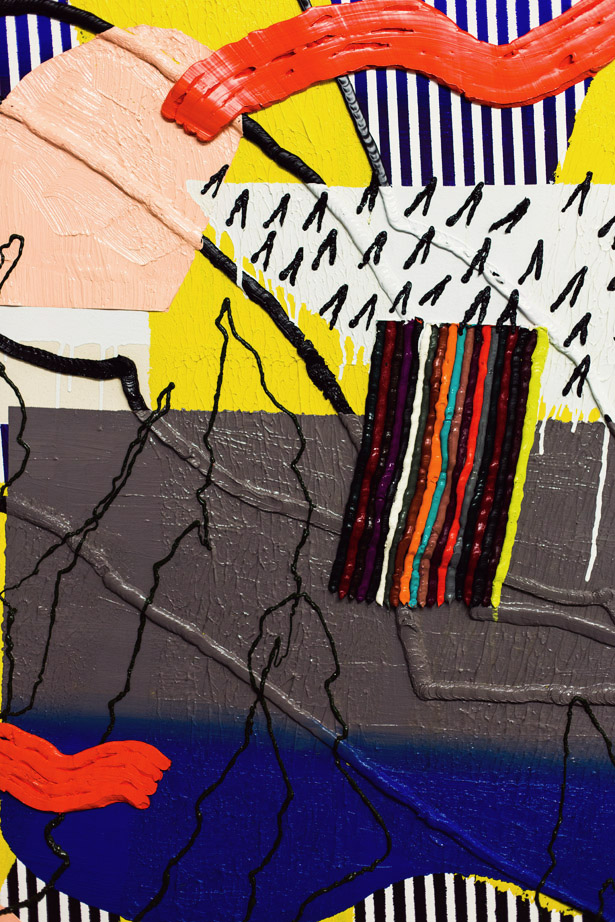 Sometimes you look at a painting to appreciate a scene that someone has brought to life. And sometimes you look at a painting and you’re filled with a visceral, intense energy. Such is the work of talented abstract painter Trudy Benson. While still a relatively young artist, Trudy has already begun to stake her claim in the abstract art scene, and it’s easy to see why. Her work has – both physically and intellectually – several layers to it, mesmerizing the viewer.

We were lucky enough to get a tour of Trudy’s studio with our friend Maria Brito and to talk to her about her work, what it’s like to be written about in the New York Times, and how much paint she actually uses… 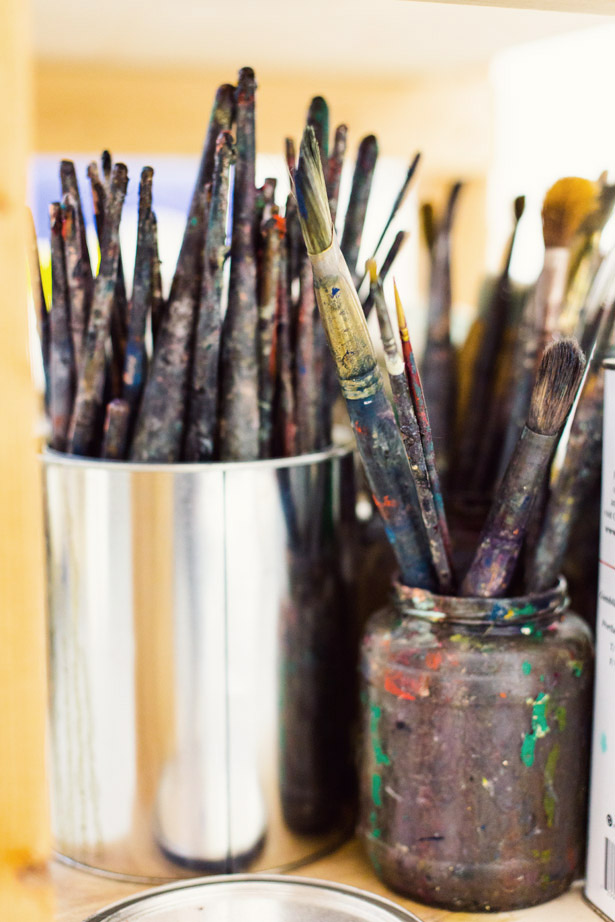 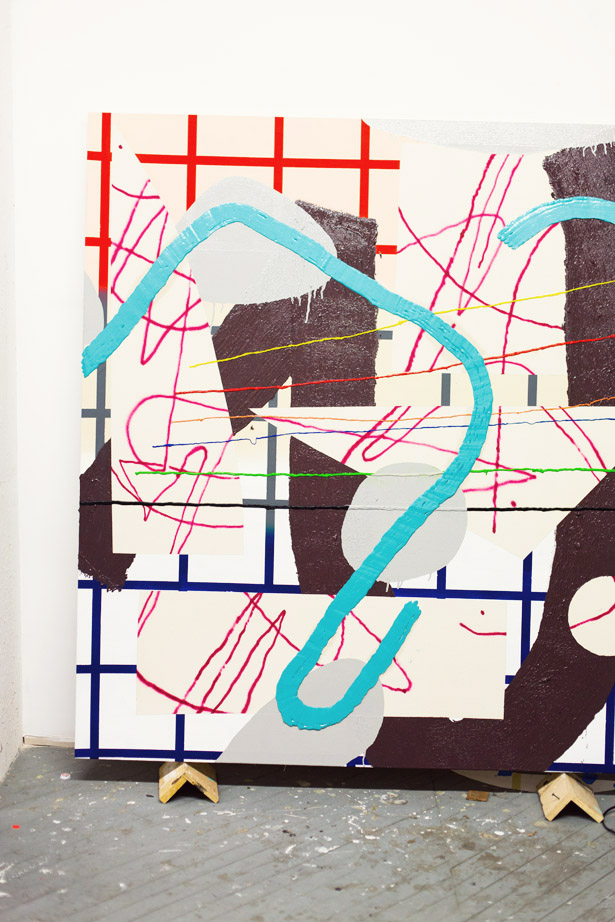 On her painting style:

I’m thinking about different iterations of things – to me, a red stroke there could be almost a 3D painting of [Roy Lichtenstein’s] brushstroke lithograph, which was a lithograph of a painting. So there’s different layers here. But as far as the process goes, I usually start off really simply…here, I started off with this really simple composition of the different windows…but from there, the rest of the painting is totally intuitive. It’s a slow process, so I’m not working like Jackson Pollock or anything.

I work on a lot [of pieces] at once, because I have to. There’s a lot of taping off over the oil paint. I use a hair pick, a plastic hair-pick, and once I’ve taped off a circle and filled it in with really thick oil paint, then I dragged the comb through it. And then these are squeezed out of the tube, and then I scraped them down with a squeegee. 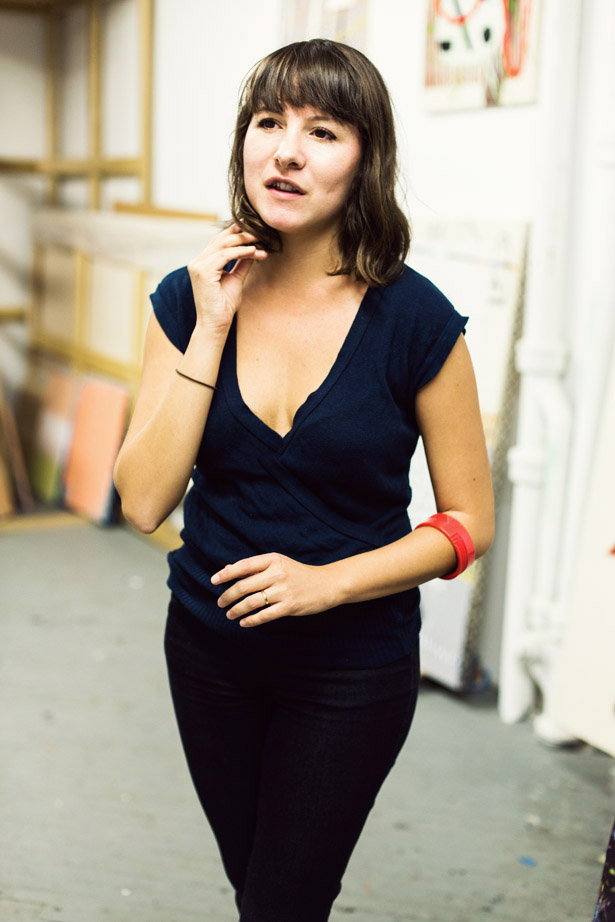 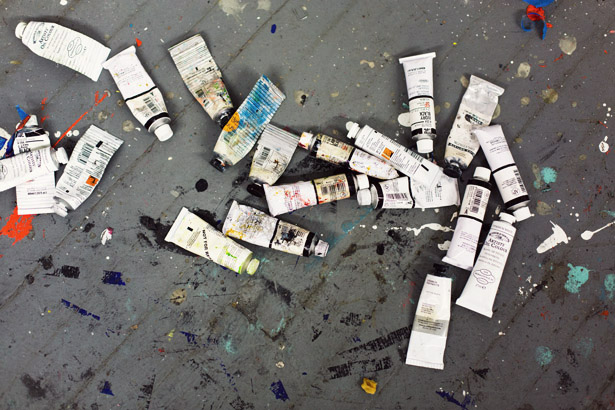 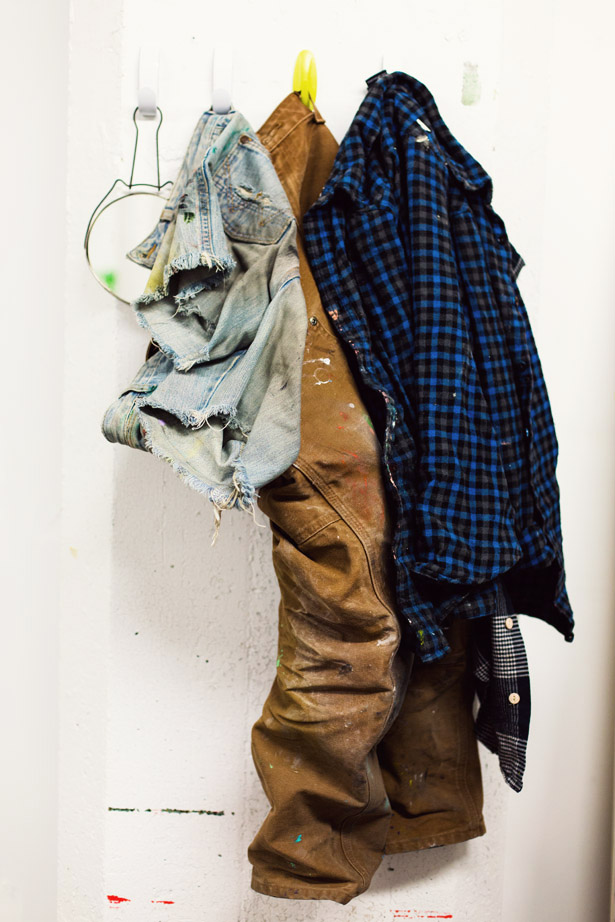 On her beginnings in abstract painting:

You know Jules de Balincourt, the painter? He did a studio visit when I was in grad school, and my paintings became more and more expressive, and I was making these Batman paintings – that was when the Batman movies were coming out – and it was barely figurative but you could still kind of tell it was a face, and then he was like, Well, why are you still making figurative paintings? Have you made any abstract paintings? And I was like, Oh. So I just started trying to make them, and I realized I had gotten bored with figuration and I was just looking for images to paint where it wasn’t necessarily relevant to how the painting was painted. But I think some of these, they’re still kind of still lives, in a way. Sometimes I think about them as still lives of digital programs. 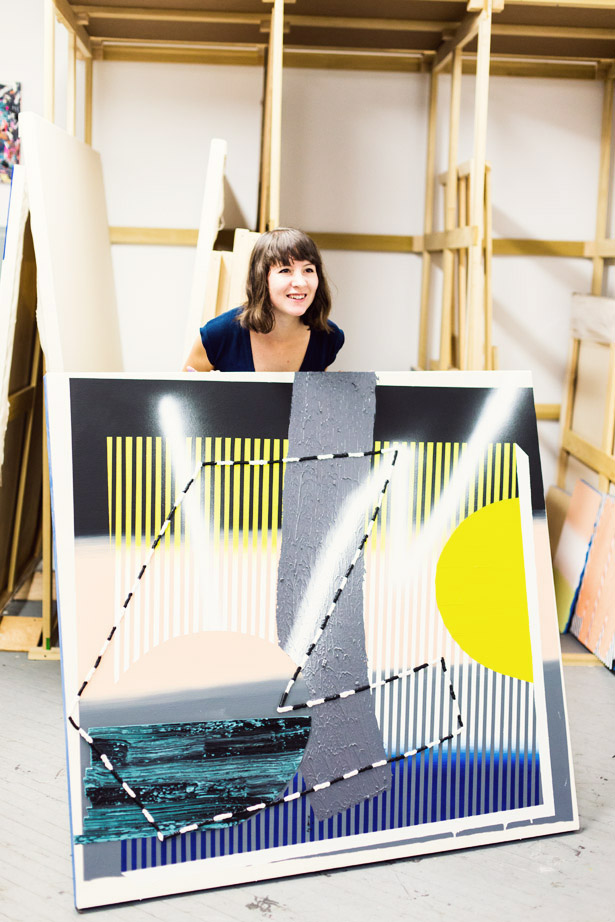 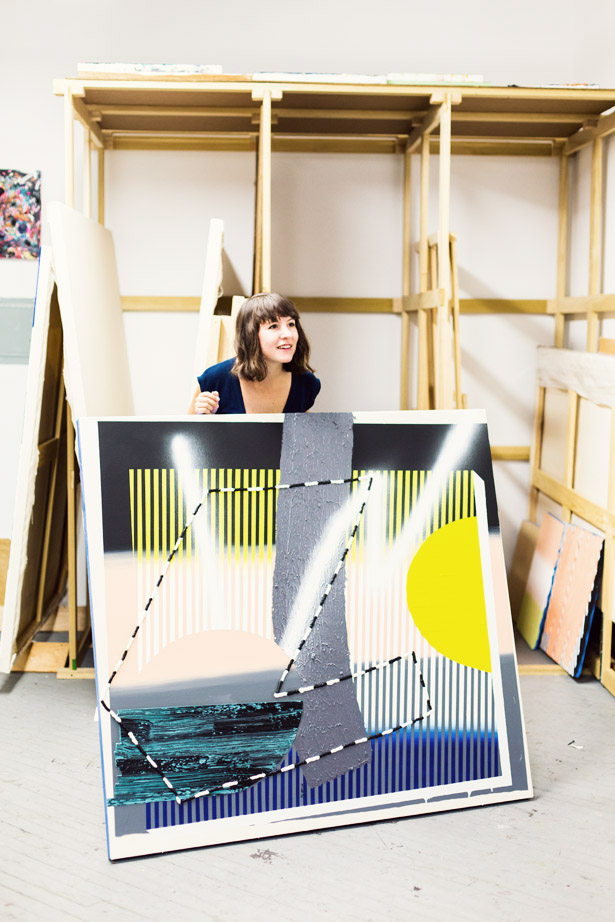 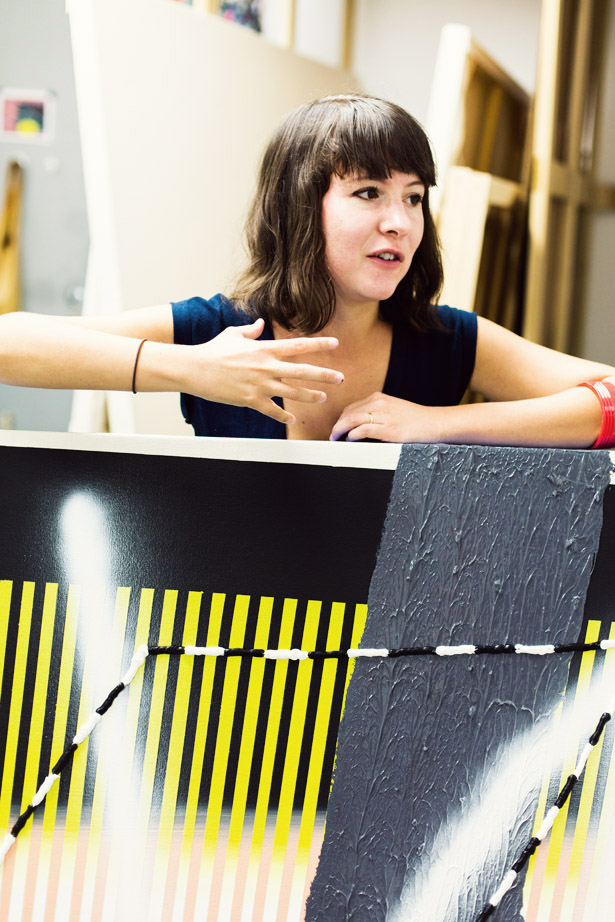 On inspiration from her childhood:

My dad’s been a computer programmer since the 70s, and I remember he used to take me to Take Your Daughter to Work Day, so I always used to draw on his computer and that’s the only thing I did. I wasn’t drawing anything, I was just kind of playing with the tools.

After I started making these pieces, they felt kind of familiar to me. I feel like I approached things in the same way as I did then…there’s a sense of freedom, I guess, when you’re drawing on a computer, or just doodling on a piece of paper, or on your phone or something, that I respond to. That’s what I really enjoyed about making these. 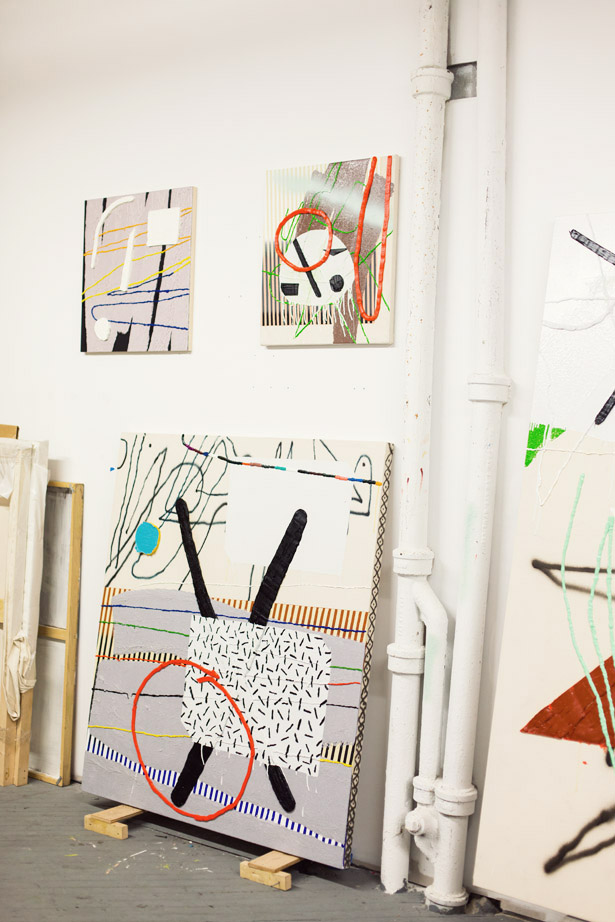 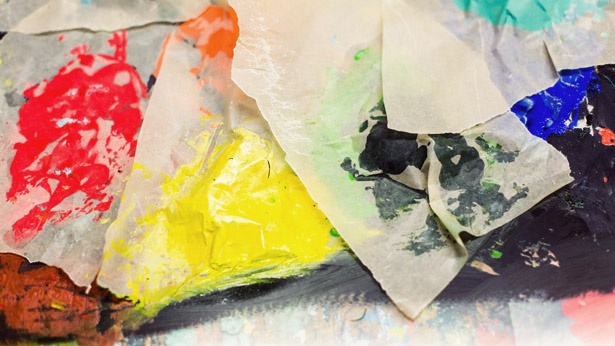 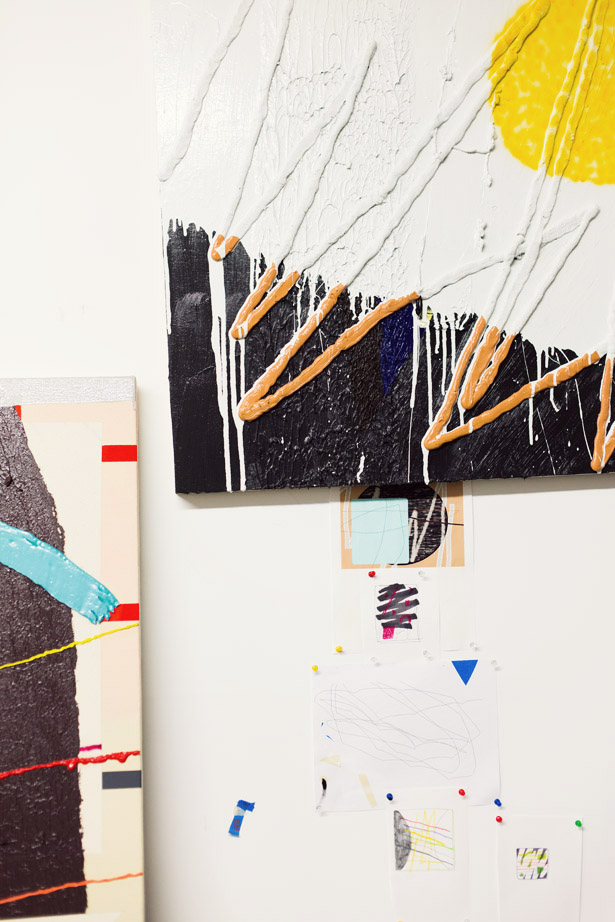 A friend of mine, Johnny Abrahams – he had his first solo show at Jack Hanley Gallery, and he does these paintings…they’re totally black and white but they have this crazy effect when you start to look at them, they start to flash and create these rainbows, even though they’re all black and white. To me they kind of seem like they’re gifs or something…when they were installed, the paintings were huge and hung really close together, so being in the room was kind of like, everything was flashing the whole time but it was totally analog painting.

I also like Kerstin Brätsch. And I just thought of another emerging artist – Mariah Dekkenga. Her work is also influenced by digital imaging, but she also makes these screensavers. She does really cool stuff. 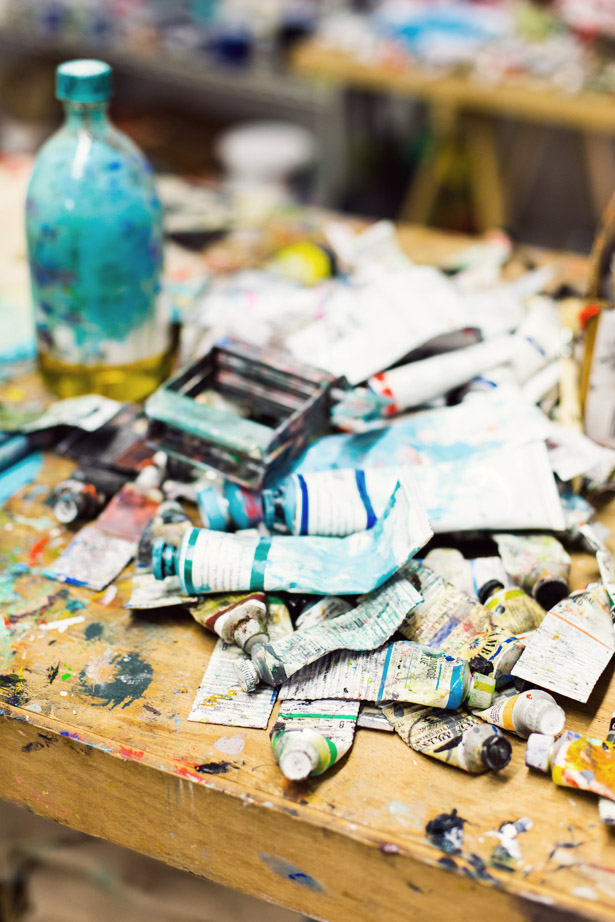 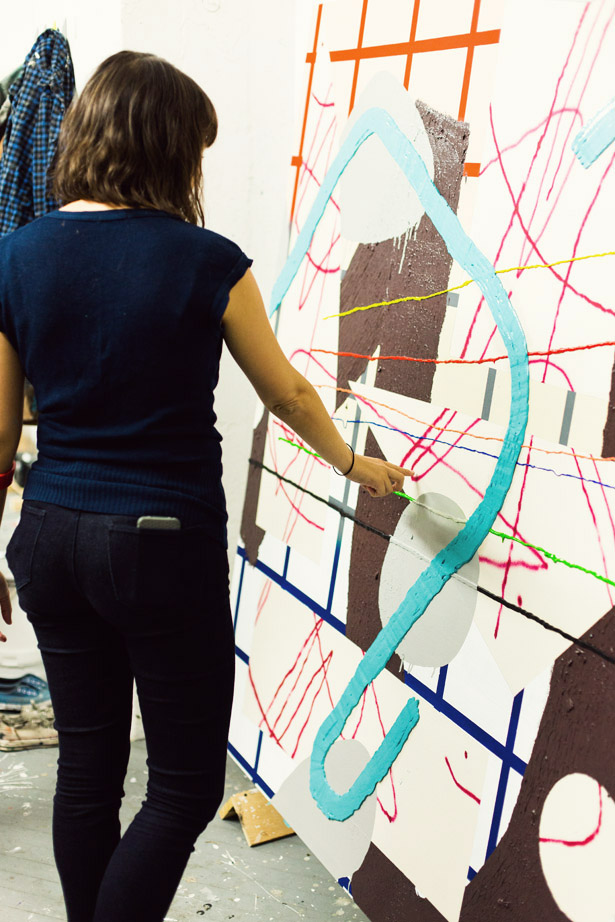 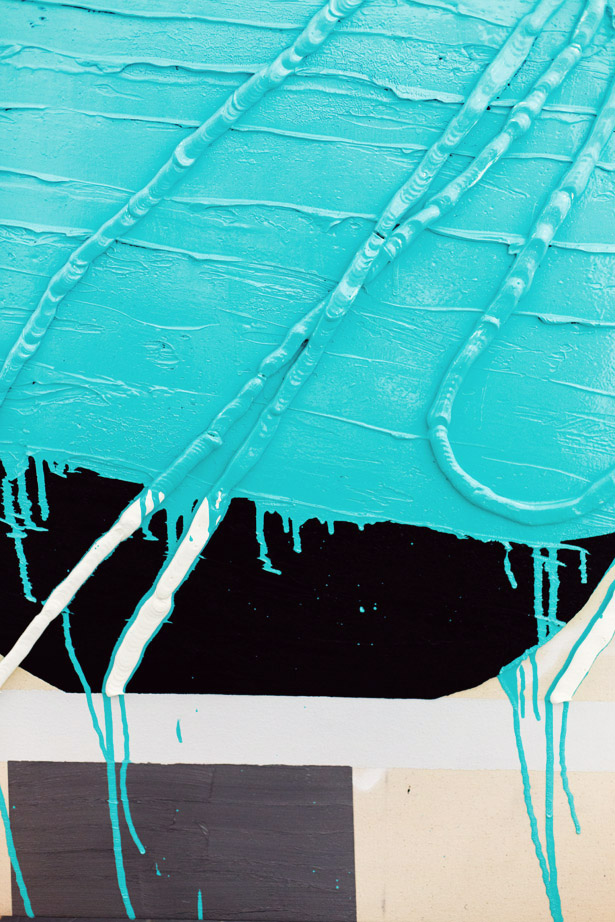 On the importance of physical paintings:

People are always surprised when they come to my studio…some people only see pictures of them online and they don’t realize how much paint is actually on them. That’s kind of the most important thing, is that these aren’t digital prints.

I think it’s really important to be making actual paintings right now. I don’t really ever think people stopped making paintings…it does become cyclical. But I do think it’s really important to making paintings right now. Maybe the people who are actually painting are making more expressive work or something because that’s one thing that you can’t do with your phone or your computer. You can see a picture of it, but it’s totally different in person, always, even if it’s an illusionistic painting. 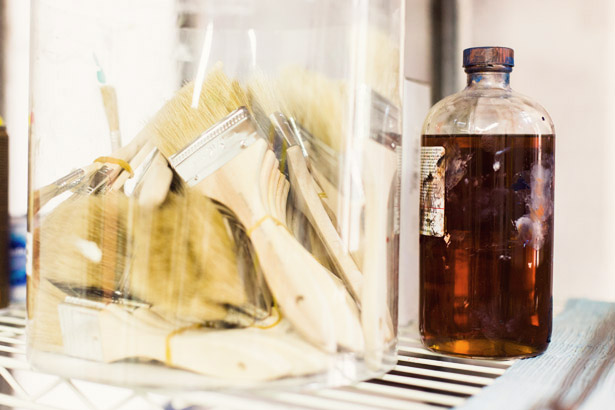 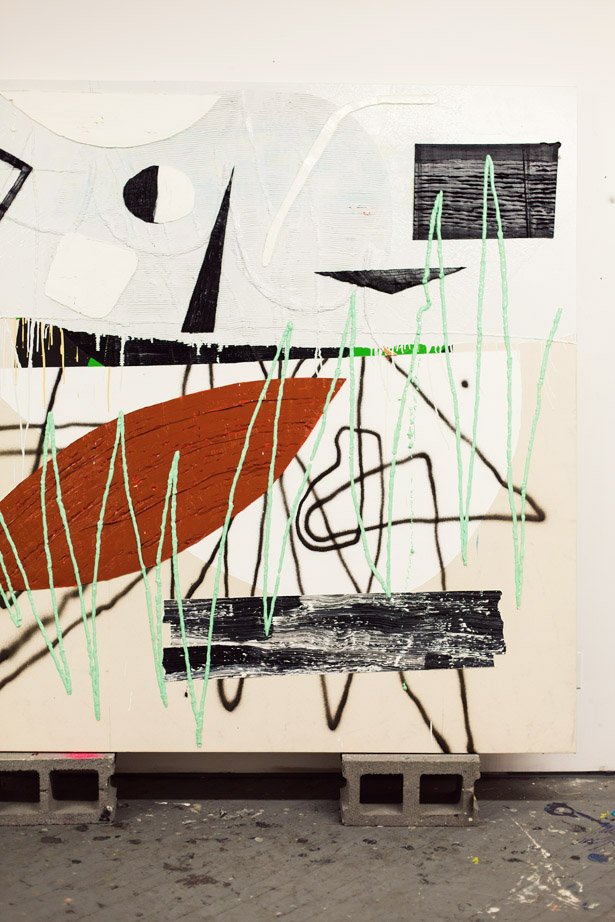 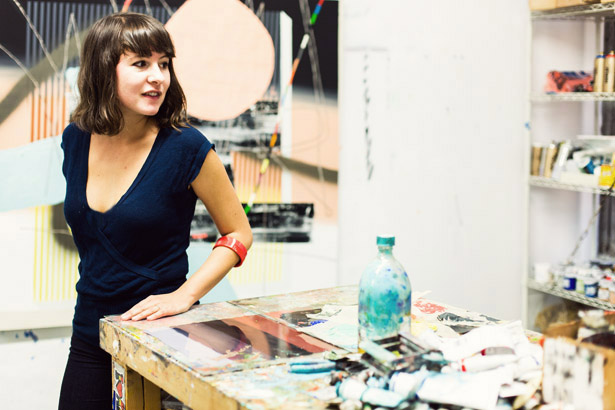 What was it like to have a write-up in the New York Times?

I remember Sean asking me, “What do you want to have happen with the show?” And I was like, “Oh, I would love to have the New York Times review it,” and I was just kind of…I didn’t really know if that would happen or not! So that’s kind of been my dream for a long time. I was really happy with it. 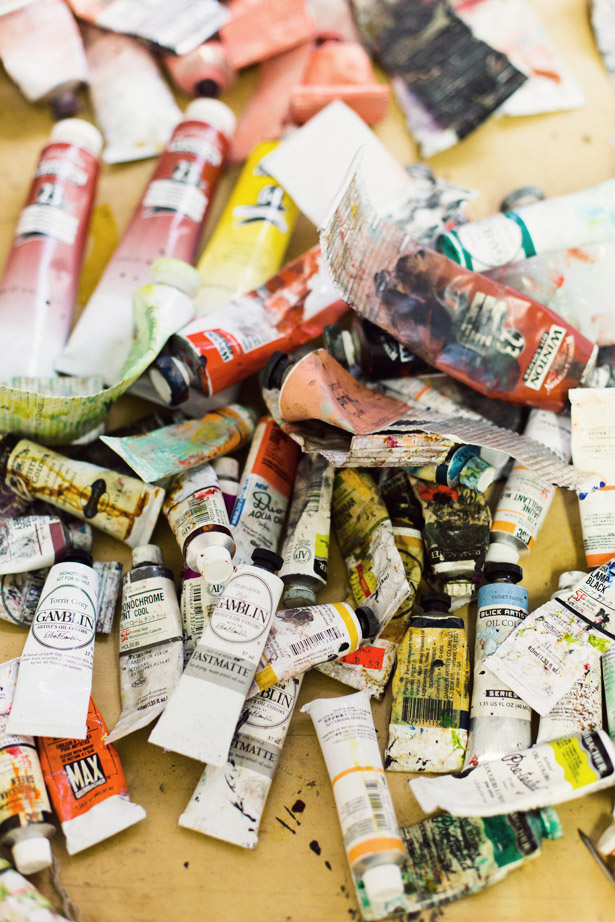 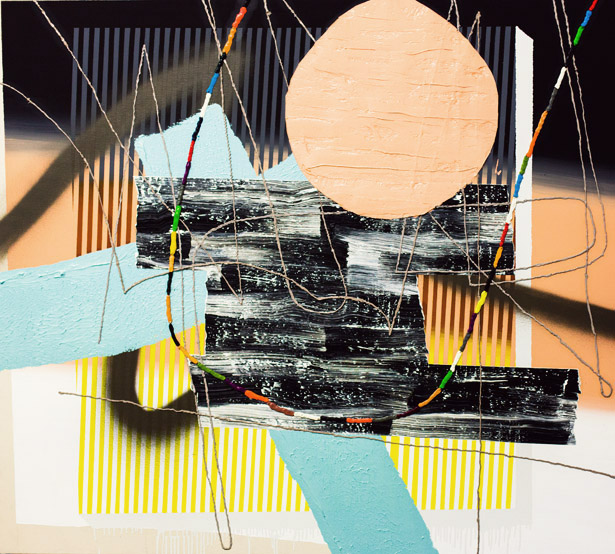 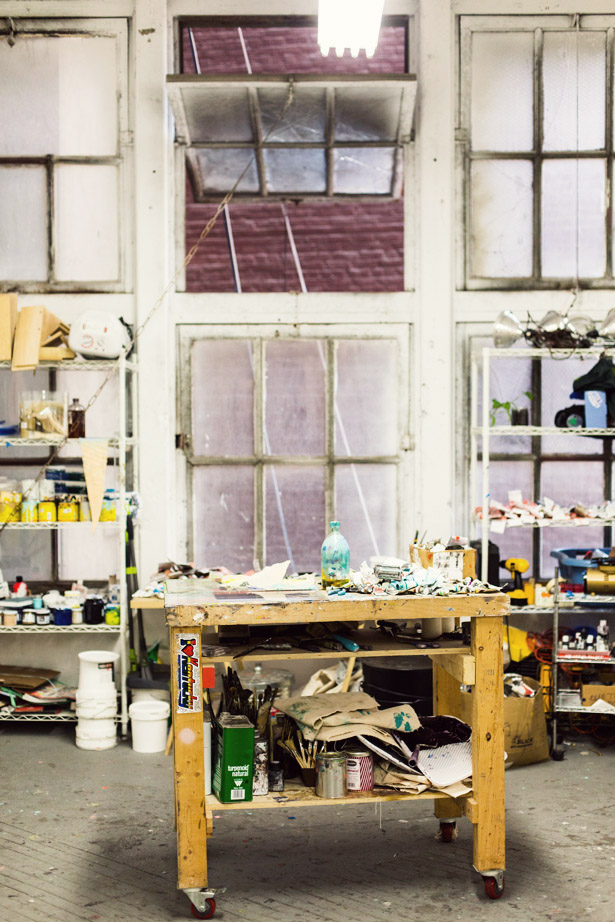 Your husband, Russell Tyler, also paints. How much paint do you go through between the two of you?

Ha! He actually uses less, he’s making smaller work. I think I use more paint than him…because it’s so thick. We both use a lot of paint. I don’t even know how much! 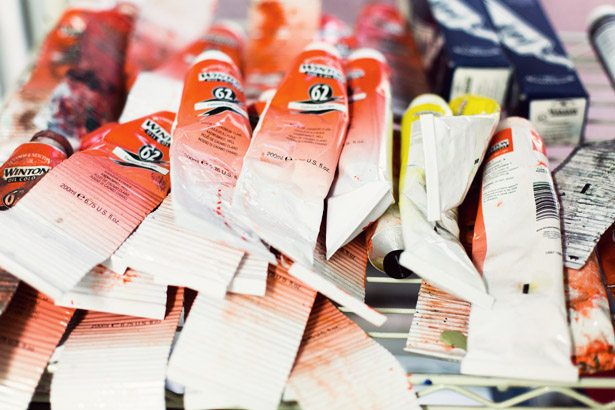 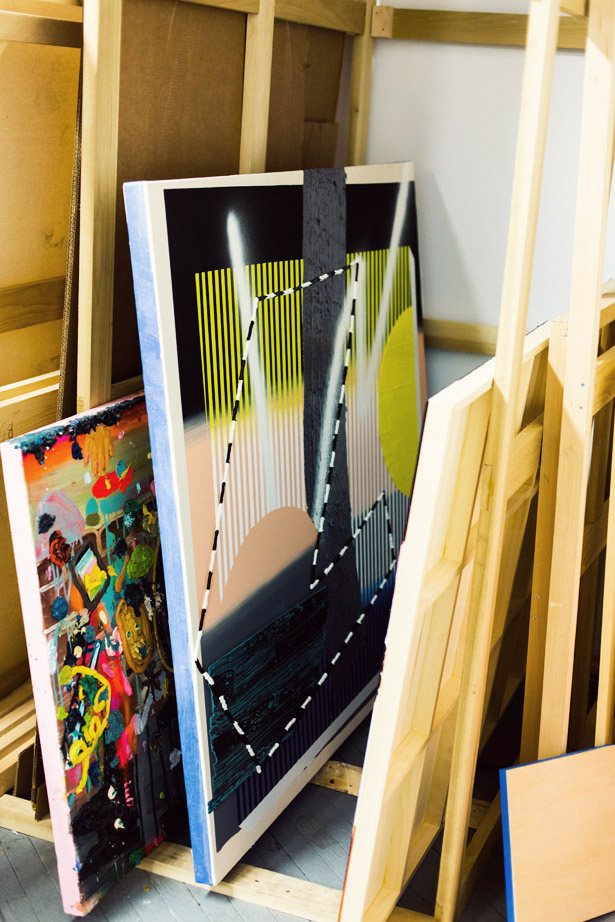 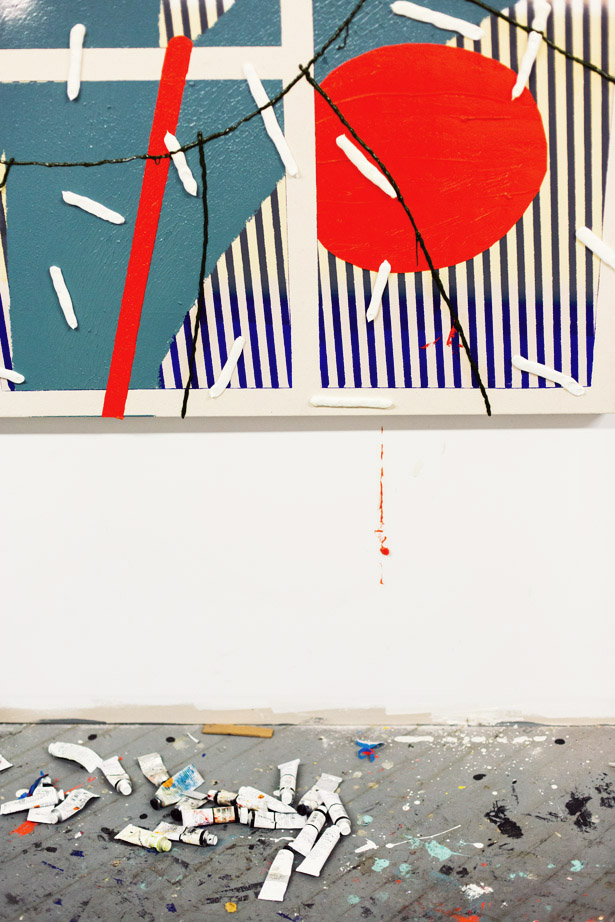 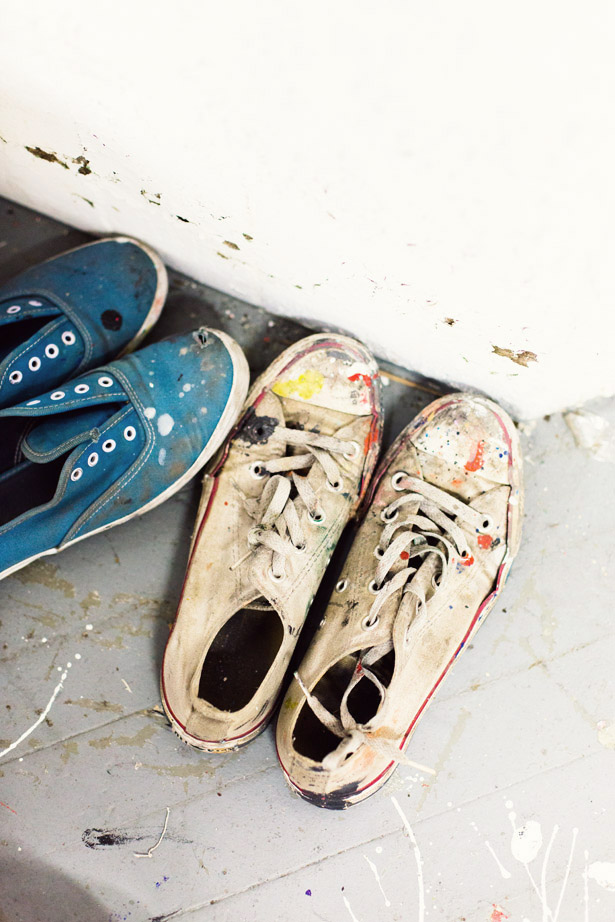 If you’re in New York City, you can see Trudy’s work here!