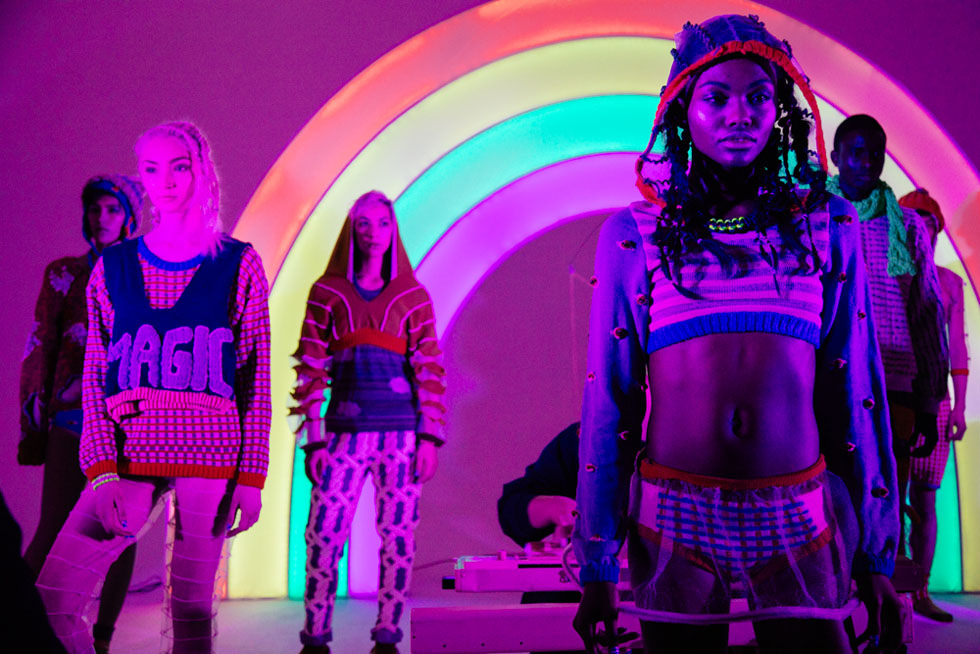 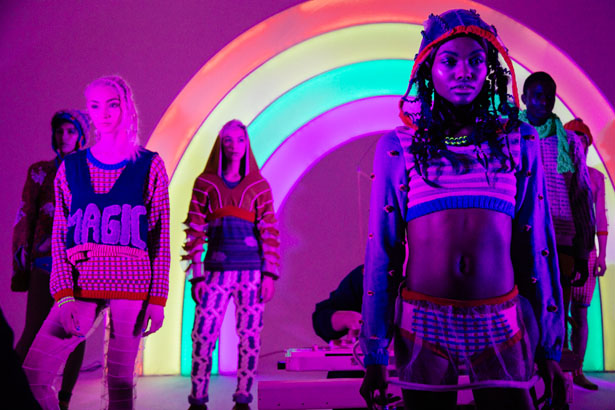 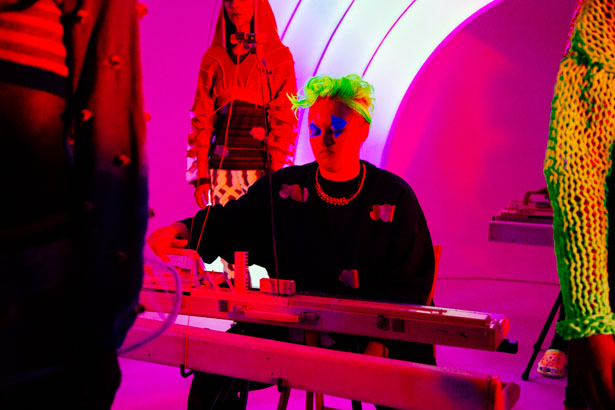 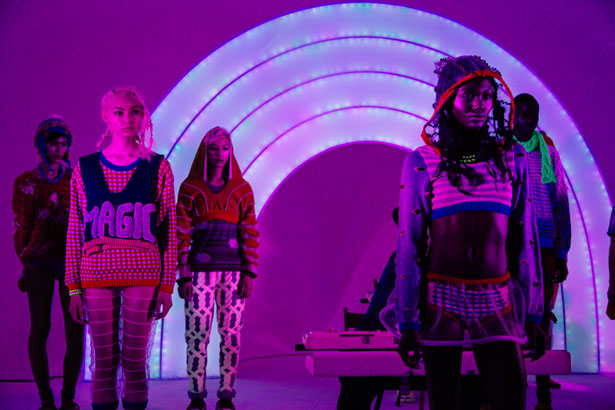 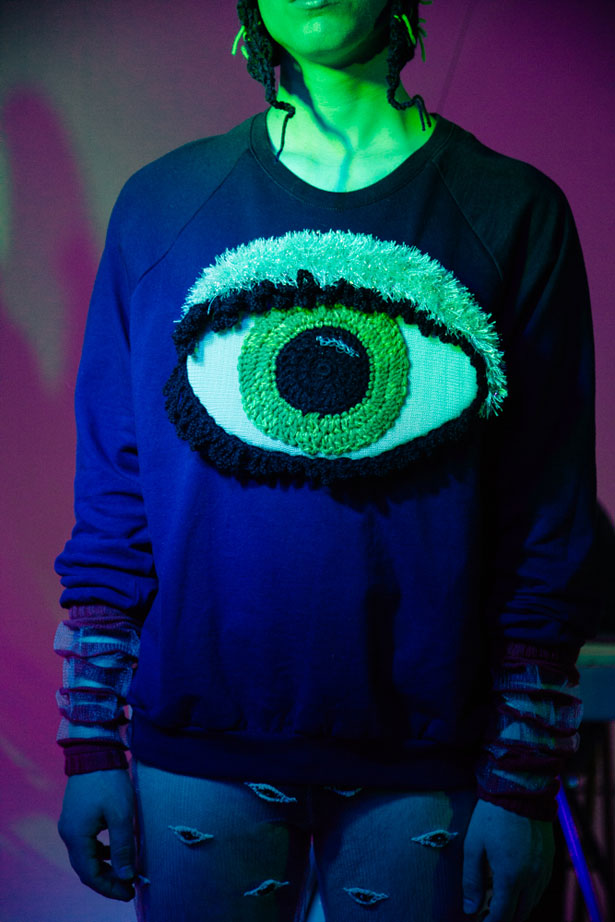 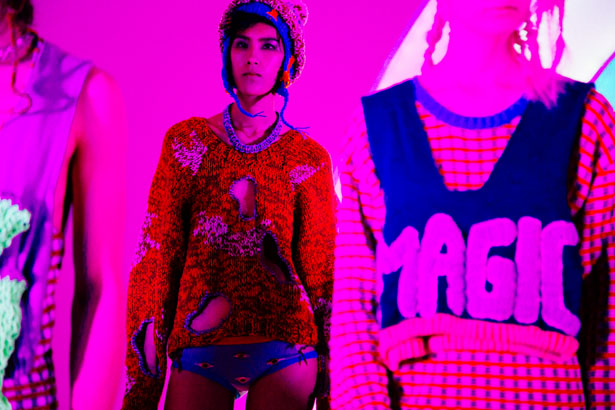 Your first collection openly explored the ideas of cultural anxiety. Is it important for you that each collection has a strong statement?

I guess the body theme is pretty consistent, however, each specific individual collection has its own concept. Usually it relates to body stuff.

When you create your pieces, who are you hoping wears them?

I see my collection as mostly unisex, so I see it on boys and girls. When I’m designing, I have an assistant who has a great eye for color. She’s my muse, Amy Cakes Dankydank. She’s super cool. She started interning for me in 2011 and since then I’ve brought her on full time and she works with me on the collections. 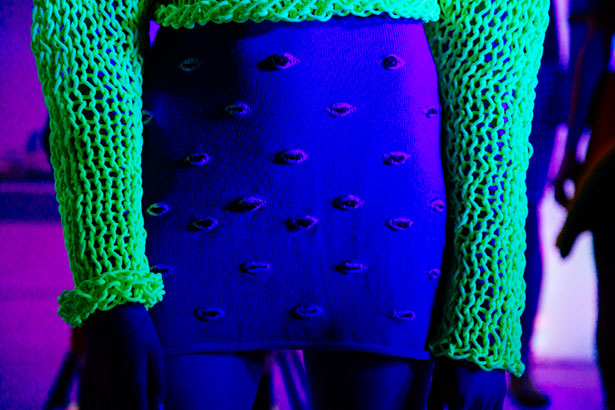 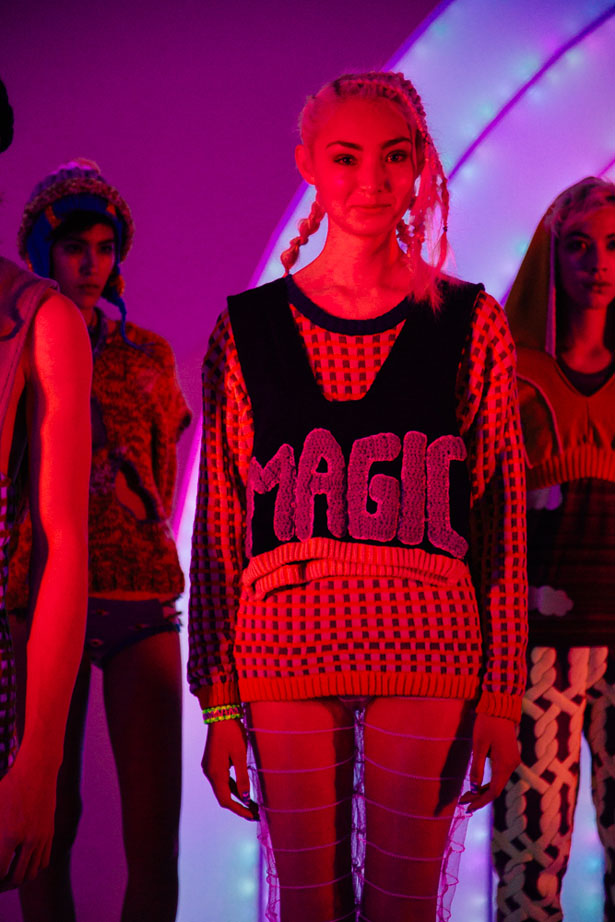 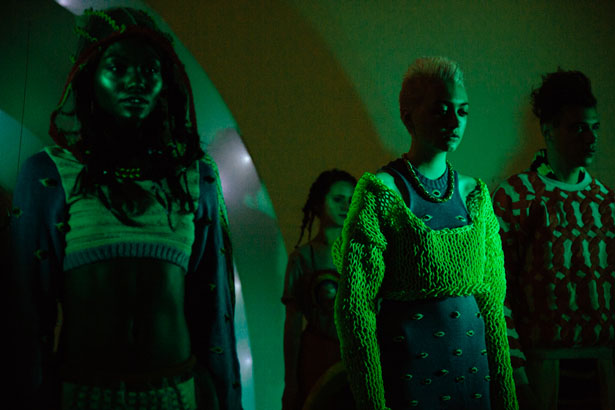 How did you get started as a designer?

I guess I’ve been pursuing knitting both through art and fashion, but the main thing that solidified that I should do fashion is that I sent some of my work to an art critic named Glen Adamson…he responded immediately but he was like, This is great, but why don’t you make this wearable? 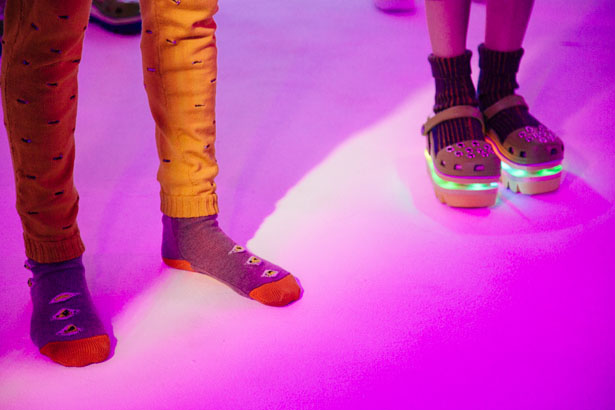 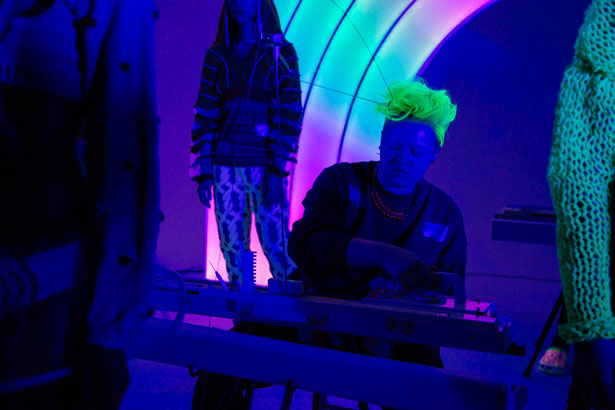 What has surprised you about working in knits?

I find it really surprising that not many people are doing it. I know most people have knits in their collection but I didn’t know how they were doing it or who was knitting it. When I was first involved in the industry, I was really surprised to see how few people are making things themselves. I have a gang of three knitters, but I mostly create all of the samples myself. My team mostly works on my baby collection, but they also are able to come help me whenever I need it on adult stuff as well.

I use a lot of Peruvian alpaca and Italian wools. Since I make everything myself, I’m pretty snobby about the materials. Some things take 40 hours to knit, I don’t want to touch something nasty for 40 hours. 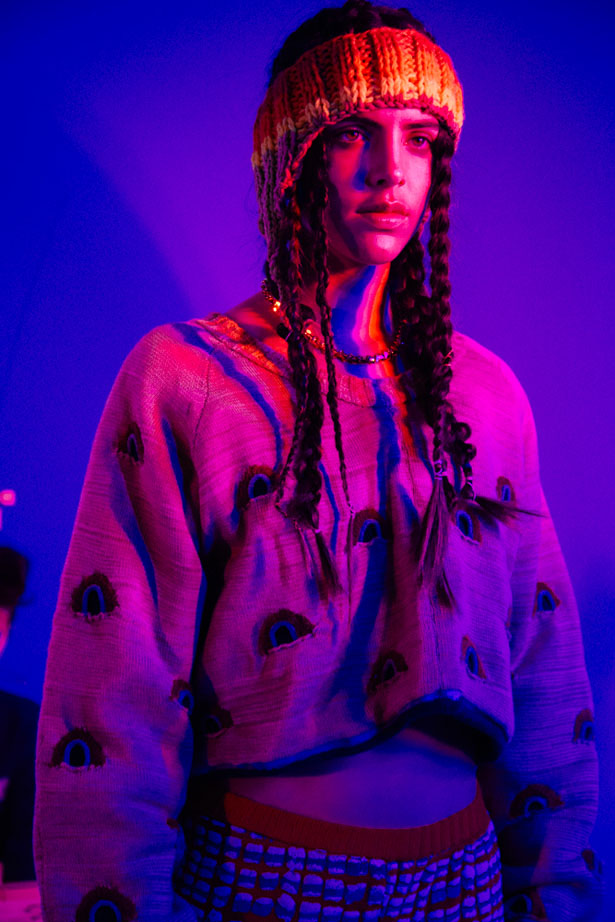 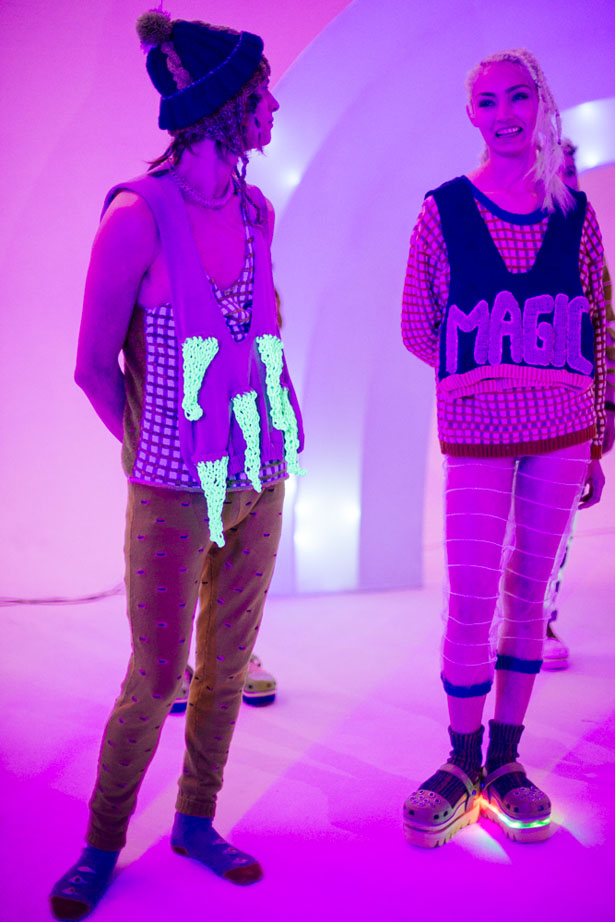 Who are the people you look up to or wish to emulate in your business?

I don’t really look at fashion that much, it’s not really an interest for me. I just know enough to not be embarrassing.

My biggest inspiration – while I’m not really involved in the Maker movement, because I’m in fashion, I’m very inspired by the people in my community who are hand making ceramics or hand wood working. All the people who are making things by hand across the US are really inspiring to me.

We try to do the same as much as we can – the baby collection is all made in house, but for the adult collection, it depends on the orders. I always try and have it made in the US.

Talk to us about babyDEGEN!

My mom had really been hounding me about doing a baby line forever, for some reason last year I was like, Wow, it would be cool to do a baby line! It felt like it was my idea even though my mom has been pushing it. I just started doing it – last season was my first season – and I love it. 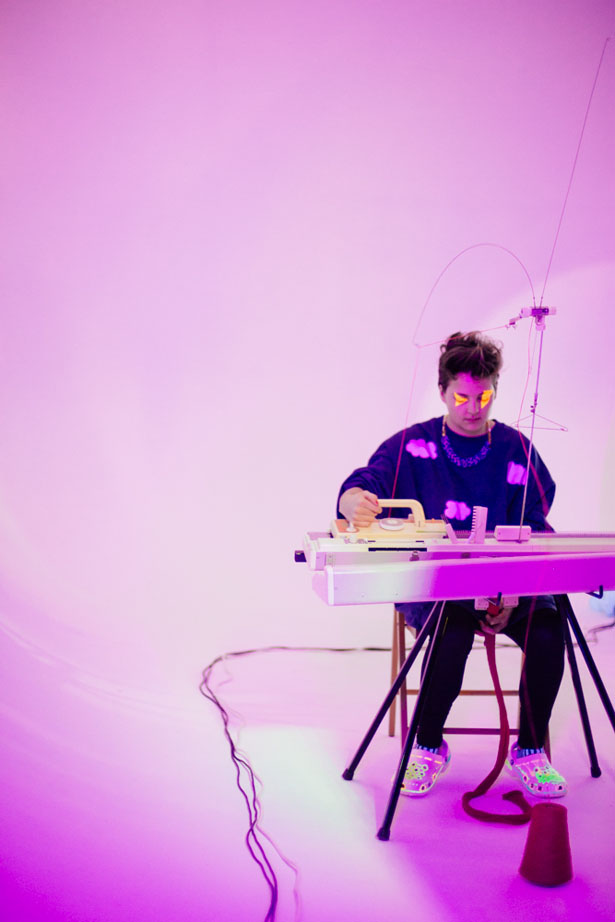 Live knitters working as part of the show! 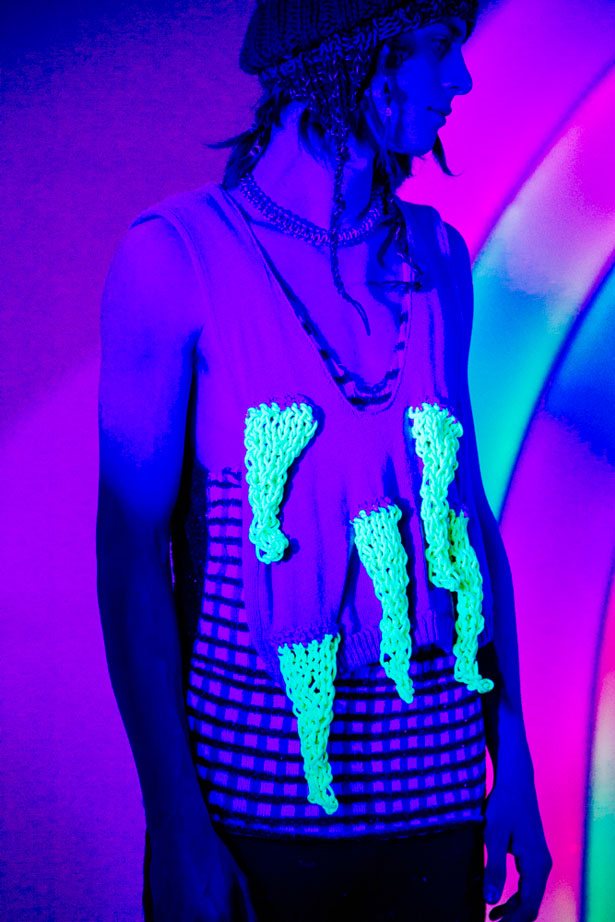 You’ve had some incredible collaborations in the past. What draws you to collaboration? What made you want to work with the artists you did?

I love collaboration because all I am really interested in is experimenting with all types of media and aesthetics within the realm of knitting. I really like to work with people who don’t know anything about knitting, and create a beneficial mutual vision.

I did a large part of the VS Pink collection – which was cool because I got to see DEGEN on supermodels, but it was a challenge to make pieces that were small enough to show off the lingerie.

I also really like shoes, I like doing shoe collaborations. I’m collaborating with Crocs, which I’m really excited about. I think Crocs are not the most attractive shoe, and I thought it would be a fun challenge to make the most cool Croc ever, because they’re known for being comfortable but not necessarily cool. 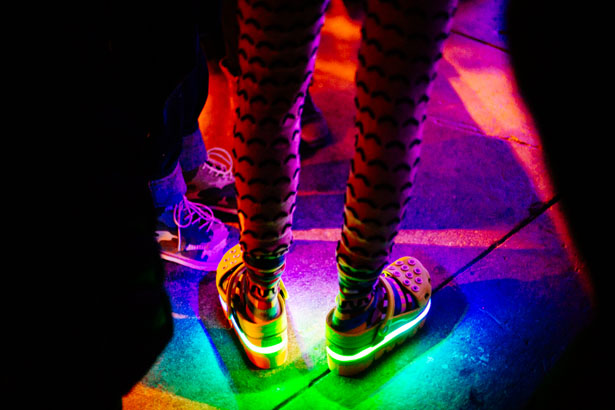 It was super easy to spot Lindsay throughout the show…all you had to do was find the LED-lit rainbow Crocs! 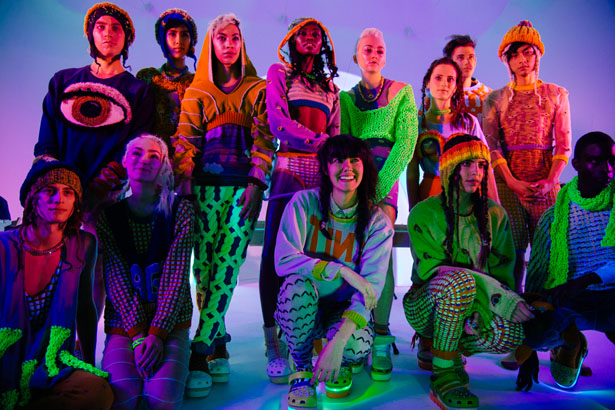 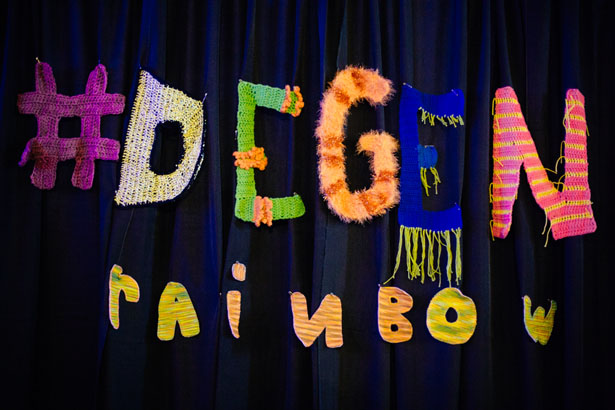