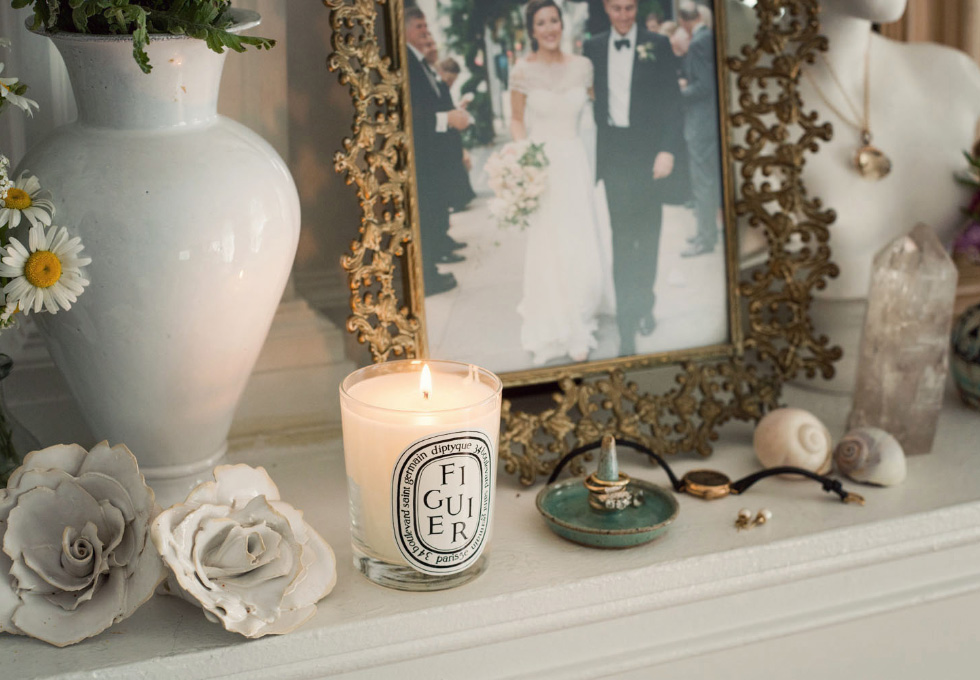 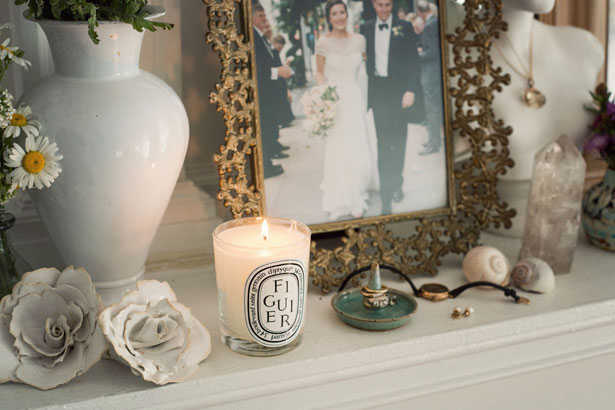 Candles are a nightly ritual for me in our home. It not only perfumes the air into a story of that moment in time but it creates an ambiance that soothes my soul. Everyone looks more beautiful bathed in candle light and no room is complete without it. One of the best gifts I love to receive is that of a beautifully scented candle. Like in the above photograph, Kevin slipped this Fig Tree Diptyque candle under the Christmas tree for me, which I have saved to burn in June when figs are in season. It smells of summer and her grassiness, reminding me of my happiest moments in France each time I light it.

I recently had the opportunity to interview their very French and chic creative director, Myriam Badault, at a pop-up Bazaar at The Invisible Dog Art Center in Brooklyn. 34 is a signifiant number for the brand I came to learn. It is the address of the starting point for Diptyque, the original store in Paris at 34 Saint Germain founded over 50 years ago and which still stands to this day. The name Diptyque actually derived from the structure of this store’s two facing windows. Voilà! But that’s not all – I came to find out that this brand is so much more than beautiful perfume candles.

Founded in 1961 by three friends: a painter, a set designer and an interior designer, they originally created printed upholstery fabrics. Soon after opening the shop they expanded their wares to become a sort of stylish Parisian bazaar, selling found objects from around the world with amusements of discovery from their artistic endeavors. It wasn’t until 1963 they began producing candles and perfumes in 1968 which the house is so known for today. 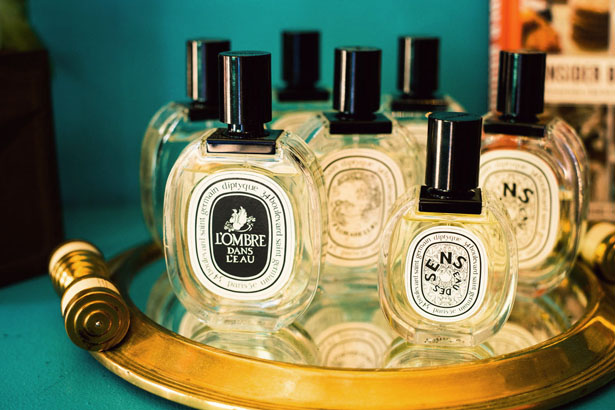 Drawing on their heritage as a brand founded by artists, Myriam focuses very closely on working with artisans in many facets of the brand. If it’s sending a perfumer (or scent catcher as she refers to them) out for 5 years to create the perfect scent to represent the artistic bohemians who wander the earth or making a candle that smells like a specific path in Grasse, France where one of the original owners used to take on his country walks in summer, they give the artist time.

As I walked through the bazaar, Myriam would pick up each object with child-like excitement. She explained to me, “I believe in freedom and creativity. The freedom to imagine projects and create partnerships with artists.”

You can see this approach put into place through the handmade porcelain candle holders crafted in Portugal by local artisans. Or through the master French glass maker Vincent Breed who is creating one of a kind blown glass candle holders that, as he puts it:“Rides along the thin line between temporary and eternal. The subtle cracks and tiny bubbles in the glass act like mirrors, amplifying the light of the candle flame as well as the surrounding light.”

There is so much more to discover to this brand. See below for some of my favorite products and if you are in New York, the pop-up Bazaar in Brooklyn will be open until the end of the year and will be changing promotions every couple of months where you can shop the special 34 collection as well as some timeless brand favorites. 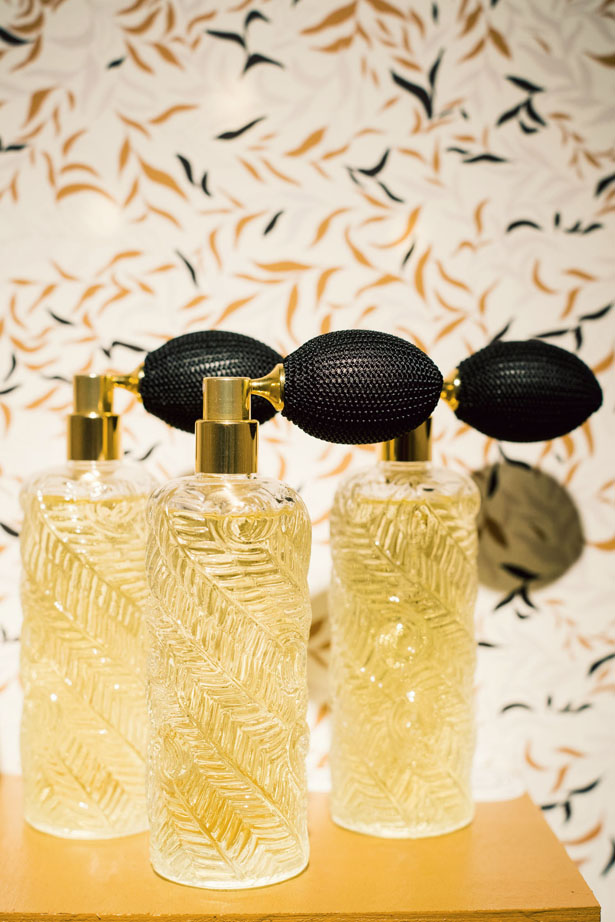 Above, a limited edition perfume made of mille fleurs, which means a thousand flowers, from Grasse, France. Each year Diptyque waits until the end of harvest to discover which organic yielded the most spectacular crop. In 2013, mimosa flowers were of exceptional quality and abundance. They release one fragrance per year in a limited edition celebrating the organic nature of life at its peak for each season and the whimsical essence of flowers that vary from one year to the next.

Below, and currently available, in 2015 jasmine provided the best harvest grown in the center of Grasse with its perfectly floral presence. This is the most beautiful jasmine perfume I have ever experienced. 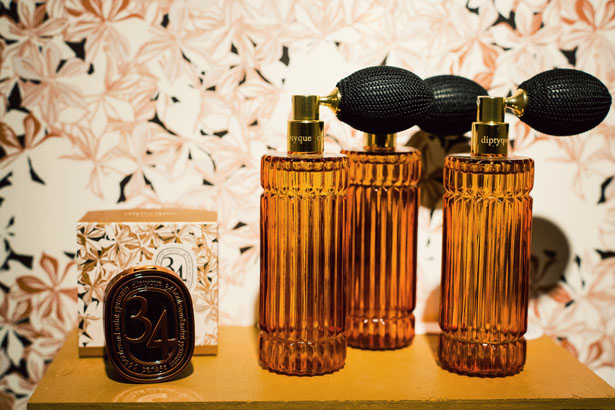 Below, the newest fragrance to soon be released as part of the Essences Insensees (sensory essences) collection for 2016 is Roses… you know how I feel about that.

“I used several different yet complementary rose extracts to create this unique composition. I captured the scent of a live rose which I blended with a rose centifolia absolute to render the scent of fresh rose petals. In the end, the rose infusion boosted the intensity of the fragrance, generating a one of a kind, almost tangible floral bouquet.” 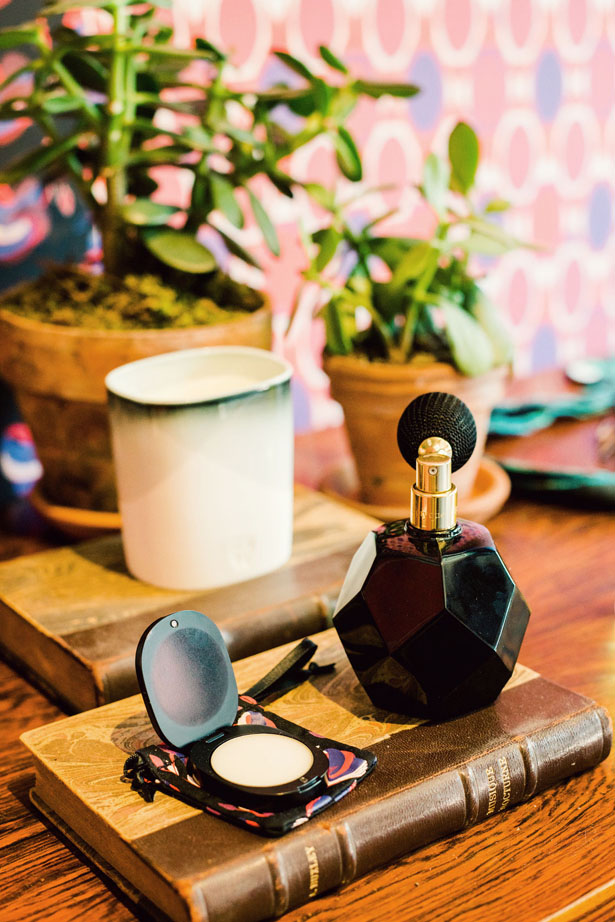 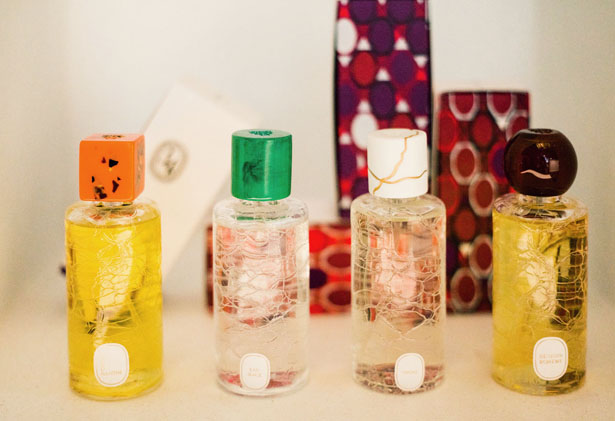 Above, The 34 Collection Perfumes, each with their own unique story. My personal favorite is Kimonanthe. Myriam received as a gift a little wooden Japanese box which traditionally kept powdered incense known as “zukoh”.  In Japanese tradition, you would rub the powder in the palm of your hand which purifies it and when sniffed, lightens your soul and spirit. They would also toss the powder into the air to help communicate with the divine. Using this woody scent as inspiration the perfumer Fabrice Pellegrin, they combined it with osmanthus, a white flower from Asian with a milky, apricot scent living on your skin like a smoky, mysterious, candied apricot flower… completely intoxicating and 100% mysterious. Even down to the detail of the orange resin cap, the creative director has these made by a jewelry designer inspired by the original beaded necklaces the co-founder of Diptyque used to make for their 34 Saint Germain store. 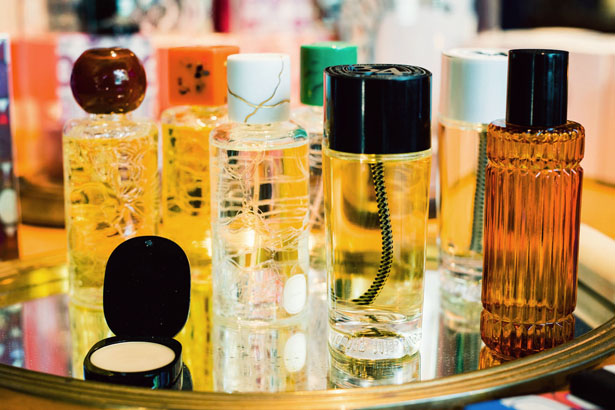 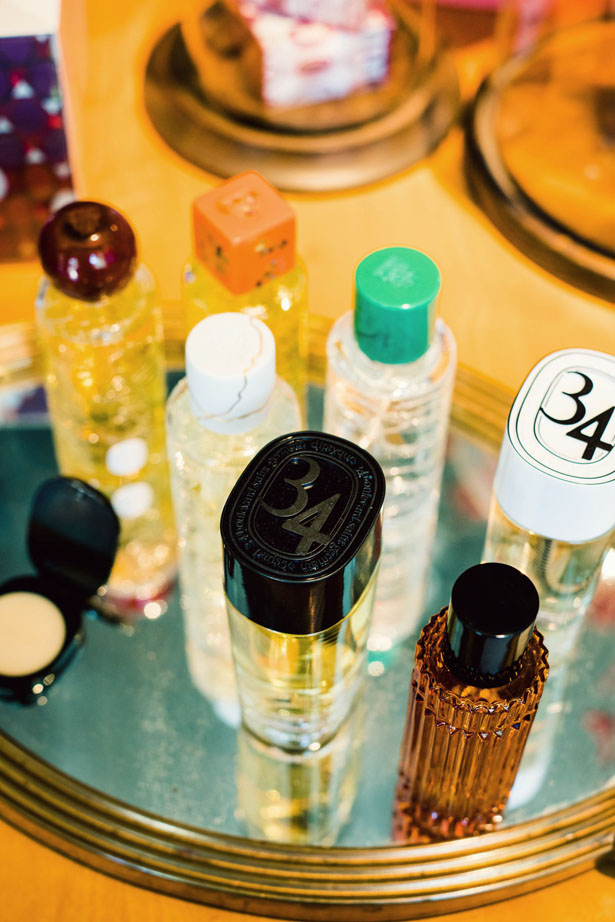 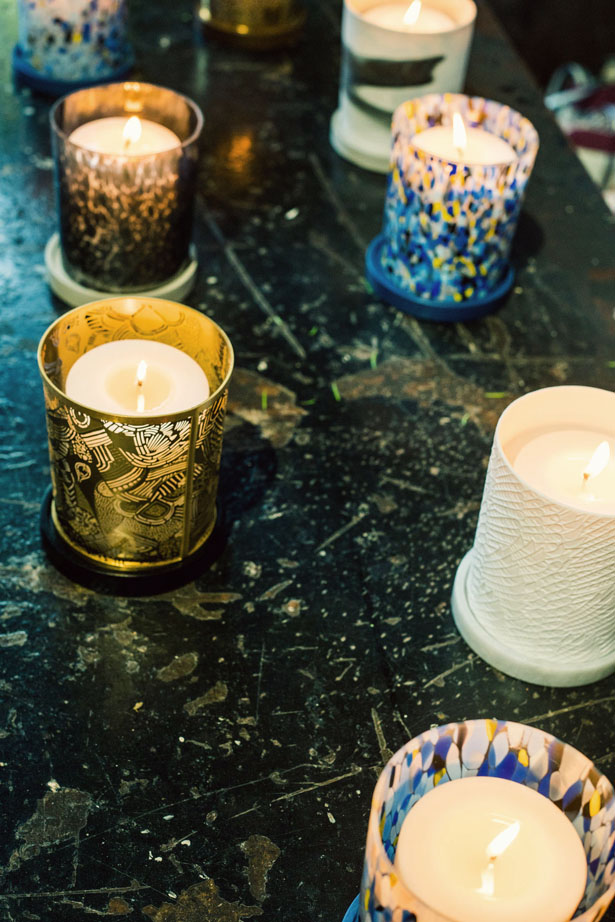 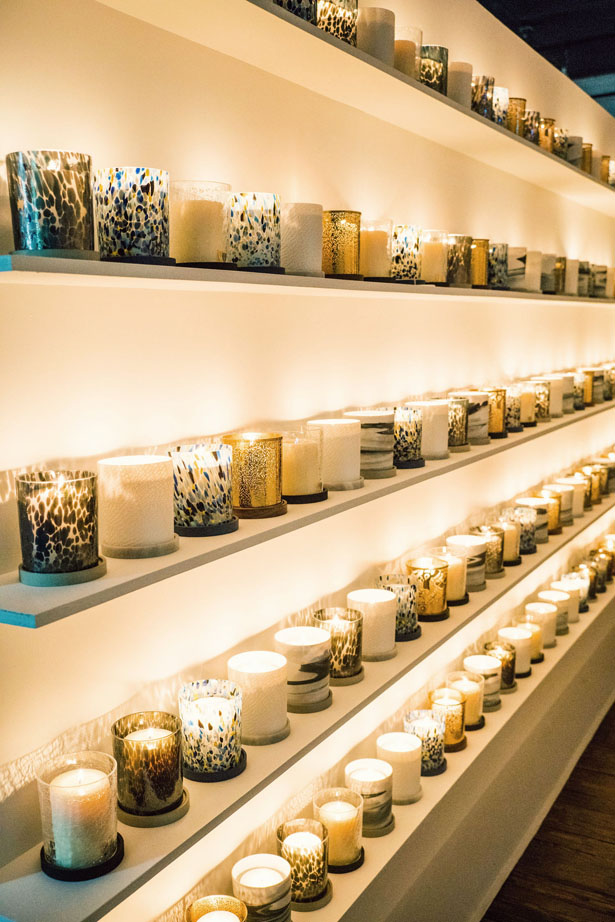 I was completely in awe of this massive candle wall. These special edition blown glass holders and reusable ceramics illuminate the room in a magical dance of movement and art. 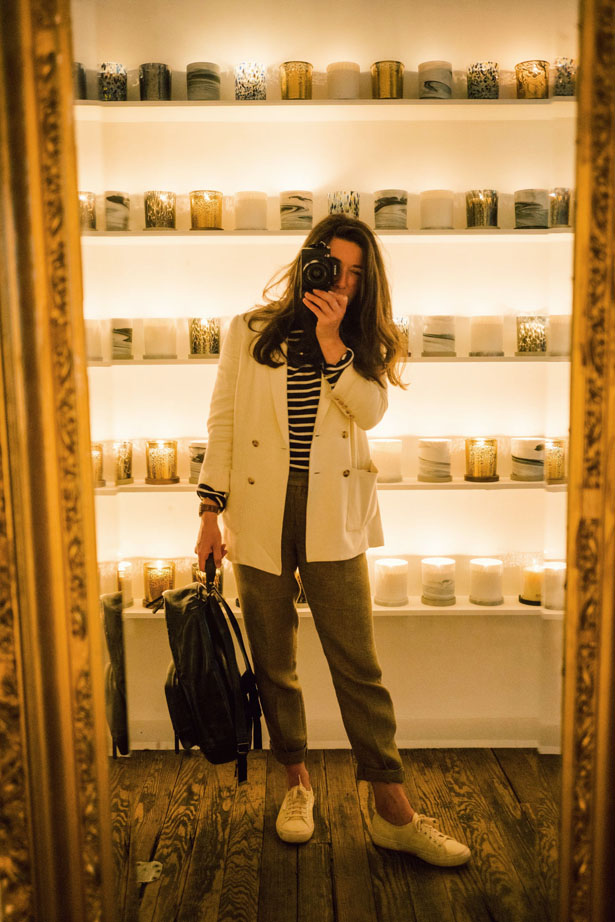 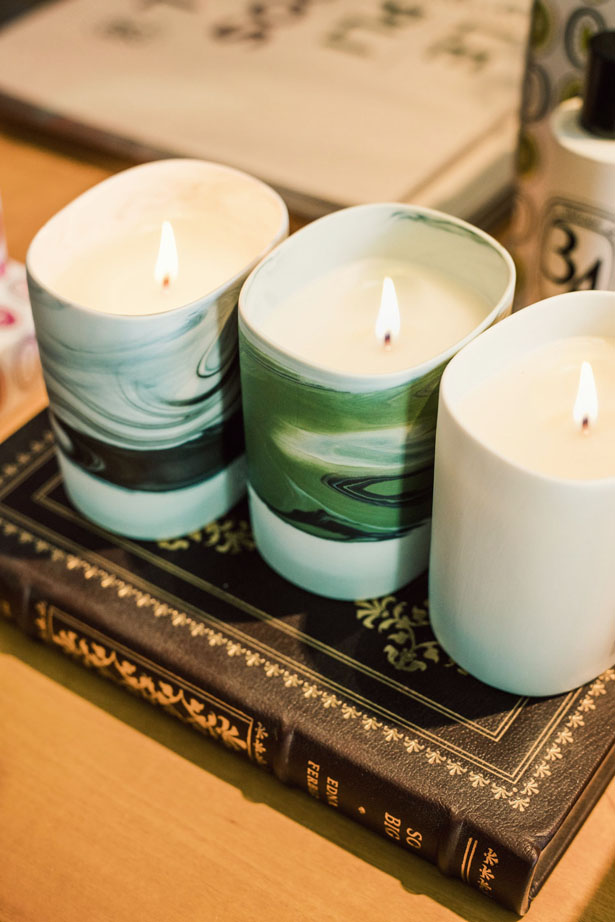 Above, three new scents added to the Dipytque collection.

Le Redouté: “…inspired by a potpourri created by Mrs. Merwin. It was a remarkable combination of dried roses and spices carefully prepared that was the result of a secret recipe handed down to her by her great grandmother, which according to her, dated back as far as teh Elizabethan era. The 3 founders of the brand immediately fell in love with the scent, and the Redoute sachets naturally found their place in the boutique. Several years later, a sachet of the pot-oourri found in a forgotten drawer inspired the brand to reinterpret this Redoute as a candle- a spicy, woody, floral fragrance where cinnamon, cloves and orange breathe warmth on abed of roses, cedar and amber.”

La Prouversesse: “La Prouversesse is the name of a lane that Yves Coueslant would take when he stayed at his house near Grasse. A path lined with fig and cypress trees, aromatic herbs and crunchy leaves. It was this sun-drenched trail that inspired the perfumer Fabrice Pellegrin to create a fragrance that incorporated the woody scent of fig trees and the rustic notes of the South of France.”

La Madeleine: “…when creative director Myriam Badault discovered that the Diptyque founders’ home in Normandy, aptly dubbed “Les Lilas”, was previously the post office where Marchel Proust used to send his mail, a brilliant idea dawned on her. In fact, it was more of a scent that came to her, one with universal appeal. That of a delicious madeleine, refreshingly lemony and comfortingly fluffy inside, like the one described by Marcel Proust in Swann’s Way, volume one of his literary masterpiece, Remberance of things past. So she asked the perfumer Fabrice Pellegrin to create a scented wax that would make connoisseurs’ mouths water. She told him about the famous Dax madeleines made by the Cazelle bakery, founded in 1906. A simple sponge cake that’s so irresistible even the raw, melted butter dough gets your taste buds dancing.” 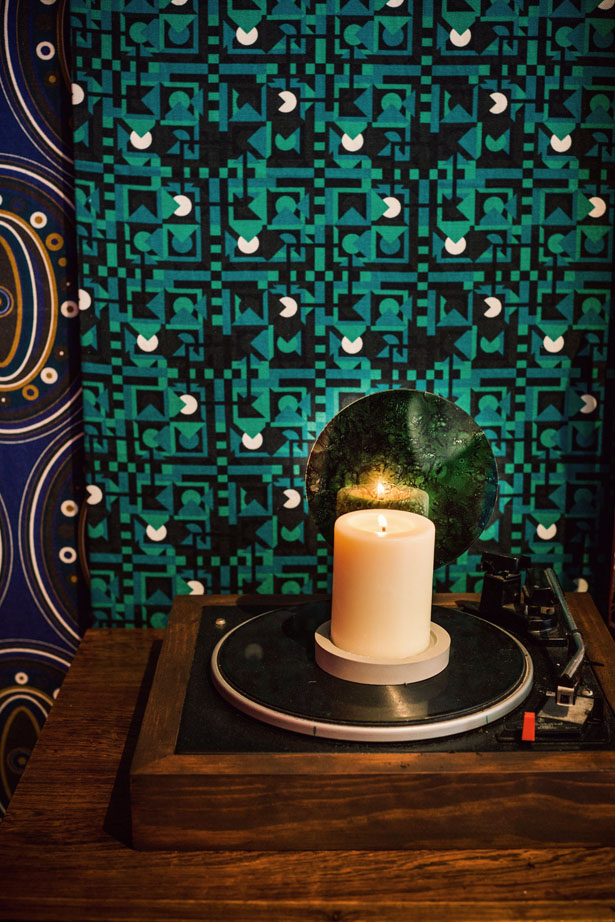 Above, a new reflection on the classic candle. Diptyque paired with Italian craftsman Massimo Borgna who specializes in antique mirrors to create these marbled smoky mirrors to reflect the light and mood of the room. 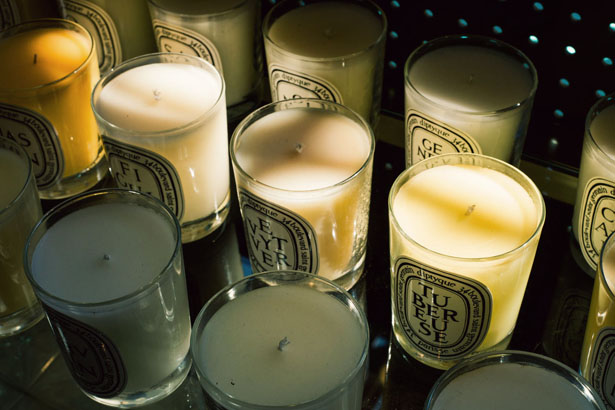 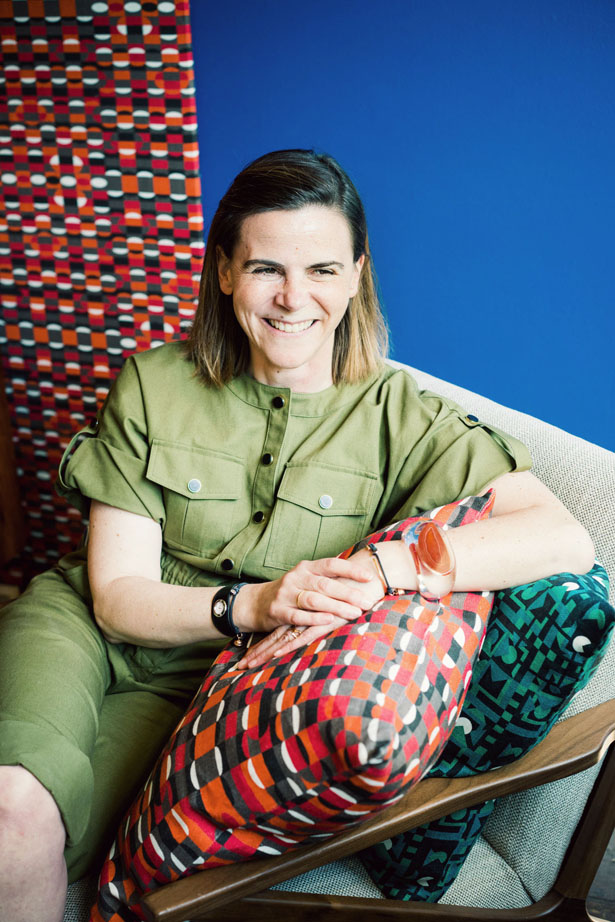 Above, Creative Director Myriam Badault at the Brooklyn Bazaar. Below, pillows recreated from a few of the original patterns from the 1961 collection. 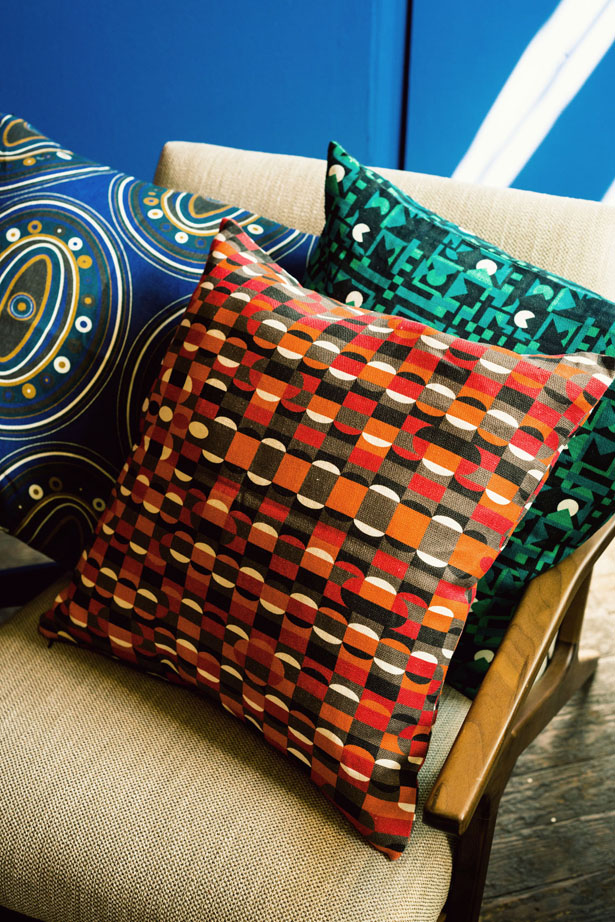 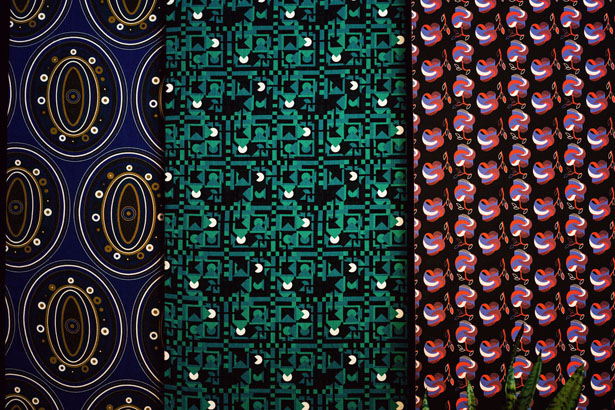 6 thoughts on “Discovering the world of Diptyque”