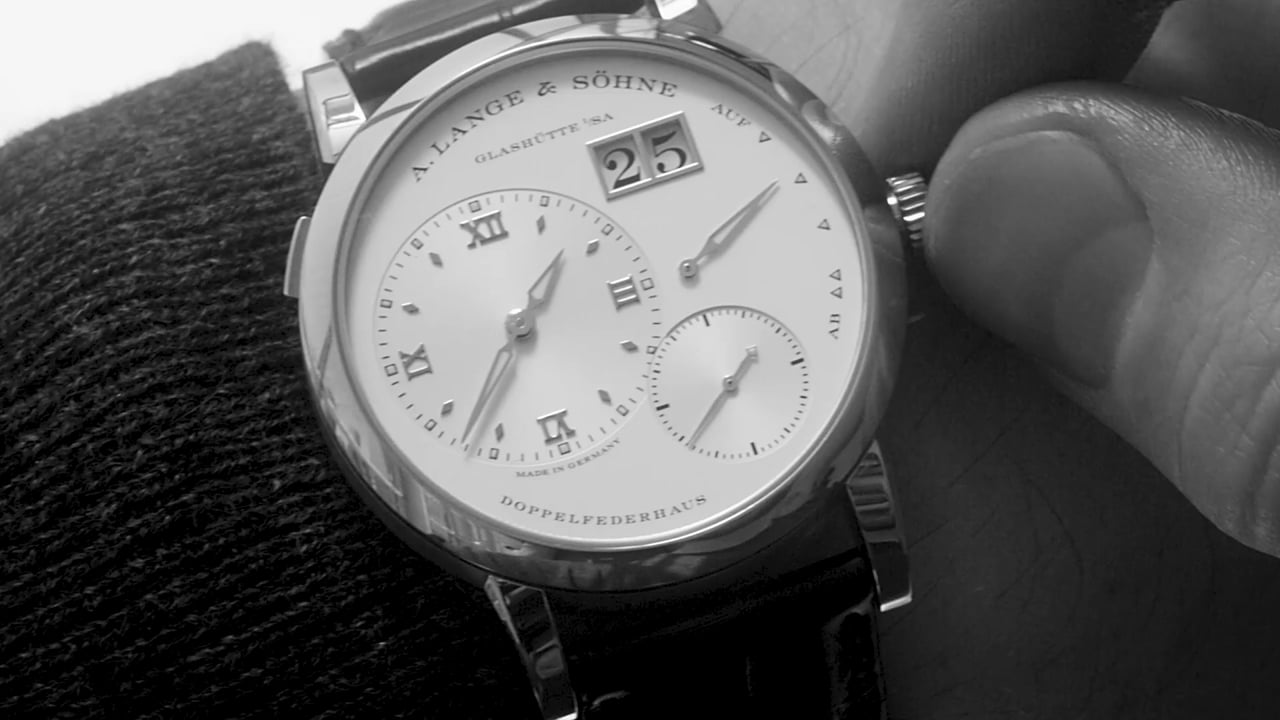 Making of a short film

Recently we created a video for A. Lange & Söhne, a German watchmaker founded in 1845, for the 2017 launch of the Lange 1 in white gold and Lange 1 Moon Phase in white and rose gold. I thought I would explain to you the creative concept behind the final video so you can see the thought behind just beautiful moving visuals of their stunning timepieces. When we work on brand projects such as this, we spend weeks in a creative think tank before ever picking up a camera. Every detail is pre-planned and every aspect of the video serves a purpose with meaning, even if it’s not meant to be obvious.

We wanted to draw a comparison between the craftsmanship and artistry of both photography and watchmaking by creating something both very technical and sentimental in our story telling. By studying the dial design and movement of the timepieces, we were inspired to explore the themes around human connection and our ability to traverse time and space, reach around the world in a split second, be as simple as the air we share, or as complex as a physical touch. The written words of one man from a century ago can reach another today and affect the choices he makes. We wanted to explore these connections as invisible threads of cause and effect, known as the butterfly effect, in a series of four themes of human connection: Air, energy & light, communication, and touch. As visual storytellers, we decided to not tell the story of human connection through a linear fashion but rather as ticking moments in the cinematic frames of our lives, beating in time and weaving together the fabric of life.

By using a special cinema camera called the Phantom we were able to stretch mere flashes of moments of time to many seconds, giving the feel of a photograph that has opened up.

We capture a man who is driving out of the city, the speed of the car creating wind that whips around a woman stepping out of a vehicle on her way to a meeting that ultimately blows through an office window whipping the papers out of a man’s hands. The air that touches us all, moving in masses of pressure dancing through the millennia.

Energy & Light captured through three times of day starting with a man who looks up in the sky and blocks the midday sun from his eyes while the same afternoon light falls through horizontal blinds across a woman in her office while another man creates light in the early evening by turning on a lamp. While we each experience these phases of light in a day, this also represents man’s progress through time from first only experiencing the natural light to then shaping it to ultimately, creating light from energy.

Communication also captures how we can be connected through time in past and present. The written word of man read today through modern means shown as a businessman on his iPad. The forms of communication we use now that extend beyond words as we become an image based society shown through the moment a female photographer raises her camera to capture a photograph which will be shared through another means of communication.

And finally, touch. Touch is one of the strongest way we shape our experiences with the short time we have in life. A shot setting the time on the watch is a representation of this theme. A woman, strapping on her watch is saying she is a conscience participant in the time she has to touch people’s lives. And perhaps, the most human of all touches, between two people, as a man reaches to guide a woman’s back through a doorway and be perhaps the touch that changes the course of their lives.

Time is of course a visual thing you can see through the movements on a timepiece such as these by A. Lange & Söhne, but, it can also transcend mere mathematical moments of our day. I think in this video we try to show how connected we all are, not just in our modern world through technology but through the history of time together.

About A. Lange & Söhne Timepieces

With uncompromising quality, each and every timepiece separates A. Lange & Söhne from other watchmakers around the globe. They do not distinguish between a sophisticated complication and a classic three-hand watch in terms of precision and dedication to detail and every Lange timepiece is endowed with an in-house designed manufactory caliber and equipped with a precious case made of gold or platinum. The three watches you see in the video above include the Lange 1 Moon Phase in white gold which prominently features the astronomical “moon phase” complication. The Lange 1 in white gold which has world-renowned recognition to the asymmetric dial design and prominent outsize date. The outsize date was actually inspired by the five-minute clock in the Dresden Semper Opera House. Lastly, the Lange 1 Moon Phase in rose gold features an elegantly guilloched, argenté colored dial with two golden moons.

You can find out more on A. Lange & Söhne’s website here. 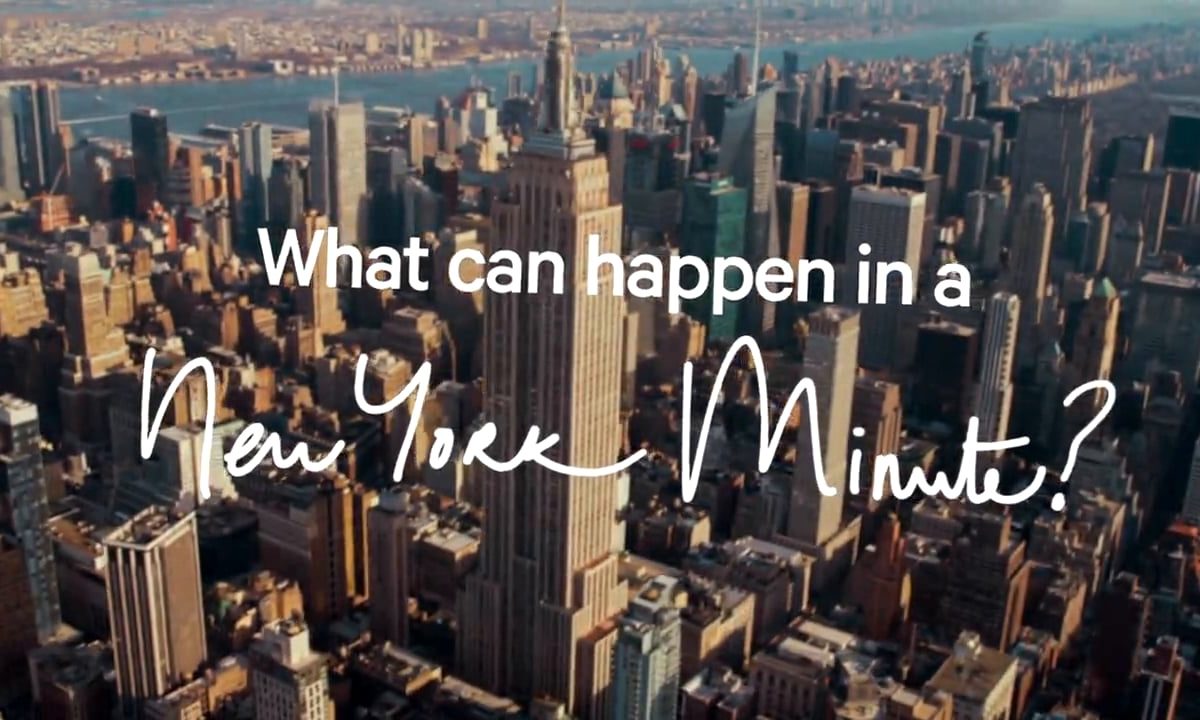 When Tiffany & Co. approached us about shooting four influential New Yorkers to launch their new line of watches, Tiffany CT60, named after founder Charles Lewis Tiffany, we felt right away drawn to the project. First, we would get to know four inspiring, hardworking, visionaries that aid in the character this city is built upon. We would have intimate conversations about how we spend our time in this great city we call home and just what does a New York minute mean to them. Which each passing beat of time we measure into fleeting seconds, how much can you accomplish in a NY Minute? To celebrate the launch of Tiffany CT60, let’s spend some time together with these four astonishing New Yorkers.

“In my New York Minute I carry the trait of many New Yorkers by being able to do more in 60seconds here than in any other place in the planet. I pack so much into one min to make each second count.” 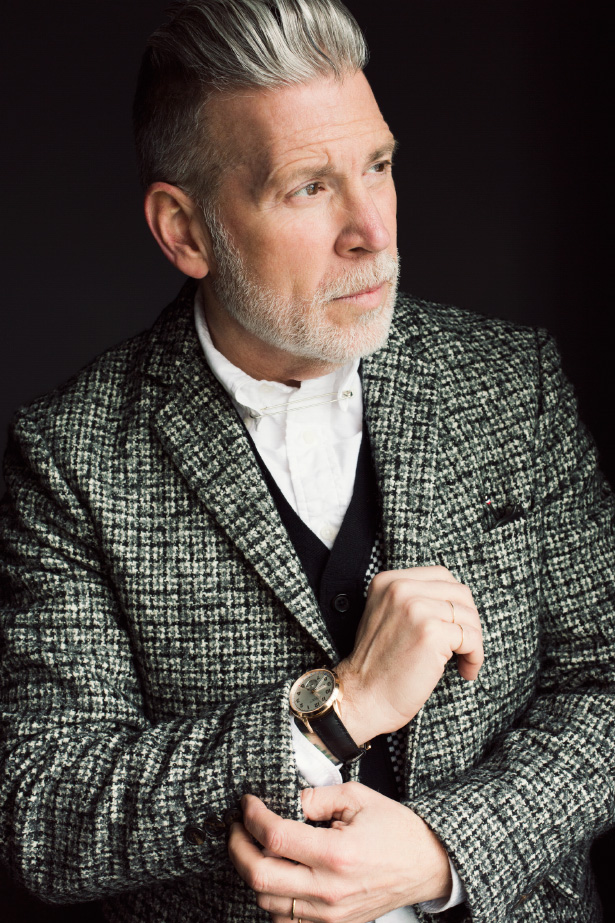 “In my New York Minute I leave my fear of failure and embrace New York’s entrepreneurial spirit that is so deeply entrenched into the fabric of New York and our desire for self improvement and betterment. Salvador Dali said: If it doesn’t exist in New York, it doesn’t exist.” 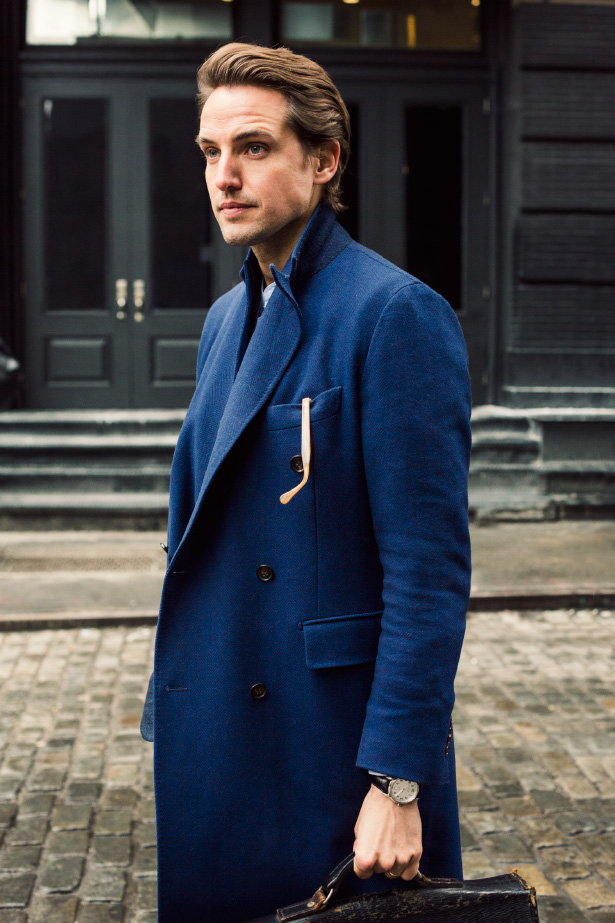 “In my New York Minute I bring the same drive and passion I put on the field to my time in New York. A true New Yorker pulls up their boots no matter what, you just do what you got to do.” 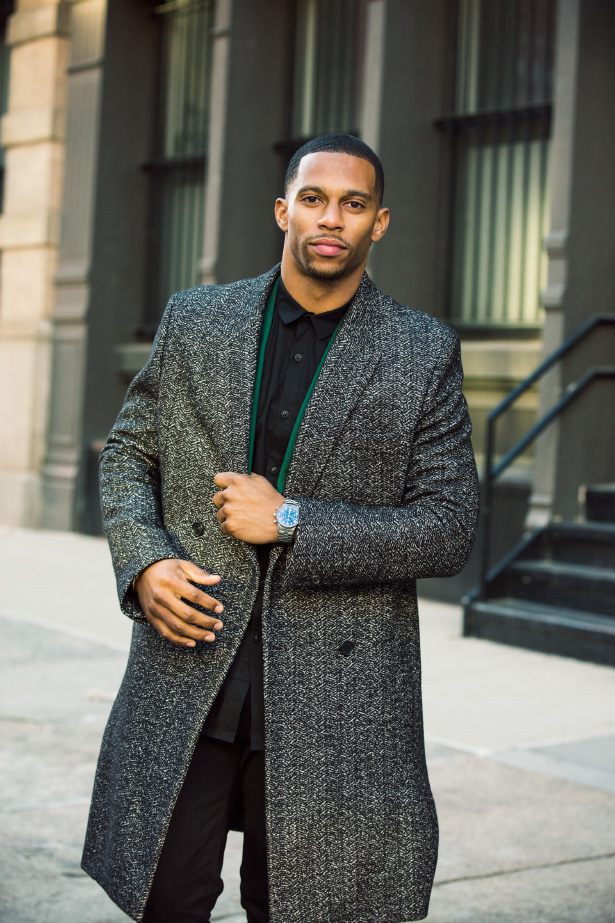 “In my New York Minute I remember why I came here, to be at the center of the culinary world, to feel the energy and be inspired by the artistic communities and ultimately spend my time having everyday experiences you can only find in New York to reinterpret into what I create” 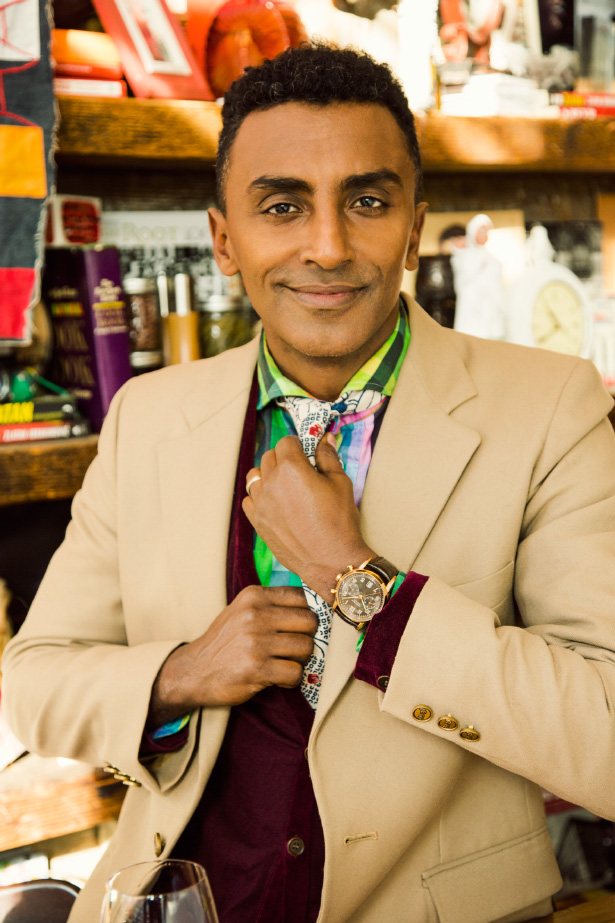 In-between shots, while Jessica was waiting for me to finish setting up, I looked over and there she was, just killing time, running her finger around the ardoise diamond faced IWC Portofino midsize watch and I thought there could not be anything more glamorous than lace, winter light, and a black wool coat so casually and effortless resting against a simple white wall… 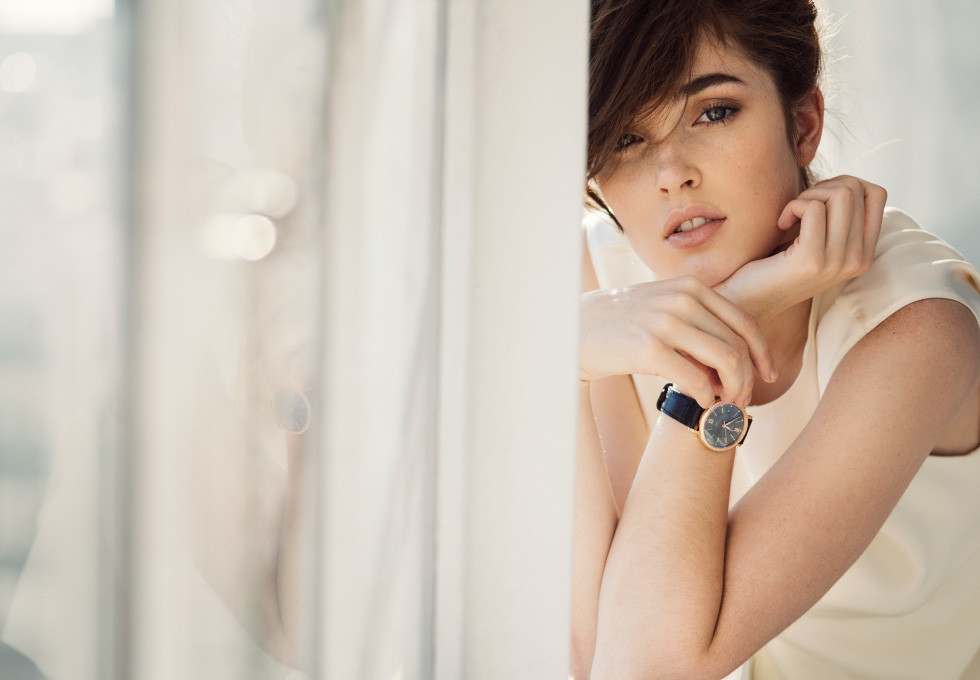 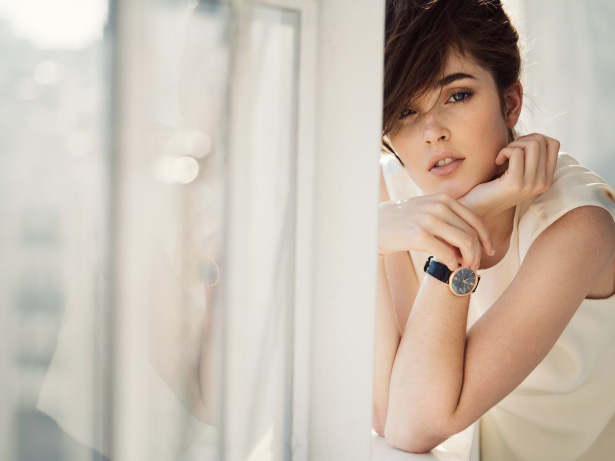 After our day together in New York City I was really taken to the idea of wearing a timepiece and started thinking about how that could integrate into my daily wardrobe from working days to all the holiday parties coming up. I was talking to my friend Laurel about this, who herself has such amazing taste (remember THIS shoot?!), on updating timeless dressing. I loved the idea of wearing a watch; it says a lot about a person, and with the IWC Portofino Midsize I think that says someone who is classic, intelligent, and above all timeless.

But let’s look at timeless dressing.

Laurel and I discussed how to make it more interesting, how to update the standard little black dress, how to do something surprising with a wide leg trouser… so in a sun filled studio on Manhattan’s west side we played dress up with Jessica Wall, with our city shining bright in the background, and spent together that thing that is the most valuable of all: time. 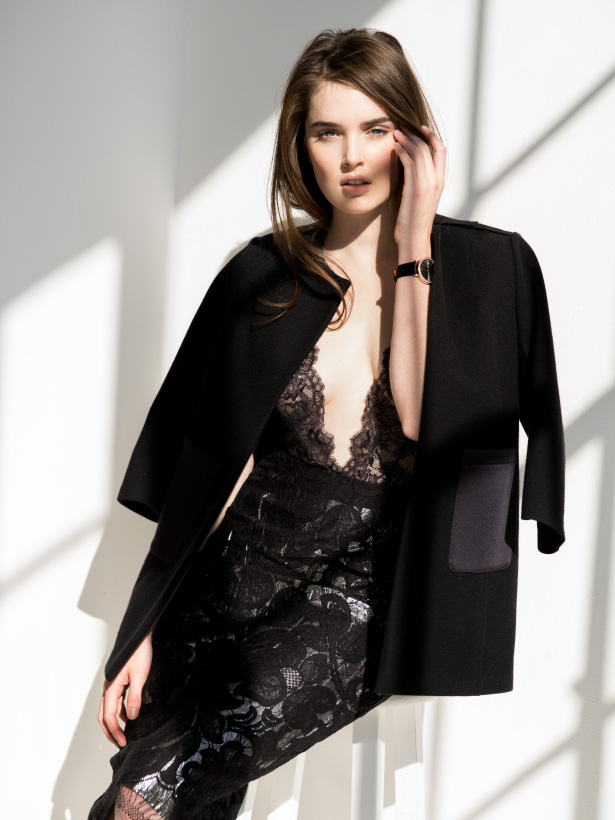 The best thing to wear with black lace is more black lace.